State of State Giving Away Football Signed by Bill O’Brien 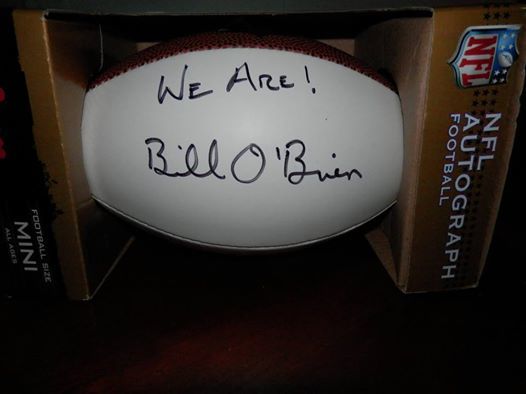 Die-hard football fans and Bill O’Brien lovers rejoice: There’s an easy way for you to enter to win a football signed by our beloved head coach.

One of Penn State’s newest student organizations, State of State, is all about fostering dialogue about big issues on campus. Unfortunately, their following isn’t large enough yet to start the kind of conversations and debates that they’re hoping to facilitate. That’s why State of State decided to hold a social media raffle where anybody who likes their Facebook page and shares this post on Facebook will be entered to win a football signed by Bill O’Brien.

“The goal is to get people to like our page so that State of State’s posts start showing up on their timeline and they begin to understand who we are,” said Alicia Thomas, the group’s marketing chair. “We know how much people love Bill O’Brien, so we’re excited to offer this prize in exchange for developing some brand recognition on campus. Hopefully once people like our page, they’ll start commenting on posts, and the dialogue will go from there.”

The contest will run from October 27 to November 15. State of State will announce the winner on November 18. Good luck!

Share via
State of State Giving Away Football Signed by Bill O\'Brien
https://onwardstate.com/community/state-of-state-giving-away-football-signed-by-bill-obrien/
Follow @onwardstate
Send this to a friend