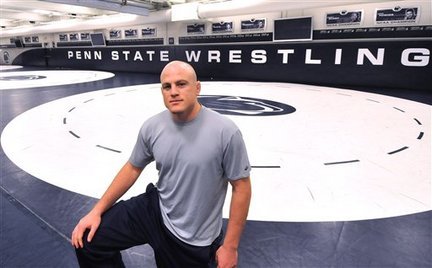 It has been since 1953 when the last Penn State wrestling team– or any east coast school for that matter– won a national championship , but with an 11-0 record and a No. 2 ranking the 2011 squad is heading in the right direction to break the 58 year drought.

And after a two-week break, the No. 2-ranked Nittany Lions will continue their national championship campaign on national television (Big Ten Network/6 p.m.) against No. 22 Pittsburgh on Friday in Rec Hall.

Although they have beaten five ranked opponents already this season, head coach Cael Sanderson is weary of the Panthers and vows to have his team prepared for another top-25 opponent.

“Every time you wrestle Pitt or play them in any sport it is a big deal for the university,” he said. “It is one of those rivals you heard about so we want to be at our best.”

According to Sanderson this is the time of the year when the true grit of his wrestlers will be tested.

“When you get to this time of the year,  it is part of the game,” Sanderson said at Tuesday’s practice. “You are going to have a lot of good matches, and you are going to get to tested.”

Injury Report
Besides the stronger competition some of Sanderson’s students may face, the team is also facing adversity on the disabled list, which could bog down any postseason success.

Friday’s match will be the first meet without true freshman Frank Martellotti, who had been ruled academically ineligible for the spring semester. Martellotti had a very successful first-half at 125 pounds where he posted an 18-3 record while filling in for an injured Brad Pataky.

But luckily for Sanderson, Pataky is returning from his knee injury just in time to reclaim his position. As a redshirt senior and a two-time national qualifier, Pataky will carry a No. 11 ranking into Fridays match.

Sanderson also had good news for Penn State fans when he announced All-American Quentin Wright will return to action Friday night. Wright injured his shoulder during the Nittany Lion Open (Dec. 5), and has been out of action since.

After the dual meet versus the Panthers the Nittany Lions will travel west to face Big Ten foe Indiana on Sunday.