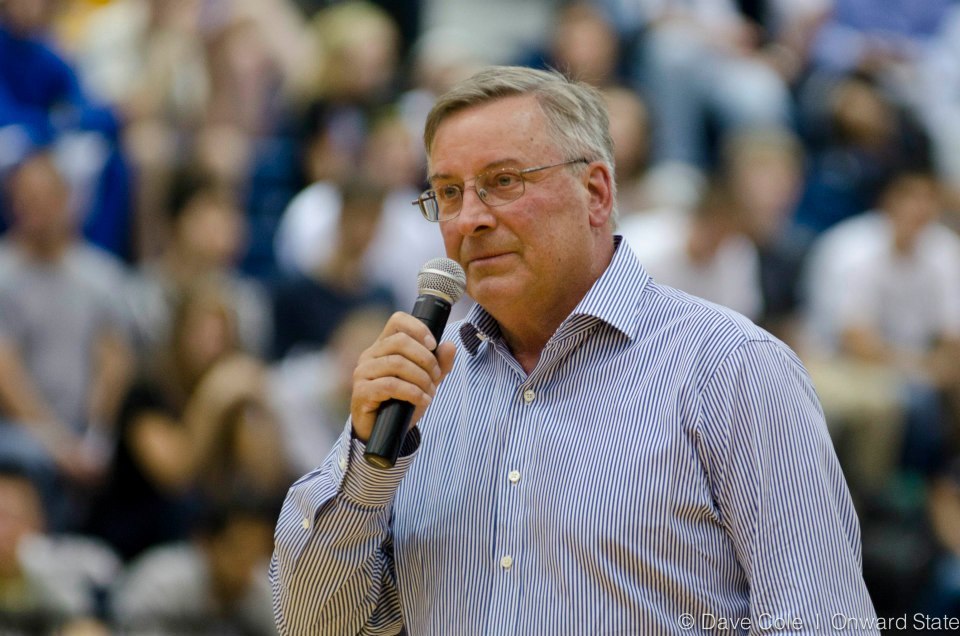 The future of Penn State football might have been salvaged last night in the form of an oil tycoon with a $1.3 million check.

The story, as we know it, is still rather vague. Bill O’Brien interviewed with the Browns and the Eagles, a Twitter uproar ensued, and he finally leaked his decision to stay at Penn State sometime late Thursday night.

The meltdown that would have materialized had O’Brien decided to jump to the NFL is a situation that is hard to comprehend. College coaches change all the time but the fragile nature of Penn State right now cannot be overstated. One of the most daunting parts of the NCAA sanctions allows players to bypass NCAA transfer rules and play at another school immediately — essentially, any Penn State player can enroll at another D-1 school until fall practice starts on August 1st without sitting out a year, which is the standard rule. Had O’Brien bolted for Cleveland or Philadelphia, you would have to think a mass exodus of players would have followed in search of more stability as Penn State searched for its fourth head coach in a little over a year.

Perhaps an even greater importance for the future lies in the 2013 recruiting class, including coveted 5-star commits Adam Breneman and Christian Hackenberg. Breneman and Hackenberg have admitted that O’Brien is one of the main reasons they both chose Penn State, and without his tutelage it’s an almost certainty that Hackenberg would have decommitted.  Breneman — who enrolled early and is starting classes on Monday — may very well have followed.

On top of that, the betrayal the Penn State community would have felt after a magical 2012 season is simply immeasurable. Justifiably or not, O’Brien is the most visible leader in Happy Valley at a time when true leadership seems in short supply.

Suffice it to say that if Bill O’Brien had left, the abyss in which the program would have sunk is almost unfathomable. Penn State fans aren’t yet conditioned to the big business of college football, but we all got a rude awakening yesterday. O’Brien might only stick around for one more year, but make no mistake about it: the value of keeping O’Brien for next season — after the asinine NCAA no-penalty transfer deadline has passed — is exponentially more valuable than any other year on his contract.

It would have been bad. Real bad. And more than anyone else, we have one man to thank for that.

Terry Pegula is one of Penn State’s wealthiest alumni. A 1973 graduate, Pegula cashed in on his oil company East Resources — which includes Marcellus shale stakes in New York, Pennsylvania, and West Virginia — for $4.7 billion in 2010. Pegula, along with trustee and investor Ira Lubert, are two of Penn State’s largest athletic boosters. Having already donated $102 million to build the new Pegula Ice Arena on campus, Pegula is also the principle owner of the Buffalo Sabres NHL franchise.

At some point during Penn State’s massive push to keep O’Brien on Thursday, the awkward question had to come up — how much more money can the university afford to pay? With cash already thin resulting from the paralel of a $60 million fine and decreased revenue, it couldn’t have been an easy discussion.

Luckily for David Joyner, he has the 367th richest man in the world in his rolodex.

Part of O’Brien’s conditions for staying included increased pay for his staff and a whopping $1.3 million raise, which has yet to be officially announced but is reported to have been financed by Pegula.

O’Brien acknowledged to David Jones that Pegula was a “major ally” in his efforts. With Pegula opening up his check book, O’Brien suddenly became the 3rd highest paid coach in the Big Ten at $3.6 million — just $700,000 behind Ohio State’s Urban Meyer — almost unthinkable for a second year head coach. For comparison, O’Brien now makes over three times more than what Joe Paterno made — whose highest total compensation was just over $1 million a season.

Sports Illustrated reported that O’Brien was leaning towards accepting an NFL position when he woke up on Thursday morning. O’Brien can say “I’m not a one-and-done guy” all he wants but if Pegula doesn’t pick up the phone, the result could very well have been catastrophic.

The “Thank You Terry” blog was so named because of Pegula’s $102 million gift to bring Division-1 hockey to Happy Valley. The $1.3 million Terry Pegula promised yesterday is only about one percent of that total, but in the end, it might turn out to be an even bigger reason to say thanks.

Share via
The Man Who Saved Penn State Football
https://onwardstate.com/2013/01/04/the-man-who-saved-penn-state-football/
Follow @onwardstate
Send this to a friend