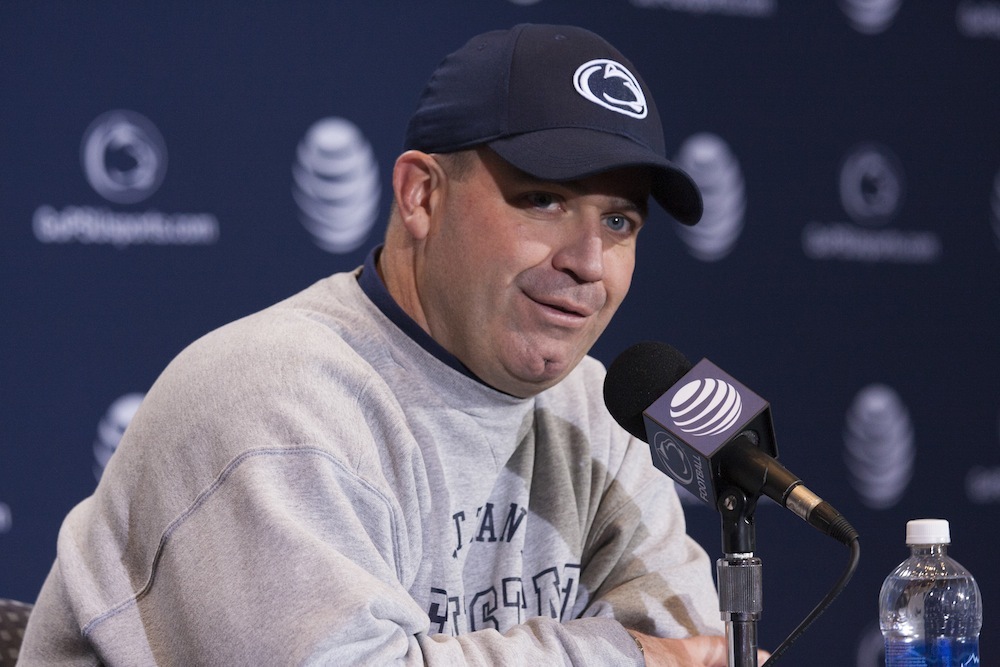 Bill O’Brien hasn’t faced Minnesota yet in his career at Penn State, but he offered high praises for the Golden Gophers during his Tuesday press conference ahead of this Saturday’s matchup on the road. The Gophers have been impressive this season, posting a 7-2 record thus far with conference wins over Northwestern, Nebraska, and Indiana. While they have played well on both sides of the ball, Minnesota’s offense is what has stood out for O’Brien while watching film this week.

But running isn’t all that they can do. Sophomore quarterback Phillip Nelson started off the season slow in the passing game but has improved on a weekly basis. He had his best game of the season on Saturday against Indiana, throwing for 298 yards and four touchdowns.

“He’s improved every week,” O’Brien said. “They don’t turn the ball over very much and he’s done a good job at that. I think he’s gotten better as a passer so that’s a big challenge for us because you know they can run the ball, but now they have the threat of the pass.”

The Gophers are solid on the other side of the ball as well. They have held opponents to 24.9 points per game. Minnesota’s best defensive player might be Ra’Shede Hageman, a senior defensive tackle that weighs in at 311 pounds. Hageman leads the defense with nine tackles for a loss so far this year.

“He’s one of the better defensive linemen we’ve gone against,” O’Brien said. “He’s explosive and he’s quick. You have to double him, get help from places you don’t normally get help from, know where he is on every single play, and try not to have him single-blocked.”

It wasn’t just the players that O’Brien spoke highly of when asked about Minnesota on Tuesday afternoon. O’Brien took time to praise head coach Jerry Kill, who has stepped away from his sideline duties to try and manage his epilepsy.

“I have a ton of respect for him,” he said. “I feel bad for what Jerry has had to go through this year. I called him a couple weeks ago to see how he’s doing. He obviously has a great coaching staff and they’ve done a good job to promote unity in their players.”

“That’s got to be really difficult [to be an interim coach],” O’Brien said. “I don’t know how you can even prepare for that. Obviously, there’s a great bunch of assistants with him. That’s a staff that’s been together so they understand what Jerry Kill wants and they’re able to carry out those orders and be good soldiers and Tracy is the lead dog on that. This is a really good football team.”

Here are the rest of the highlight’s from O’Brien’s presser:

On the injury front: Ryan Keiser’s hand is healing well. Ben Kline is still nursing a shoulder injury but will play against Minnesota. Akeel Lynch sprained his MCL against Ohio State and is currently day-to-day. There is also a stomach bug going around.

On how the season has gone: “Obviously we’d like to be 8-0. I think we’ve played tough and battled hard and competed. It’s been up-and-down at times. After the season is when we’ll focus on that and see why that was. Right now it’s important for us to level it off and continue to compete and play well.”

On the run-ons: “The run-ons have really contributed. On our kickoff team last week, we had a couple guys tackling the returned inside the 20-yard line and those guys were run-on players. The run-ons are a lot of fun to coach and watch them practice and see how hard they play.”

On Ryan Keiser: “He’s a very valuable member of this football team from the type of kid he is to the type of player he is and the maturity level he brings to the locker room. I think he’s an instinctive player. He was a little rusty when he first came back from the hand injury. He really played a lot better against Illinois.”

On Bill Belton’s conversion to running back: “When we first got here, we started having those crack-of-dawn workouts. I remember that the way he had it set up, I think it was the first one, we had a lot of change-of-direction type drills to evaluate these guys.

“I didn’t watch any film on these guys before I got here. I was trying to give everyone a clean slate. So when I saw Billy, I saw a kid who was 5-11 and maybe 185 pounds and just a thick-looking guy. I asked what position he was and they said he’s a slot receiver and a Wildcat quarterback. And I said I think that looking at our running back situation we should try him at running back.

“He really improved a lot in training camp his first year and then had a bad ankle sprain against Ohio and never really hit his stride when he came back from that. This year, I saw this kid really improve to the point he’s at now where he’s playing really well.”

On Anthony Zettel’s knack for making tackles for a loss: “He makes a lot of plays. He plays extremely hard and plays every play like its his last. He’s also a very strong player and has great playing strength, so he’s able to explode off of blocks and make a tackle for a loss.”

On his relationship with Christian Hackenberg: “We have a really close relationship. I recruited him, I know his family, and I’ve been in his living room. I’ll be the first to tell you that many times at the beginning of the year I had to be more patient with him. I try to get him on the bench and just go over drives and I think that helps a lot.

“When he makes a mistake that he knows what he did or he makes the same mistake twice, which doesn’t happen very often, that’s when I lose my patience with him a little bit. But we have a very good, open, and honest relationship. On Saturday, he got mad at me because he got hit on the side of the head and I wanted him to get checked out but he screamed back at me that he’s alright.”

On Matt McGloin seeing his first NFL action: “I couldn’t be more proud of Matt McGloin. He’s a self-made guy, a competitive guy. He deserves everything he’s getting and maybe he’ll get a shot to start. He led them down the field on a couple long drives. Nothing that he does surprises me. He’s a guy that’s worked very hard to get where he’s at.”

Share via
O\'Brien Praises Minnesota Ahead Of Saturday Matchup
https://onwardstate.com/2013/11/05/obrien-praises-minnesota-ahead-of-saturday-matchup/
Follow @onwardstate
Send this to a friend