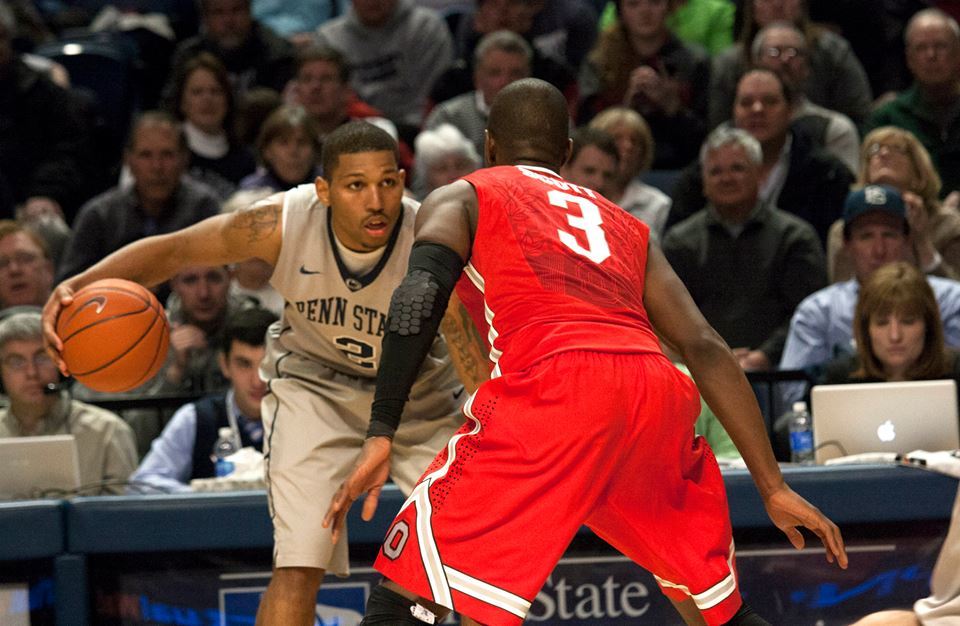 With the win, the Lions swept the two-game season series with the Buckeyes; three weeks ago, Penn State downed Ohio State in Columbus, 71-70, in overtime.

The improbable win by Nittany Lions didn’t start out in the best way, though, as Aaron Craft scored five of Ohio State’s first seven points on its way to an early 10-2 lead, silencing one of the Lion’s largest home crowds of the season.

“They were playing much better basketball since we last played them,” said D.J. Newbill. “We came in with a much different approach.”

Despite trailing for the entirety of the half, Penn State made three of its first five shots, before missing five of its next six. The Lions found themselves down 22-11 with 8:54 remaining in the half before a Frazier fast-break layup stopped the Buckeyes’ run.

Frazier led all scorers in the half with nine points. He entered the game needing only three rebounds to become the second Big Ten player ever with 1,000 points, 600 assists, and 500 rebounds in a career. He’d gather only one board in the game, and added 16 points.

Frazier and fellow senior Zach Cooper were honored before the game as part of senior night festivities. Cooper and center Jordan Dickerson each recorded their first starts as Nittany Lions.

“I was trying to hold back tears in the beginning,” said Frazier. “Coach sat me down and I came back ready to play.”

“He put so much into this program,” said coach Patrick Chambers. “You can’t blame the kid for feeling jacked up.”

At the under-four minute timeout, the entire Penn State football coaching staff came onto the floor. James Franklin was met with a roaring ovation.

The unanticipated appearance seemed to spark the hitherto languid Lions, who ended the half on a 9-3 run to bring the halftime deficit to two points, 28-26.

Penn State rode that momentum into the second half. Three D.J. Newbill foul shots found the Lions tied for the first time since tip-off. A Brandon Taylor 3-pointer with 15:15 remaining gave Penn State its first lead, 36-35. Jordan Dickerson followed with a monster put back dunk.

Then Newbill took over, scoring seven of the Lions’ next nine points, before the Buckeye’s once again tied it up at 49 with 6:38 remaining.

With Craft on the bench with four fouls, Newbill continued going to work. His 3-pointer right before the under four-minute timeout found the Lions ahead, 55-51.

“Not having Craft in there kills us,” said Ohio State head coach Thad Matta.

“[Geno’s] been great,” said Frazier. “He stepped up to the occasion, he was active everywhere.”

Penn State has had nine Big Ten games decided by five or fewer points this season. It wasn’t going to let this one slip through its grasp.

The Lions had a 64-59 lead with 39 seconds to play. LaQuinton Ross made two foul shots for the Buckeyes, Shannon Scott forced a steal, and Trey McDonald laid it in, bringing Ohio State within one.

However, the Buckeyes would not score again, and a last-second 3-point attempt by Smith fell short. Nittany Nation stormed the court for the first time this season.

“We got beat pretty good by Iowa,” said Chambers. “I think we were mad. We played desperate and we played angry tonight.”

The Lions will be back in action this Sunday, when they host Wisconsin at 12 p.m.

“We need to pack this place [Sunday],” said Chambers.