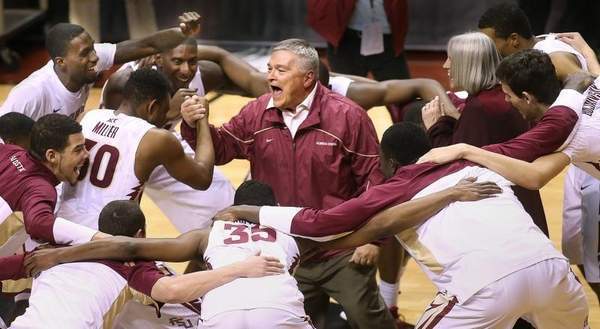 It’s been a week of goodbyes for incoming Penn State President Eric Barron as he begins his transition into Old Main this week. Barron will officially take over the reigns from Rodney Erickson after the spring semester, but his last day at Florida State will be on April 2.

“I would like to pay for the first 5,000 students who wear garnet to the game,” Barron said. “Why? Because I want to send our team to the NIT finals at Madison Square Garden knowing what FSU support really means.”

Barron also participated in a farewell ceremony on Thursday with students, colleagues, and the community to celebrate his four years as president.

“I don’t think I’m ever going to say goodbye,” Barron said. “This is my institution, I’m an alum, I think these friends are lifelong friends, I think I’m going to spend the rest of my life watching this university get better and better…In a way, I’m not leaving. Don’t stop, keep going, keep your foot on the gas, keep going. This is a great place and they’re ready to climb even higher.”

These three FSU students even dressed up as Penn Staters and made Barron masks to pay tribute to their former president:

The news articles coming out of Tallahassee tell a story of a beloved president saying goodbye to his students. Tallahassee Democrat columnist Gerald Ensley wrote “Barron Deserves Our Thanks” last week, and included high praise for our new president:

In four years, he became something close to beloved, and now he departs with the crowd yelling, ‘More, more, don’t go.’

The basketball team rushed him after Wednesday night’s NIT victory, each player wanting to shake his hand. The same day, 60 members of FSU’s racquetball club showed up at 6 a.m. for his morning game, each wanting to play a few points with him.

No small part of Barron’s appeal to me was we were contemporaries. We were born two months apart and both enrolled as freshmen at FSU in September 1969. I lived in Kellum Hall, he lived in Smith Hall. We didn’t know each other. But we were part of the same experience at the same time in our lives.

Last year, I wrote a story on Smith Hall, and we spent nearly an hour touring the residence hall. He slipped a note under the door of his old room, just to say hello to the current occupants. Later, one of those students came flying out of the elevator to see if it was really the president of the university who left him a note. Barron and the student talked for 10 minutes, trading stories about Smith Hall then and now.

Molly Barron was also beloved by the university community. She developed a special affection for the Florida State Marching Chiefs, and got to direct them one last time at the farewell ceremony.

And, at the very least, Barron has Penn State’s selfie-culture down: