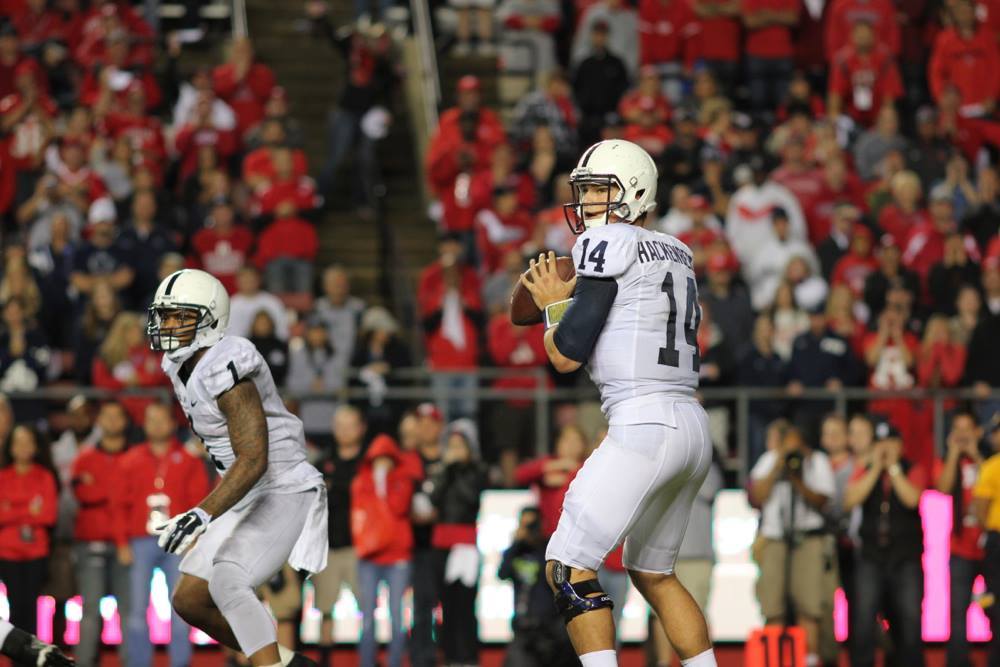 Welcome to another Saturday in Happy Valley! The 3-0 Penn State Nittany Lions are set to take on the 0-3 UMass Minutemen in what should be a one sided affair. The Nittany Lions are coming off of an exciting win last Saturday night against Rutgers, a game in which quarterback Christian Hackenberg broke the Penn State career 300 yard game mark. The Nittany Lions are looking to get their struggling running game going against a UMass defense that allows an average of 218 yards a game on the ground.

We will be using a new tweeting format for the game. Be sure to follow both @OnwardState and @OnwardStSports — our sports-specific Twitter account — to receive the full game experience. Our main account will tweet photos, big plays, and other interesting information throughout the game, and @OnwardStSports will tweet play-by-play, statistics, and analysis. You can also follow along with the game on Facebook. Our live blog will keep you up to date with analysis, photos, and statistics throughout the game. 7:00 4Q — It’s primarily freshmen and walk-ons in the game now for the Nittany Lions. Both teams are exchanging 3 and outs, and this game is slowly winding down.

End of third quarter — Sorry about the delay folks, the Beaver Stadium WiFi hasn’t been great today. DJ Crook and the second team offense is in the game, and just scored a touchdown! Brent Wilkerson caught the 11 yard pass from Crook — it was the first career touchdown for both players. Penn State leads 48-0!

8:10 3Q — Touchdown Penn State! Bill Belton lines up in the Wildcat, and hands it to Akeel Lynch who takes it 15 yards to the house! It’s 41-0 Penn State. After that drive, Christian Hackenberg’s day is done. DJ Crook will come into the game to replace him.

13:23 3Q — After the Minutemen receive the opening kick to start the second half, the Penn State defense holds UMass to a three and out. Penn State has it now, and is driving into UMass territory.

End of 2nd quarter — The Nittany Lions take a 34-0 lead into the second half. Looks like the run game has gained new life, as the unit combined for 149 yards and 4 touchdowns. A positive sign for a unit that has struggled mightily in the first three weeks. The offensive line is having itself a day, paving the way for Belton, Zwinak, and Lynch. 1:01 2Q — A great gang tackle by Nyeem Wartman and Jordan Lucas brings up 4th and short for UMass. As expected, they will go for it. UMass running back J.T. Blyden picks up the 1st.

1:24 2Q — Zwinak takes the handoff and bowls his way in for the score! His second of the day! 34-0 PSU. This catch by Hamilton helped set up the score. 1:44 2Q — Wildcat sighting! Belton takes the direct snap around the right and brings the Nittany Lions to the 1-yardline.

2:49 2Q — DaeSean Hamilton takes a slant 35-yards to give Penn State some nice field position to work with. Kyle Carter drops a screen, 2nd and goal at the 10 for the Nittany Lions.

3:33 2Q — The student section is loving every second of this one, folks. 4:25 2Q — GENO LEWIS! Christian Hackenberg lets a 38-yarder fly, hits Lewis down the right sideline. Great body control by Lewis. Offsides by UMass on the next play puts Penn State on the 5-yardline.

5:53 2Q — 11-yard completion by Hackenberg to Geno Lewis gives the Nittany Lions a first down. Hold on the following play moves the chains back 10.

7:29 2Q — Frohnapfels’ pass thrown short, brings up a 3rd down for UMass. TAROW BARNEY STRIP SACK. Frohnapfel falls on it, setting up a long 4th-24 for UMass. 9:25 2Q — A hold by the UMass offensive line negates what would have been a 1st down completion. FUMBLE ON THE FOLLOWING PLAY! Mike Hull knocks it loose and Austin Johnson recovers! Big scoring opportunity for the Nittany Lions!

10:11 2Q — TOUCHDOWN BILL BELTON. Set up beautifully by an outside block from TE Mike Gesicki that sends Belton to daylight! 13-0 PSU.

13:24 2Q — Turnover on downs! Frohnapfel’s pass sails and the Nittany Lions take over at the 30 yard line.

14:38 2Q — Brandon Bell sacks Frohnapfel for a 10 yard loss, but UMass WR Marken Michel picks up a nice first down. Frohnapfel almost picked off by Adrian Amos on 3rd down, will bring up 4th and 9 for UMass.

End of 1st — PSU ends the quarter with 69 rushing yards and 32 passing yards. Seems as though the offense is getting comfortable keeping the ball on the ground. An encouraging sign for a team that has lacked a reliable rushing attack.

1:52 1Q — Read option from UMass stuffed in its tracks, but Tajae Sharpe picks up the 1st down on the following play.

5:05 1Q — Akeel Lynch breaks off a big 46 yard gain, injecting some life into the offense. That was the longest rush of Lynch’s career Nittany Lions in scoring position.

6:22 1Q — Hackenberg really off on his throws so far. Throws one into double coverage that was nearly picked off. Luckily Sam Ficken hits the 42-yard field goal. 3-0 Penn State.

7:o2 1Q — Bill Belton shakes and shimmies up the left hash mark for a big gain, but Christian Hackenberg misses Geno Lewis on a post route. 2nd down Nittany Lions.

8:44 1Q — Zwinak stuffed on the 3rd down run, but Christian Hackenberg picks up the first on a QB keeper.

11:37 1Q — No signs of life from the running game, as Zach Zwinak stuffed on second down. Jesse James makes big first down grab on the following play.

14:10 1Q — Christian Hackenberg’s first two throws are incompletions, that’ll be a 3 and out for the Nittany Lions.

4:00 p.m. — UMass has won the toss and chose to defer. Von Walker and Grant Haley set to return for the Nittany Lions.

3:57 p.m. — The Nittany Lions take the field! Beaver Stadium is rocking, which means it’s time for some Penn State football.

3:36 p.m. — “We Are” chants can be heard echoing throughout the stadium, a sound that never gets old.

3:34 p.m. — Player introductions can now be seen on the scoreboards, which will in fact be showing the actual score today.

3:28 p.m. — Christian Hackenberg looking poised and composed as always as he goes through warmup progressions. 3:21 p.m. — The team converges in the south end zone, getting ready for pregame stretches.

3:08 p.m. — The stands are slowly beginning to fill in, as the position walkthroughs take place.

If you missed it yesterday, the Onward State staff is optimistic about Penn State’s chances today.