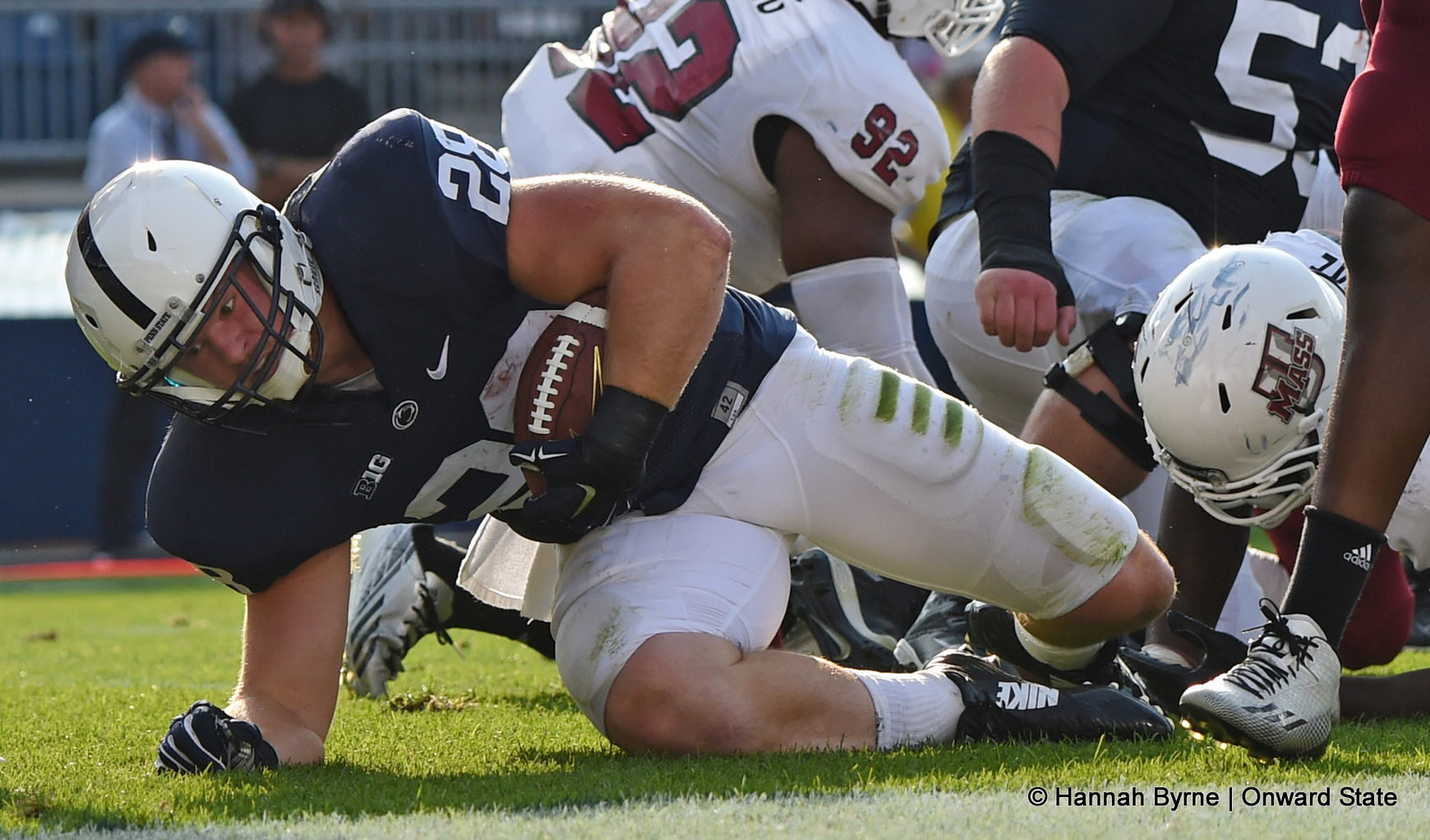 The Nittany Lions came into today’s game with plenty of questions concerning the offensive line and run game. Well, it’s safe to say that those questions are on their way to being answered in a 48-7 defeat of an overmatched UMass team.

This game was over before it started. The Nittany Lions were relentless defensively, firing on all cylinders. UMass quarterback Blake Frohnapfel and the rest of the Minutemen offense were held to 259 yards, most of which came through the air. Anthony Zettel and the Nittany Lion front seven showed no mercy, and kept pressure on the UMass offense all game long. The defense held the Minutemen to 2 total yards on the ground for the entire game.

James Franklin put his trust in the run game, and the investment paid dividends. The UMass front seven was no match for Penn State’s offensive line, as the unit paved the way to daylight for the three-headed running back trio of Bill Belton, Zach Zwinak, and Akeel Lynch. Highlighted by Lynch’s 46-yard sideline burst, along with Belton’s nifty 20-yard score, it appears that the Nittany Lion rushing attack has found its groove. The unit totaled 149 yards and four touchdowns in the first half alone, and racked up 228-yards for the entire game. The offense as a whole racked up a whopping 464 yards.

Christian Hackenberg was far from perfect, however, finishing 12-24 with 179 yards. The sophomore quarterback, who started the game just 3-10, looked erratic at times, sailing throws and missing open receivers. He seemed to calm down though towards the end of the game and find a groove. Despite the shaky quarterback play, the receiving duo of DaeSean Hamilton and Geno Lewis had their moments. DaeSean Hamilton flashed his explosiveness throughout, highlighted by a 35-yard gain off a slant route. Geno Lewis made some incredible grabs as well, but also showed a knack for making the big block. Hamilton finished with 4 catches and 65 yards, while Lewis led the Nittany Lions with 5 catches and 82 yards.

The run game’s success can be attributed to many factors, but all boils down to the play of the offensive line. The unit was much more consistent throughout, and opened up some big holes for Penn State’s trio of backs. James Franklin’s switch from Brian Gaia to Derek Dowrey at right guard made a significant difference, and the unit as a whole looked revitalized. The sloppy penalties and missed assignments are hopefully a thing of the past, because what the unit showed today was something it hadn’t shown all season.

Franklin knows that the Nittany Lions still have some work to do up front, however. “We haven’t shown that we’ve been able to [have success in the running game] consistently. [Consistency is] the next step.”

Breakout Performer: This honor is awarded to the Nittany Lions rushing attack. The unit’s 228 yard performance came out of nowhere, highlighted by Bill Belton’s 76-yard, 2 touchdown performance. Zwinak also chipped in with a pair of touchdowns, while Akeel Lynch led the trio with 81 yards and a score. This adds a new dynamic to the Nittany Lions offensive attack, which has been without a reliable running game all year. If the performance by Bill Belton, Zach Zwinak, and Akeel Lynch was indeed legitimate, then Penn State’s offense may have gotten the boost it needed.

Freshman Contributions: A 41 point cushion allowed for redshirt freshman quarterback D.J. Crook to make his debut, coming in for Hackenberg around midway through the 3rd quarter. Crook finished the day 6-9, with 57 yards and a touchdown to tight end Brent Wilkerson. The cushion also allowed for some new faces to give fans a glimpse of the future. Freshman wide receiver Saeed Blacknall got his opportunity, and responded with a pair of catches for 21 yards in limited action. This may not be the last time you see Blacknall, as he gives James Franklin yet another potential weapon in an already talented group of wide receivers.

Play of the Game: Bill Belton’s 20-yard touchdown run had it all. He took the direct snap out of the Wildcat, got some key blocks from the boys up front, and finished it off in the end zone. Special shoutout to Donovan Smith for the punishing block that gave Belton a massive hole to run through.

Quote of the Game: The quote of the game comes from none other than James Franklin.

“I’m pleased with the progress we’re making, but we’ve still got a long way to go. We’re 1-0 this week, we’re going to enjoy being 1-0, and we’ll start over tomorrow morning, getting started on Northwestern”