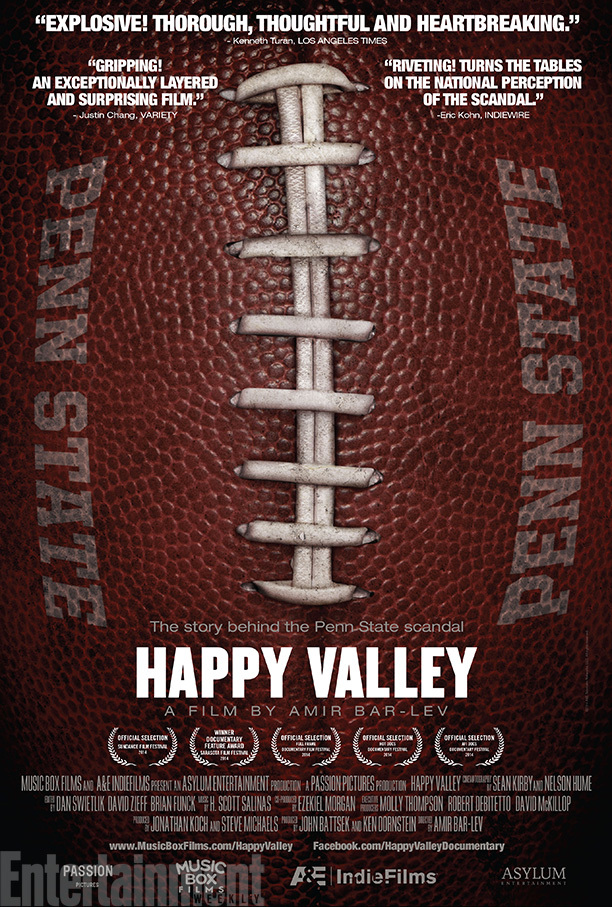 The official trailer for Amir Bar-Lev’s documentary ‘Happy Valley’ has been released.

The documentary premiered earlier this year at the Sundance Film Festival and will be released on November 19. A major focus on the film appears to be on Matt Sandusky, who reached a legal settlement with Penn State on claims that he was sexually abused by his adopted father. Sandusky appeared at the film’s premiere at Sundance.

“We really tried to make a film that provides a prism of different perspectives,” Bar-Lev said. “I hope that the film provokes people to ask themselves questions about their own pantheon of saints and heroes and villains. The reason it’s an interesting story is because it’s a universal story.”

The trailer, produced by Music Box Films, cuts from shots of football games, to the Sandusky trial, to the downtown riots after the Board of Trustees decided to fire Paterno.

Check it out here (it is unembeddable).

Here’s the film’s description, as posted on Sundance’s website.

“The town of State College, the home of Penn State University, has long been known as Happy Valley, and its iconic figure for more than 40 years was Joe Paterno, the head coach of the school’s storied football team. His program was lauded for not only its success on the field but also its students’ achievements in the classroom. And Paterno took on mythic national stature as ‘Saint Joe.’

“But then, in November 2011, everything came crashing down. Longtime Assistant Coach Jerry Sandusky was charged with 40 counts of child sex abuse, setting off a firestorm of accusations about who failed to protect the children of Happy Valley. Was Sandusky’s abuse an ‘open secret’ in the town? Did Coach Paterno and the Penn State administration value their football program more than the lives of Sandusky’s victims?

“Filmed over the course of the year after Sandusky’s arrest as key players in the scandal agreed to share their stories, Happy Valley deconstructs the story we think we know to uncover a much more complicated and tragic tale. Director Amir Bar-Lev creates a parable of guilt, redemption, and identity crisis for a small town caught in the glare of the national spotlight.”