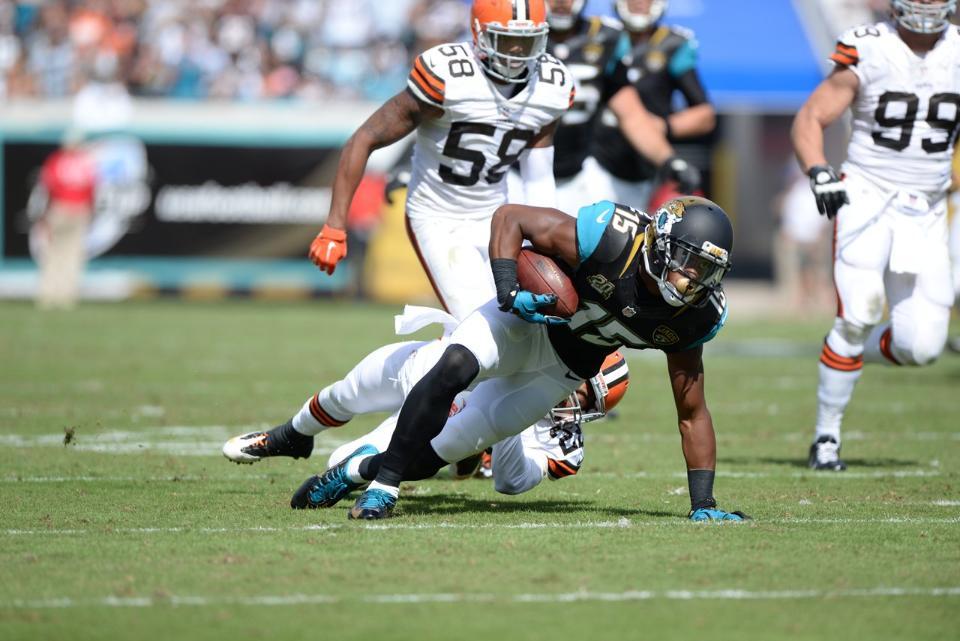 Allen Robinson came into the Jacksonville Jaguars organization with high expectations after the club drafted him 61st overall in the second round of this year’s draft. After a slow start to the season, it appears that Robinson has found his groove in Jacksonville, as he begins to establish himself as a reliable go-to target for fellow rookie quarterback Blake Bortles.

Robinson’s transition into the NFL, however, was not easy by any standards. Before the regular season even began, Robinson was sidelined due to a nagging hamstring injury suffered during Jaguars training camp. Robinson’s absence opened the door for fellow rookie wide receivers Allen Hurns and Marqise Lee to leapfrog him on the depth chart, while also allowing the two to develop a rapport with Bortles.

Robinson’s hamstring injury healed up just in time for the regular season, though his presence on the field was not immediately felt. In the Jaguars’ season opener, Robinson managed only one catch for no yardage, while Lee and Hurns stole the show offensively. It seemed like Robinson would not get his chance in the spotlight with Lee and Hurns playing so well, not to mention Cecil Shorts manning the No. 1 receiver role. However, as the season progressed, Robinson slowly began to make his presence felt.

Through the next three games, Robinson put up 16 catches for 192 yards, including a 54-yard bomb against the Washington Redskins. As his production continued to increase, so did his number of targets; during that three-game span, Robinson was targeted a total of 23 times. This indicated that Bortles, who took over for a struggling Chad Henne in week three against the Indianapolis Colts, had found a new reliable target who could act as his go-to guy. Bortles targeted Robinson 10 times in the loss to the Colts.

Robinson continued to perform, flashing moments of greatness as he continued to pile on the receptions. Week after week, Robinson has become more consistent, and has given fans a glimpse of the player we loved so dearly here at Penn State.

The highlight of his season is undoubtedly his first career touchdown, a 31-yard score against the Cleveland Browns.

Robinson sure knows how to celebrate too, breaking out the Shmoney Dance for good measure.

So far, Robinson has posted 34 catches, 371 yards, and a touchdown. Look for Robinson to take his game to the next level as he continues to develop. We may be seeing plenty more of his highlights as the NFL season rolls on.

Share via
Allen Robinson Finding His Groove In Jacksonville
https://onwardstate.com/2014/10/21/allen-robinson-finding-his-groove-in-jacksonville/
Follow @onwardstate
Send this to a friend