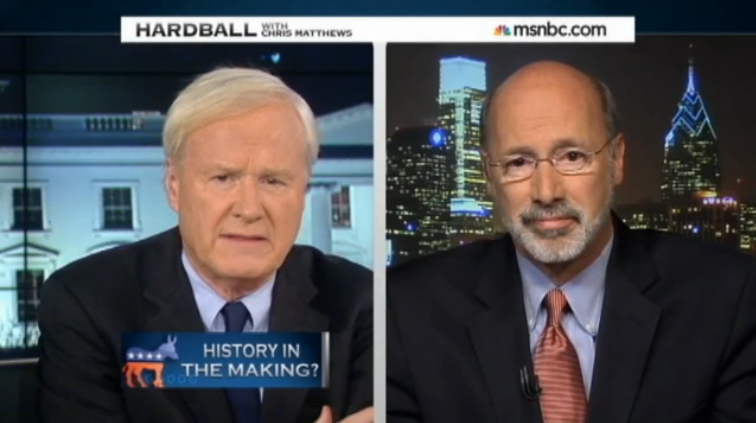 The latest bipartisan poll has Pennsylvania gubernatorial candidate Tom Wolf up 23 points on incumbent Tom Corbett only two weeks before election day. Barring some sort of meltdown, Wolf will be Pennsylvania’s next governor. With 631,000 living alumni, more than half of whom live in Pennsylvania, Penn State should be at the top of the next governor’s list of priorities.

Of course, Penn State and the Jerry Sandusky situation is as polarizing of an issue as they come, even within our own community. Candidates up 23 points are generally averse to answering questions about issues that hot, and to this point, Wolf (a Dartmouth, University of London, and MIT graduate) has strategically avoided Penn State-related questions in public.

That changed yesterday in an awkward exchange on MSNBC’s “Hardball with Chris Matthews,” although we ended up learning more about Matthews’ position than Wolf’s.

Matthews asked broadly: “Do you think people could have made that thing better than it turned out?” referring to the Sandusky incident.

Matthews never clarified who he meant by “people” and Wolf took the opportunity to punt the question. Did he mean Joe Paterno, the Board of Trustees, Penn State’s administration, the NCAA, or, maybe, everyone? That crucial followup was never asked.

“I’m going to editorialize. I think JoePa’s coming back at some point. I don’t know how long it’s going to take — you don’t have to say it, I’m saying it, I’m not running for anything. I don’t know what kind of words were passed about Sandusky’s conduct, but horsing around doesn’t tell me anything. I want to know the words — I’m tired of words that don’t tell you anything. It was a terrible thing that happened to those kids, terrible beyond belief. People should’ve used English graphic language to describe to other people. There shouldn’t have been any confusion, and I think there was.”

You can check out the video of the exchange below: