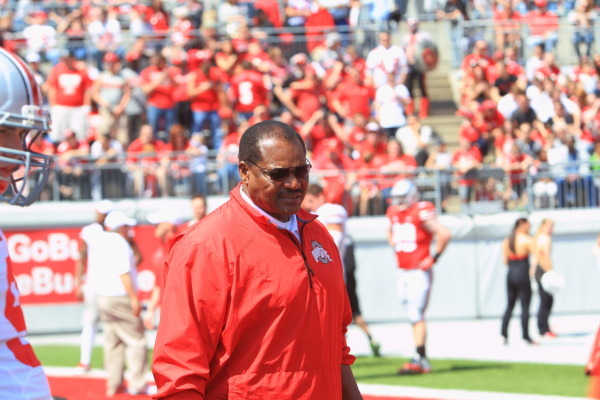 Larry Johnson’s group of superhuman defensive linemen brings a different brand of destruction to the table. Not only are all four of these players gigantic, but they are especially versatile and athletic. Let’s examine just why Penn State’s front five is in such dire straits. Bosa is one of the standout defensive ends in the country. Playing in Ohio State’s 4-3 defensive system, he wreaks havoc coming off the edge, but possesses the strength to rush inside as well. Bosa is an athletic freak, coming in at 6-foot-5, 278 pounds. Despite the size, Bosa is nimble. Only a sophomore, Bosa’s racked up numerous honors and accolades, including freshman All-American honors after he totaled 44 total tackles, 7.5 sacks, and 13.5 tackles for a loss in 2013. He hasn’t slowed down since his impressive freshman campaign, either, as he has already racked up a total of 20 tackles and 5.5 sacks in 2014.

At his weekly press conference on Tuesday, James Franklin had only praise for the sophomore. Franklin said that Bosa “is the guy that jumps out to us the most,” and mentioned that Bosa leads the Big Ten in tackles for a loss and forced fumbles.

Bosa will most likely be going up against Penn State left tackle Donovan Smith, the only member of the line with a good track record, so hopefully we can see a good battle. The next of the foursome is Ohio State defensive tackle Michael Bennett. It’s hard to tell which Bennett, a senior, is better against — the run or the pass. Against the run, Bennett is able to engage blockers and drive them back, and possesses a strong rip move that allows him to instantly disengage and swallow up ballcarriers. His 6-foot-2, 288-pound frame makes him tough to block and even tougher to game plan against.

Bennett’s rip move also works favorably when rushing the passer. Bennett is so quick off the line of scrimmage that he gives opposing linemen little time to properly engage, allowing him to easily dispose of them and hurry the quarterback. Expect Bennett to bull-rush Penn State’s offensive guards all game, and don’t be surprised if he repeatedly winds up in the backfield.

Bennett has not yet put up statistics like he did in 2013, when he amassed 44 tackles, 7.5 sacks, and 11.5 total tackles for a loss, but don’t let that deter you — Bennett’s disruptive style of play allows other teammates to capitalize and make easy tackles. Bosa is a prime example of a player who’s benefitted from Bennett’s dominant presence. When he is not the only defender in on a tackle, then he usually is assisting in some way or another, be it gang tackling a ball carrier or crushing a runner already held up by a defender.

Bennett, who has 10 tackles, one sack, and three tackles for a loss, is a nightmare. Washington uses his incredible strength and relentless motor to bull rush offensive linemen, and he has a knack for living in the opponent’s backfield. Washington is not as agile as Bennett on tape, but where he lacks agility, he compensates with brute strength and sheer disruptiveness. Thus far, Washington has posted 14 tackles, one sack, and four tackles for a loss.

What’s even more intimidating is that Washington’s injury woes from a year ago have subsided, and he is now playing at 100 percent. Washington thrives against stopping the run, and could potentially have a field day stuffing Penn State’s ball carriers in the trenches. His presence creates a mismatch nightmare for the Nittany Lion offensive line, as Coach Hand will have to decide who to double team and who to leave one-on-one.

Not to be forgotten is senior defensive end Steve Miller, who will continue to step in for the suspended Noah Spence. While the 6-foot-3, 255-pound Miller is not the game-changing force that Spence is, he can still generate pressure and get to the quarterback. Thus far, Miller has racked up 13 tackles, with two for a loss, and will most likely take on Nittany Lion offensive tackle Andrew Nelson on Saturday night.  Reviews of Miller’s play have been positive, so if he’s one-on-one’d, it could get ugly.

It is worth noting that the Buckeyes will be without one of their most dynamic pass rushers in Spence, who has been suspended indefinitely after failing a second drug test. Spence, who hails from Bishop McDevitt High School in Harrisburg, is a rare talent. The junior was honored as a first team All-Big Ten Conference selection last season after posting 52 tackles, eight sacks, and 14.5 tackles for a loss. There is no doubt that Spence has NFL potential if he can stay out of trouble, and the Nittany Lions will catch a break by not having to face him.

It oughta be a long, painful night for the Penn State offensive line and quarterback Christian Hackenberg, who is sure to receive his fair share of blows from the fearsome Ohio State front four. He will have to get rid of the ball quickly on Saturday, or suffer the consequences. Ohio State’s defensive line will be in his face all night long, and the offensive line must play its best game of the year (and then some) for the Nittany Lions to have a chance.