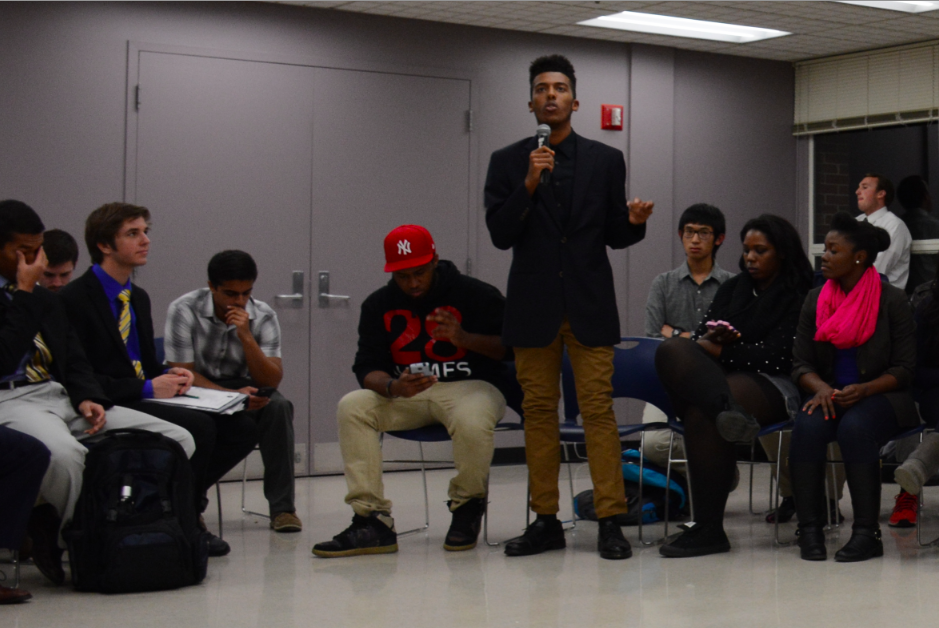 In what appears to be an annual tradition for the University Park Undergraduate Association around Halloween, the organization saw a large contingent of minority students speak out against comments made by representatives that they deemed offensive and racially insensitive at last night’s meeting. Following a tense and opinionated open student forum, the assembly later convened into a town-hall style committee of the whole meeting to hold a dialogue with the minority representatives.

To take a step back from last night’s events, the controversy took form after last week’s meeting when the assembly voted on a poster campaign against racially-driven Halloween costumes. Two representatives were called out by name as minority group representatives referenced Onward State’s recap of last week’s UPUA meeting.

Calvin Eberle, one of the representatives mentioned, was taken to task for likening fraternity and sorority members wearing togas during Greek Week to people wearing blackface on Halloween. Eberle backtracked on his comments, explaining that his message was lost in translation.

“I did vote for the posters and I’m very happy that it went through. The purpose of my statement was that we need to show the utmost respect for all cultures and races,” Eberle said.

The second representative brought up was Ted Ritsick, who was a vocal opponent of the poster campaign last week, citing the right to free speech as his main argument. While he doesn’t support racially offensive costumes, like blackface or sombreros, Ritsick argued that students have the first amendment right to wear whatever costume they want and that the student government, as a body representing a public university, has to protect those rights.

Terrell Finner, president of the Penn State National Panhellenic Council, questioned Ritsick’s argument, asking what hanging up posters has to do with violating free speech rights. Another student, Alysa Bradley, called out Ritsick by name as she called his opinion inexcusable.

“It is your job that you represent, advocate for, and protect the interests of all students,” Bradley said. “You can not advocate for the right of free speech for the dominant culture here without addressing how important the feelings of the minority students are. It is inexcusable that you could say it is someone’s right as free speech to wear blackface.”

Ritsick, however, was defensive of his argument and said that he stands by the idea that wearing blackface and other racially offensive costumes is a first amendment right.

“I respect your concerns, but the ideological reason I voted no was because it is not the student government’s job to be telling people what they should or should not do,” Ritsick said. “It was not a race thing. If you’re doing something that is protected under law, it is your right to do things that offend people. As a public university, it’s not our job to go out and tell people you shouldn’t do anything. It just is not our business.”

A handful of students could be heard asking him what UPUA’s business is if not to advocate for things like racial insensitivity.

“What is your business then,” one woman asked. “That’s crazy.”

Ritsick couldn’t help himself from piling on to his lack of sensitivity during the town hall meeting when upset students had a chance to open a dialogue with him. He first analogized the situation to supporting the right of students to drink alcohol on State Patty’s Day and “make bad decisions,” although he doesn’t support their actual actions.

He then attempted to sympathize with the minority students, saying that he understands their situation because he was a change-of-campus student at University Park, making him a minority on campus. Ritsick again emphasized the right to be racially offensive.

“There is historical context behind [wearing blackface] that is hurtful,” he said. “On that same token, though you can hurt someone with your words or actions, you still have a right to say things that offend people. This is a university where we advocate for free speech, so those rights are of the utmost importance.”

Bradley again spoke up, this time becoming noticeably emotional, screaming at Ritsick and other UPUA members for a lack of sensitivity to racial issues. Bradley’s voice began to shake and tears rolled down her face as she told the assembly how hard it is to be called names like a “ni**er bitch.”

One student after another took the microphone to address concerns on diversity to the UPUA. There were roughly 30 to 40 students on hand at the meeting to speak about racism and diversity issues at Penn State — the largest number in quite some time.

“Halloween is a scary time on campus for black students,” Finner said. “We need your organization to be sensitive about this kind of stuff and to work with us and represent the needs of the students you represent.”

Naeem Holman, a member of the Penn State Student Black Caucus, said that he hates to see this issue come to the UPUA floor on an annual basis.

“I’m getting a little frustrated coming to speak about this all the time,” Holman said. “It seems as though there’s always a group of students sitting in the back of this room at the same time every year for the same exact issue. For a university that was just named one of the most committed to diversity, as a student of color I don’t see it.”

At-Large Representative Steffen Blanco is spearheading a diversity report as a way to collect data, statistics, and testimonials on the cultural climate at Penn State. He presented the idea to the students at the meeting, who were largely receptive to the concept of forming the report and presenting it to the administration as a unified front.

UPUA President Anand Ganjam was noticeably silent on the issue during both the general assembly meeting and the town hall, waiting until the very end to voice his calculated opinion. Ganjam thanked the students for coming and mentioned his support for the diversity report, which was originally a part of his campaign platform when running for president.

In the end, the minority groups and the UPUA assembly agreed to hold further discussions going forward as a way to form some concrete initiatives in the wake of this controversy.

“It was one of the greatest learning experiences of my life,” he said.

If you’re wondering what else went on in the world of UPUA last night, the assembly confirmed a new S-Book Director, current IFC President Dan Combs, by a 29-7 vote. It also voted not to reinstate former representative Malik Cooper, who petitioned for reinstatement after being banned for repeated violations of the UPUA attendance policy. He needed a 3/4 vote to be allowed back into the assembly but failed to come through, 20-15.

In the legislative world, the assembly unanimously passed Policy 06-09, which revises its rules for legislation co-sponsorship, removing a clause that required sponsors from at least two different constituencies.