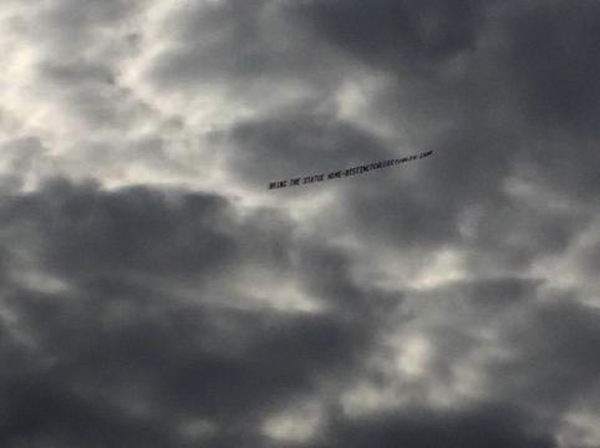 With Penn State fans tailgating in the fields and parking lots below, a plane flew above Happy Valley this afternoon with a message to the school: “Bring the statue home.”

The banner included the website for a company called Distinct Collectibles, which prominently features work by Angelo Di Maria, the Sicialian-born and Pennsylvania-raised man best known for sculpting the famous Joe Paterno statue that once sat outside Beaver Stadium.

The company sells just one product: a miniature handcrafted replication of the Paterno statue for $590. The bronze figurine is nine inches tall and weighs ten pounds. Distinct Collectibles was also spotted handing out brochures outside of the stadium. It’s interesting that Di Maria would design and sell Paterno statues and presumably sponsor a plane asking for the return of the statue considering comments he made in the wake of the Sandusky scandal two years ago.

In a Washington Times article, Di Maria was quoted as saying that the statue’s removal “had to be done” and that Paterno “made a mistake and a very big mistake.” He also said that the statue is “now nothing more than 900 pounds of dead metal” to him.

While it isn’t clear who runs Distinct Collectibles, the site says that “the founders are avid supporters of Penn State and Joe Paterno, however, they have no official relationship with either the university or the Paterno family.”

A portion of the proceeds from each sale of the mini Paterno statue will be donated to The Paterno Foundation, a charity formed in 2012 and run by the family.