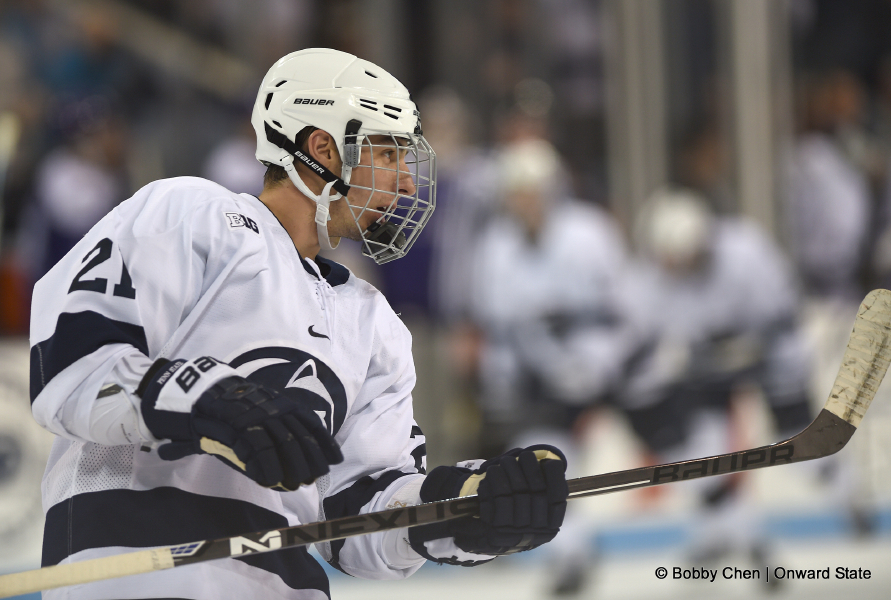 In what was arguably Penn State’s most complete game of the season, the Nittany Lions’ shot total proved to be overwhelming in a 3-1 win over Holy Cross on Friday night.

The Crusaders made an impressive showing right out of the gate, drawing penalties quickly and generating most of the early opportunities. Penn State was sent to the penalty box four times in the opening stanza, and as has become custom, Matt Skoff came up with huge shorthanded saves to keep the game scoreless.

The tie appeared to be broken with 1:09 remaining in the period, as Dylan Richard powered across the crease and slid the puck past Holy Cross goalie Matt Ginn. After a brief review, the goal call was (controversially) overturned, and Richard was instead sent to the penalty box as the period wound down.

“The call was that Dylan Richard interfered with the goaltender,” said coach Guy Gadowsky postgame. “I don’t agree with that at all.”

Richard also thought the call was debatable. “I didn’t think I interfered the goalie enough,” he recounted. “It’s a tough break, there’s nothing you can do about it.”

After the scoreless first, the second began as more of the same. Penn State appeared to hold the upper hand during play, but neither team could capitalize on their opportunities.

Penn State was called on the majority of penalties early in the game, but after Richard’s disallowed goal, the powe rplays were completely in the Nittany Lions’ favor. Penn State didn’t take any penalties after Richard’s goaltender interference call, yet Holy Cross was called eight times. The momentum began to snowball, and with 5:57 remaining in the second period, Ricky DeRosa opened the scoring with his first goal of the season.

For the third straight game, Penn State held the lead at the beginning of the third period. And for the third straight game, the lead wasn’t to last, as the Crusader’s Scott Pooley tied the game seven and a half minutes into the period. Penn State finally broke the mold, however, when Eric Scheid slid in behind the defense and buried the eventual game-winner after a scramble down low. As the game was winding down, Casey Bailey put the game out of reach on Penn State’s only power play goal, and finalized the score at 3-1.

The Nittany Lions have an off day on Saturday before taking on Holy Cross again on Sunday at noon at Pegula.