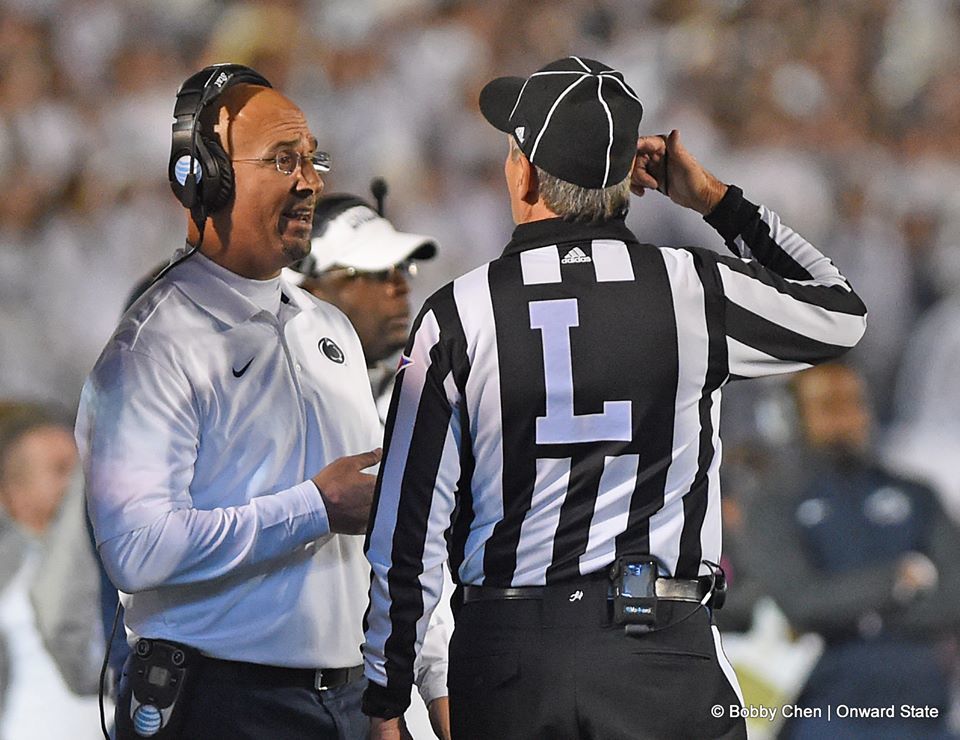 I’m not usually one to blame the referees for the outcome of a game, or whine generally about poor officiating. Those voices tend to depend on perspective and rooting interest. A blown pass interference call, a crucial holding call that could’ve gone either way, or the whole litany of other judgement penalties Big Ten Refs consistently screw up usually balance out for a team over the course of the year.

However, when the officiating is so bad that a pool reporter is allowed to interview the crew chief (John O’Neill) and replay official (Tom Fiedler) after the game, you know something is fucked up.

“I’d love to come in here and tell you what I really think,” James Franklin said on the officiating after the game. “But that wouldn’t be appropriate.”

There are two penalties in particular from last night that resulted in Ohio State scores that were indisputably and objectively incorrect calls.

First was Christian Hackenberg’s admittedly poor pass that was “picked off” by Ohio State’s Vonn Bell. You can see the ball clearly hitting the ground — this is not in question. This play was reviewed and the call inexplicably stood. That gave the Buckeyes the ball in great field position at Penn State’s 39 yard-line, which resulted in an easy touchdown (only one of two Ohio State would score on the day).

To screw up the call is one thing; to screw it up after looking at video like this is grounds for losing your job.

The second blown call was even worse. Ohio State set up — and made — a 49-yard field goal to go ahead 10-0 in the second quarter. Except, there was one problem — a full three seconds passed after the game clock hit zero before the ball was snapped. The five-yard penalty that should have ensued would have surely pushed Ohio State out of field goal range and forced a punt on 4th and 30.

I have only seen a missed playclock penalty once or twice, and it was only by less than a second each time. To allow a full three seconds extra is simply mind-boggling. The backline judge has literally one job before the ball is snapped after the teams are lined up and that’s to watch the playclock. It is the easiest job on the field. This is also why certain penalties should be reviewable.

O’Neill and Fiedler answered questions to a pool reporter after the game yesterday which was distributed to the media. The answers don’t make much sense, nor do the officials take any responsibility for screwing up calls that helped Ohio State score 10 of its 17 points.

Q: The Ohio State Interception in the first quarter, was there a problem with the two replay feeds on that?
O’Neill: The play technically was not thoroughly reviewed due to some technical difficulties with the equipment.

Q: In a case like that when the main feed and the back-up feed are not available, is there any provision that can you look at the in-house feed to get a back-up to get a look at that?
O’Neill: The feeds that the replay team looks at are the feeds you get at home. We can’t create our own rules. The replay rules are clear that we have to use the equipment provided. So, Tom (Fiedler) and the team reviewed what they had.

Q: Then there’s no provision to look at the in-house feed then?
O’Neill: Right.

Q: Is that something that if you see it in the booth that you can buzz down or is that not a situation that is reviewable
Fiedler: That is not reviewable in terms of when the ball is snapped in relationship to the zeros on the clock.

Would these calls have affected the outcome of the game? Figuring that out is always the most frustrating part. The fact that Penn State fought valiantly and took the 13th best team in the country into overtime when nobody said they could is reason for optimism, and we should all be proud of this team. But thinking about what could have been — and what a win like this would have meant to the program — well, I should just stop watching that GIF over and over again.

UPDATE: As astute reader Jason points out, O’Neill’s explanation: “The feeds that the replay team looks at are the feeds you get at home. We can’t create our own rules. The replay rules are clear that we have to use the equipment provided. So, Tom (Fiedler) and the team reviewed what they had,” is just plain wrong. The crew could have used the in-house feed, which also showed a clear incompletion, to make the call. Kevin Horne was the editor of Onward State from 2012-2014 and currently holds the position of Managing Editor Emeritus, which is a fake title he made up. He graduated from Penn State with degrees journalism and political science in 2014 and is currently seeking his J.D. at the Penn State Dickinson School of Law. A third generation Penn Stater from Williamsport, Pa., Kevin is also the president of the graduate student government. Email: kevin@onwardstate.com