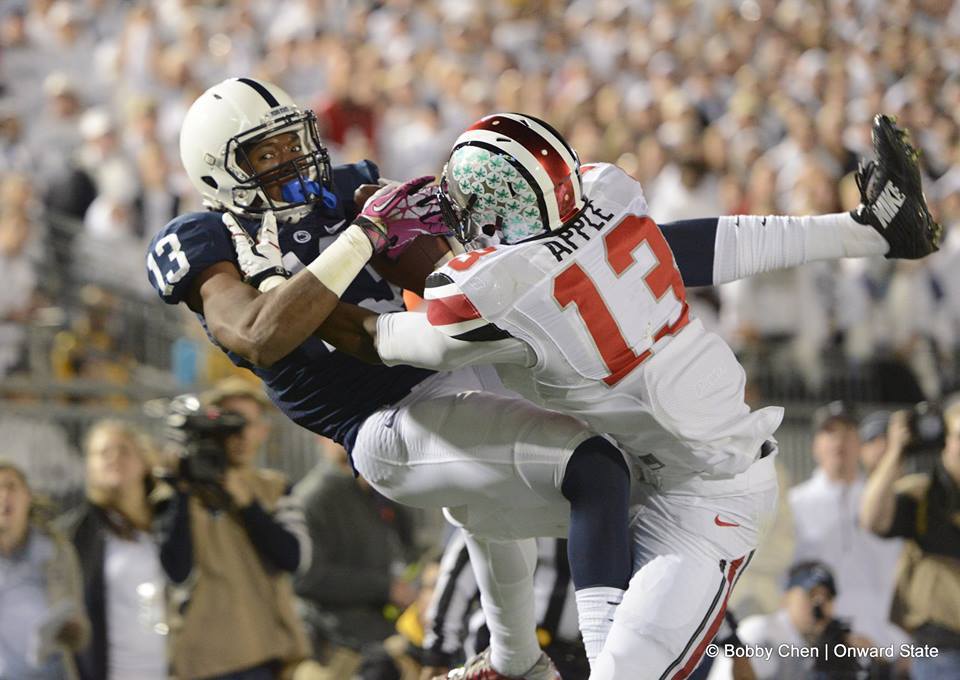 Penn State (4-3) fell to No. 13 Ohio State (6-1) Saturday night at Beaver Stadium, 31-24 in double overtime. The Nittany Lions trailed 17-0 at the half, but mounted a roaring comeback to force overtime.

It seemed destined to be an ugly night from the start, but a cringe-worthy first half paved way for a historic finale.

On the opening kickoff, Zach Zwinak injured his leg and had to be carted off the field. It could be the end of the senior’s career if the injury is serious. Four plays later, Christian Hackenberg targeted DaeSean Hamilton. The pass was ruled an interception, but replays suggested the referees would certainly reverse the call. They didn’t, to the shock of James Franklin and the Whiteout crowd.

Here’s a shot of the Ohio State interception. This ball definitely didn’t hit the ground, right? (via @JamesFrankwin) pic.twitter.com/8pbjfBQuPt

Ohio State took over at Penn State’s 39, and three minutes later the Buckeyes were in the Nittany Lions’ end zone, on behalf of a 10-yard Ezekial Elliott run. The two teams traded punts on the following three possessions. Punter Chris Gulla started for the Nittany Lions, but after numerous poor boots, he was sidelined by Daniel Pasquariello, a true freshman from Australia.

Ohio State, led by freshman quarterback J.T. Barrett, outgained Penn State on the ground 84-16 yards in the first quarter. With Zwinack out and a struggling offensive line confused by a dominant Buckeyes’ defense, Bill Belton and Akeel Lynch had few openings, and even less confidence. Ohio State began the second quarter with a drive that started from its nine-yard line and ended with a 49-yard field goal to push the Buckeyes ahead, 10-0. It was the second score that came with controversy: the play clock had expired before Ohio State snapped the ball, not just by a split second, but by a good two or three.

Again, Penn State could muster no offense. Hackenberg finished the first half with 67 yards, 50 of which went to Hamilton. The Lions tallied just 12 total yards in the second quarter.

With 3:58 to go in the half, Ohio State capped a 39-yard drive with a one-yard touchdown pass. It put the Buckeyes comfortably ahead, 17-0. After another failed Penn State drive, the first half mercifully came to an end.

Ohio State received the ball to start the second half. On third and six from his 37, Barrett’s pass was intercepted by lineman Anthony Zettel. The big man showed surprising speed, returning it 40 yards for the score.

The crowd erupted. It was a game again, with Penn State trailing, 17-7. It was also the first pick-six for Penn State since NaVarro Bowman’s against Indiana, all the way back in 2009.

Three drives later, a lengthy Ohio State drive stalled when Nuerberger pushed a 41-yard field goal wide right. But Penn State couldn’t take advantage of the error. On second and eight from the Buckeyes’ 44, Hackenberg threw an interception on the run, his second of the game.

Yet Mike Hull intercepted a Barrett pass on the next play. Hackenberg, this time more confidently, led another march down the field. And on a third and six from Ohio State’s 24, the sophomore quarterback connected with true freshman Saeed Blacknall for an incredible corner of the end zone catch that brought Penn State just three points short of the Buckeyes.

Eight minutes later, with just under three minutes to play, it was Penn State again with the ball, this time at its own nine yard line. Down three, and without left tackle Donovan Smith, Hackenberg led a 19-play drive — Penn State’s longest since 2009 — that will go down in the annals of Penn State football lore.

The Nittany Lions traveled 71 yards. A third and goal bullet to Chris Godwin fell incomplete. But Sam Ficken, who is now 13-15 on the year, drilled a 31-yard field goal to tie the game and force overtime.

Godwin and Blacknall, both true freshmen, combined for five receptions on the final drive.

Penn State opened overtime with the ball. A 12-yard completion to Hamilton set up a one-yard Belton touchdown plunge. Suddenly, the Nittany Lions had its first lead of the night, 24-17.

But it was Ohio State who had the last laugh. Barrett rushed twice, first for 17 yards, then a five-yard touchdown scamper to tie the game again. A Penn State penalty on the extra point put the Buckeyes half the distance to the goal on their next possession. With ease, Barrett rushed twice more en route to the end zone. Ohio State once again led, 31-24.

Hackenberg could not muster one final heroic scoring drive. On fourth and five, stud defensive lineman Joey Bosa bull-rushed Akeel Lynch. Lynch, a running back, had no chance, and was pushed into Hackenberg, forcing him to the ground.

“We’re that close,” said James Franklin is his post-game press conference. Franklin seemed to be fighting back tears before addressing the media. He needed to gather himself at the podium before continuing.

“I love these kids,” he said. “I told them that… There are no moral victories at Penn State. There never will be. But I’m proud of how the team fought tonight.”

Hackenberg finished 31-49 for 224 yards, one touchdown and two interceptions. He’s thrown at least one interception in every game except for UMass. Lynch rushed for 38 yards, and Belton only gathered eight. Ohio State only outgained Penn State 293-240 in regards to total yards, but out-rushed the Lions 219-16.

Players of the game:

The contributions of two players carried Penn State throughout the contest.

Linebacker Mike Hull had 19 tackles for Penn State, a career-high. Hull’s interception recaptured the momentum after Hackenberg tossed the ball, and seemingly the game, away.

“I think he should be on every award list right now,” said Franklin.

“He’s very disciplined in his capabilities,” said Franklin of Hamilton. “I’m very pleased with his progress.”

There were numerous calls that left Franklin and the 107,895 fans bemused throughout the game. In his post-game press conference, Franklin seemed disappointed with the officiating, but refused to formally comment.

The first year coach explained that he’s an emotional guy, but the risk of a fine and other factors would keep his true emotions mute.

“I’m not allowed to talk about those things,” he said.

If you feel like getting angry, check out this transcript of the officiating crew’s post-game interview.

Here’s a transcript of the officiating crew’s post-game interview. Pretty mind-blowingly incompetent, if you ask us. pic.twitter.com/kkhbQG3zQ9

Penn State has dropped three in a row for the first time since 2004, but will look to reverse that trend next Saturday, when the team hosts Maryland (5-3) at noon.

Share via
Penn State Loses an Overtime Classic to Ohio State, 31-24
https://onwardstate.com/2014/10/26/penn-state-loses-an-overtime-classic-to-ohio-state-31-24/
Follow @onwardstate
Send this to a friend