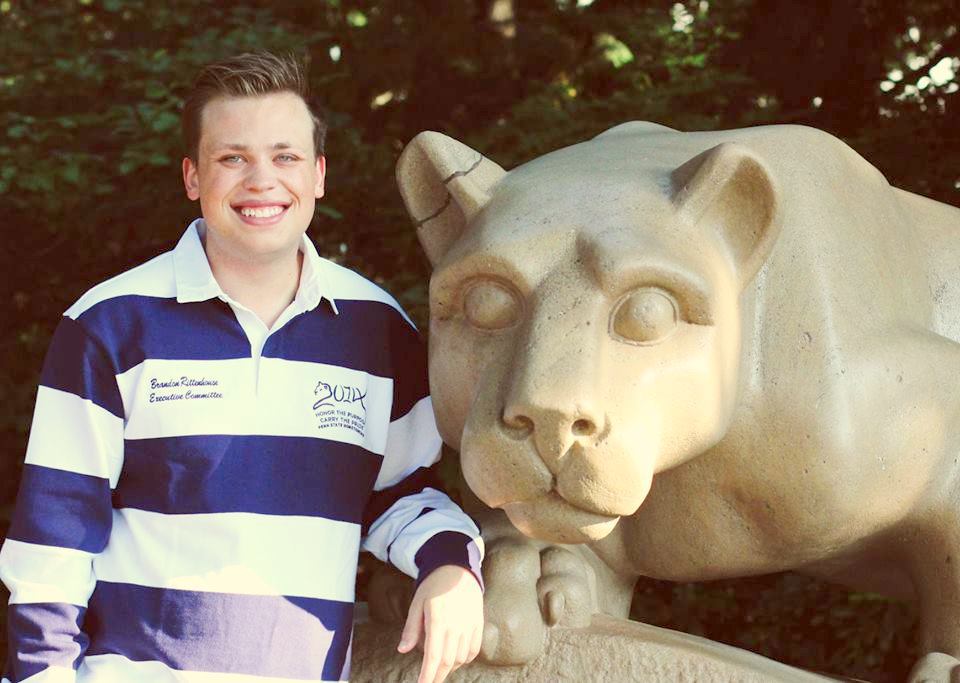 On Monday, the former Homecoming Merchandise Director, Brandon Rittenhouse, was named Homecoming Executive Director for the upcoming year. Rittenhouse, who also operates as a freelance photographer, was incredibly cooperative and politely answered a few questions for us.

Onward State: As the newest Homecoming Executive Director, what do you think you can improve from previous years?

Brandon Rittenhouse: Homecoming 2014 was an incredibly successful week and I am completely amazed by everything that we accomplished this year. It was such an awesome opportunity to see students, alumni, faculty, and staff come together to celebrate Penn State for an entire week. One thing that I’d like to see change this year would be increased involvement from student groups who are normally not involved in Penn State Homecoming. My goal for Homecoming this year is to continue to grow our existing events, while adding new and exciting ways for members of the Penn State family to get involved with Homecoming.

OS: Any tips for someone looking to get involved in Homecoming?

BR: Broaden your horizons; there are so many ways to become involved with Homecoming. I would sit down and look at all of the opportunities we provide and from there choose what works for you. It is such an incredible way to get involved and help to make a tangible impact on our university and community.

OS: Why did you first get involved in Homecoming?

BR: As a first-year student, I struggled to find something to become involved in that fit who I am as a person. Since I grew up in State College, Homecoming was always something that I loved and when I found out I had the opportunity to get involved with it, it was a no-brainer. When I received a Photography Captain position for Homecoming 2013, I was completely shocked and amazed that the organization trusted me enough to document the entire year. It was such an incredible experience and I grew so passionate for the organization that continuing with it and applying to be a member of the Homecoming Executive Committee was a logical next step.

BR: It is hard to pinpoint a favorite part of Homecoming week because it is so diverse and every event offers something different. However, the day that stands out to me the most is the Friday of Homecoming week, which features the Student-Alumni Ice Cream Social and the Homecoming Parade. The Ice Cream Social is a really cool event because there is always a large turnout of alumni from all over interacting with current students while they enjoy something we all love — Creamery ice cream. Shortly after that event, the Homecoming Parade starts. I absolutely love watching all of the floats and seeing how much the community loves the parade. Oh, and the walking groups that hand out candy are a plus.

OS: How do you think your previous role, Merchandise Director, will contribute to your new one?

OS: Are you involved in anything else outside of Penn State?

BR: The major thing that I’m involved in outside of Penn State is freelance photography. I absolutely love taking photos for people like high school and college seniors. It is a fantastic way for me to meet people while doing something that I love.

OS: How long have you been doing photography, and where does that passion stem from?

BR: I first fell in love with photography as a sophomore in high school. As a child, I was always a very visual learner and I loved looking at magazines and photo books. Since my senior year of high school, I’ve been taking senior portraits and that has only increased my passion for the art. In the future, I’d like to continue with photography and eventually become the next Tim Walker.

OS: What’s your favorite memory from your tenure at Penn State?

BR: My favorite memory thus far is most definitely the 2013 Homecoming football game. That game was unbelievable. The student section was the most electric I have ever seen it and the feeling in that stadium was a once-in-a-lifetime kind of feeling.

OS: If you could take any Penn Stater — past or present — out to lunch, who would it be and why?

BR: One of my favorite photographers of all time is Steve McCurry. He has been such an influence on my photography since I can even remember. I would love to sit down with him and talk about his experiences as arguably one of the world’s most recognized photojournalists.

OS: If you were a dinosaur, which would you be and why?

BR: Considering my favorite Power Ranger since 1994 has always been the pink one, I would have to say I would be a Pterodactyl. Who wouldn’t want to be able to fly?