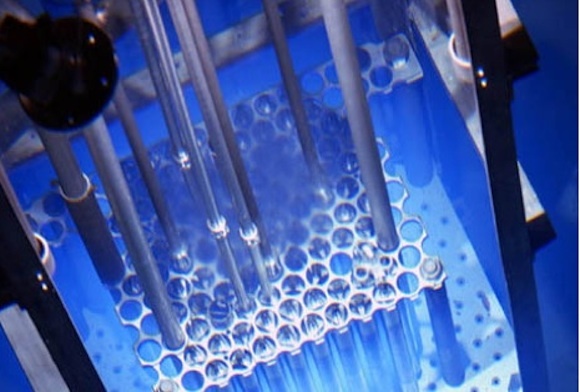 Fine, that last one isn’t quite as well known as the others, but our own Nuclear Historic Landmark probably deserves some more attention. In 1955, President Dwight Eisenhower created the Atoms for Peace program. The program was designed to supply equipment and information about nuclear power to research institutions, hospitals, and schools throughout the world. During this time, the president of the university happened to be Milton Eisenhower, brother to Dwight. The close relationship the school had with the president is cited as one of the many reasons Penn State was chosen as the home to a nuclear reactor.

Penn State received its reactor after the Board of Trustees authorized the construction in 1953. Upon completion of the reactor, it named it the Breazeale Reactor, after the university’s first professor of nuclear engineering, William Breazeale. The reactor quickly became a tool for training and research with the end goal of finding peaceful applications for the energy atoms can create. The Breazeale Reactor was licensed in July of 1955, making it almost 60 years old. Since that day, the reactor has neither been replaced nor stopped. Penn State has used the reactor for research in varying colleges from nuclear engineering to geoscience. The reactor stands as a base to give students an understanding of how reactors work and supplies a source of neurons for research projects. The reactor does not power or provide electricity for the campus — it’s purely used for research and educating students.

People always wonder about the security of such a dangerous object. In 2005, ABC News took 10 students who were working for the news team and had them visit nuclear reactors on 25 college campuses. From there, they looked for security holes in the reactor facility. When they visited Penn State, ABC found some troubling security holes. At the time, there were no armed guards, metal detectors, background checks, or searches. The building’s only sources of protection were student ID requirement for access and a seven-foot high fence with a guard. However, ABC’s observation, the guard was found to be sleeping on duty. I’m told that most of those problems have been mitigated — indeed, the nuclear reactor is probably the most secure area on campus.

Due to the interest and educational value of the reactor, Penn State even offers tours of the facility. In 2009, an Onward State reporter went on a tour of the building and documented his findings. You can schedule your own tour here.

While you’re waiting for your tour, you can check out the reactor in action:

For more questions on the reactor and how to use it, you can visit the FAQ page of the Radiation Science and Engineering Center.