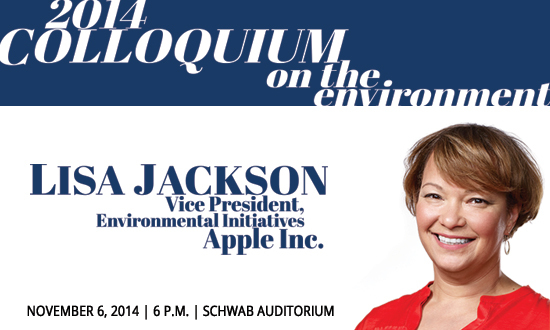 Lisa Jackson, the Vice President of Environmental Initiatives at Apple Inc. and former head of the U.S. Environmental Protection Agency, will be the keynote speaker for the 2014 Colloquium on the Environment on Thursday, Nov. 6 at 6 p.m. in Schwab Auditorium.

Started in 2004, the colloquium is a joint project sponsored by Penn State Institutes of Energy and the Environment (PSIEE), the Office of Physical Plant (OPP), and the Sustainability Institute. The speaker series features presentations about Penn State’s environmental initiatives, followed by a renowned speaker discussing a current topic related to energy or the environment. The Colloquium has brought many influential keynote speakers to Penn State in the past, including Bobby Kennedy Jr.

Jackson will present “The Private Sector as Public Servant: Lisa Jackson’s journey from the EPA to Apple, and how one of the world’s most innovative companies is tackling critical environmental challenges” as part of the 10th annual event.

Jackson has an impressive career and is a big player in national environmental discussions. She has served as the Chief of Staff and Commissioner of the New Jersey Department of Environment Protection. In 2009, she became the first African American and the fourth woman to serve as EPA Administrator. After four years of running the EPA, she joined Apple to work on the company’s environmental responsibility.

At Apple, Jackson works to reduce the company’s impact on the environment through use of greener materials and conservation of precious resources. The company has made great strides in minimizing its environmental impact, according to its own metrics. An impressive 145 of its 263 U.S. retail stores are now powered with 100% renewable energy, and contemporary iMacs use 97% less electricity than the first iMac.

The event is free and open to the public. Entrepreneurs, environmentalists, and Apple admirers should be sure to stop by.

Share via
Lisa Jackson, VP of Apple\'s Environmental Initiatives, as Keynote Speaker
https://onwardstate.com/2014/10/31/apple-vp-lisa-jackson-to-headline-environmental-colloquium/
Follow @onwardstate
Send this to a friend