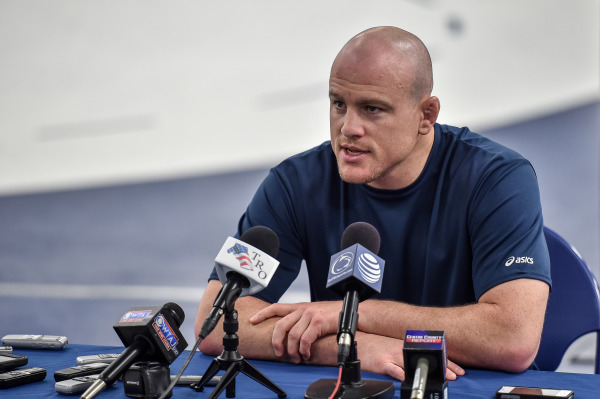 The No. 5 Penn State wrestling team starts its quest for its fifth straight NCAA championship this Sunday against No. 17 Lehigh in Rec Hall, but it will be without two familiar faces — and we aren’t talking about Ed Ruth and David Taylor.

At the team’s media day yesterday in Rec Hall, coach Cael Sanderson announced that the team would be redshirting senior Nico Megaludis and sophomore Zain Retherford. Last season, Megaludis finished an impressive third place at the NCAA Championships, while Retherford finished fifth. Both were All-Americans.

When asked about the decision, Sanderson said, “That’s the plan right now. That can change, obviously, as the season goes along, but [right now], we want to see where we’re at.

“I think Nico deserves a year. He stepped in right away as a true freshman. Same thing with Zain, they’re two guys that stepped in and helped us win national championships. We just thought it would be in their best interests to give them a chance to slow down a little bit and get a little bit bigger, work on technique, and just prepare for the future.”

While most sports usually use a student-athlete’s redshirt year when the athlete is a freshman, it isn’t out of the ordinary for a wrestler to be redshirted later in his collegiate career. Because there are only 10 weight classes, and only 10 athletes compete during every match, it’s different than football where players substitute in and out of the games. Since so few athletes are used every match, coaches sometimes strategically use a redshirt to increase the team’s chances at a title during a different year.

Megaludis said that he and the coaches came to the decision together, but the idea was originally his.

“It was my decision…I talked to the coaches, and it wasn’t like we had a meeting about it, but it just kind of came up and happened. I’m ready to go if [the team] needs me, though. I can always take it off in the middle of the season. If something happens, I’ll be there.”

Sanderson is in the unique position of having two wrestlers who are able to compete at Megaludis’ weight, 125 pounds. Redshirt junior Jordan Conaway will take over at 125 pounds this season after wrestling in a higher weight class (133 pounds) in his first two seasons. Conaway is 34-15 in his career, with seven victories over ranked opponents.

Both Sanderson and Megaludis had nothing but praise for Conaway, who is ranked No. 12 in the country at his weight. “With Jordan Conaway, we feel very comfortable with him at 125, and we missed him in our lineup last year [at that weight],” said Sanderson.

“People are going to be really surprised with what he does,” Megaludis said. “I don’t think people realize how hard of a worker he is. The kid’s got a motor on him, and he’s dedicated. He’s going to beat some good kids, he’s definitely going to shock some people.”

The team may not have two of its All-Americans in the lineup, but don’t think expectations will be any different in Happy Valley.

“I don’t think [fans should lower expectations],” said Sanderson. “I feel confident that our program’s overall foundation is the strongest that it’s ever been. The base is getting wider and stronger. That’s our job as a coaching staff, and I feel confident that’s something we’re seeing.”