With Sexual Assault Reports Rising, It’s Time To Get Educated 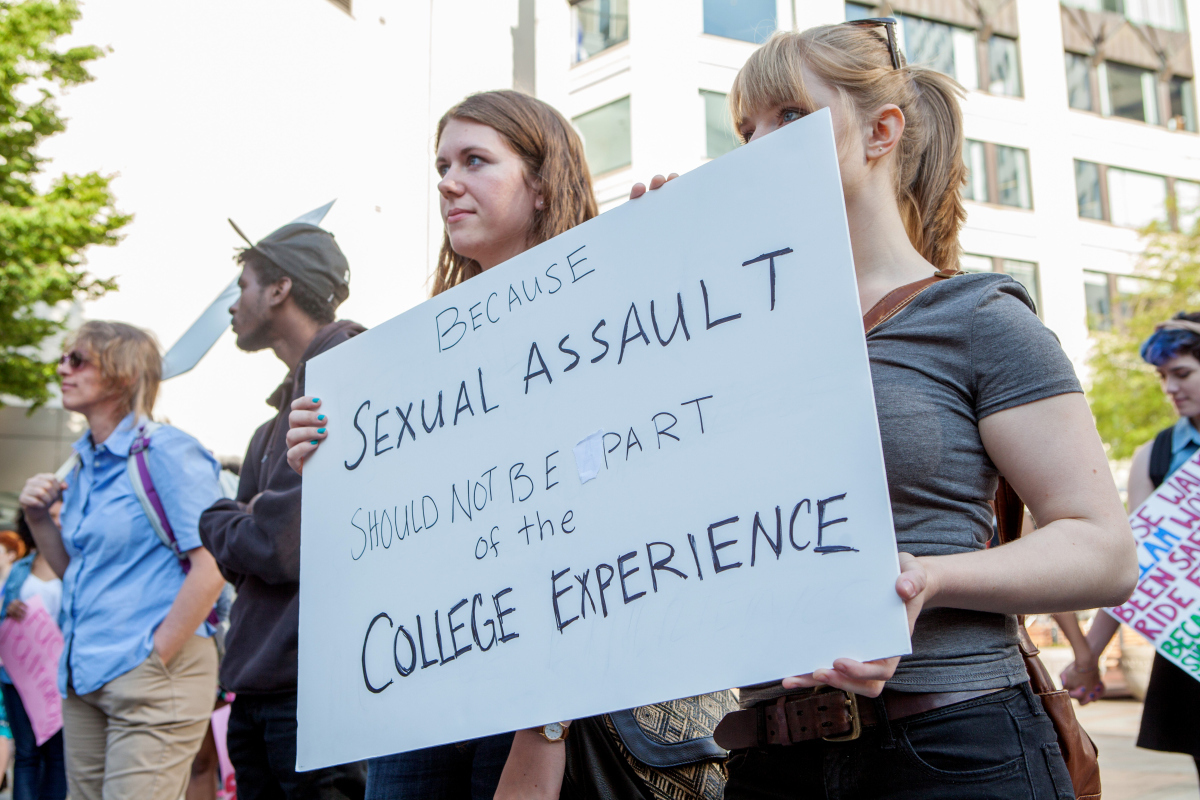 You may have noticed the “It’s On Us“ video playing on the Beaver Stadium scoreboards at football games this season, reinforcing Penn State’s involvement with the campaign as part of the Big Ten’s initiative to stop sexual violence. You may have also noticed a spike in the number of PSUAlerts and timely warnings you have received via text and email from our administration.

Whether you’ve noticed or not, since the fall semester began on August 25, a dozen instances of sexual assault have been reported at Penn State, according to Chief of Penn State Police Tyrone Parham. The university has responded to 12 separate reports of sexual violence in a little more than two months, which, according to Penn State’s Annual Safety Report, is just five less than the 17 total reports the university responded to throughout the entirety of the 2013-14 school year. In fact, according to The Daily Collegian, 18 total assaults have occurred in State College in the past two months, surpassing the total number of assaults that occurred last year altogether.

According to Parham, at this time last year, only three sexual assaults had been reported — just one fourth of the number of assaults that have been reported so far this year.

He’s right. An estimated 60 percent of sexual assaults go unreported, according to the Justice Department’s National Crime Victimization Survey. Using that logic, an estimated 30 people have actually been sexually assaulted since the beginning of the fall semester, which comes to almost one assault every other day.

Parham tried to shed some light on the alarming trends in sexual violence on campus, as well as what the university is doing about the issue.

“The thing that is consistent, here at Penn State and across the country, is that many sexual assaults occur between students who know each other. The circumstances usually involve alcohol use,” said Parham. “Here at Penn State, patterns include predominantly male suspects and female victims. The location is usually inside of his room or her room after they have invited the person inside and they are alone.”

Finally removing itself from the you’re-going-to-get-raped-by-a-guy-hiding-in-the-bushes-if-you-walk-home-alone stigma (to which few cases of sexual assault adhere), the university provides the following suggestions for the much more common known-to-the-victim cases, according to Parham:

“Penn State continues to educate students about sexual assaults, to stress that almost all sexual assaults occur with an acquaintance as the assailant, with alcohol being used, and where someone resides. We also continue to stress the importance of students looking out for each other and being active bystanders. If we all pay attention to these things and do what we are able to as bystanders, we are doing the most important things we can to reduce sexual assaults,” said Peggy Lorah, Director of the Center for Women Students.

“Consistently educating our community on the critical importance of consent also is a major part of our efforts,” said Parham. “Silence is not consent, and someone who is intoxicated may not be able to give consent. ‘No’ means no, and ‘I’m not sure’ means no.”

But how, and to whom, is the university actually stressing the importance of bystander intervention that Lorah mentioned, or the importance of affirmative consent that Parham mentioned? Through what medium is this information being provided for the student body, faculty, administration, and the rest of the Penn State community? Certainly not through any mandatory educational courses or any other method of communication that students can’t automatically delete and ignore.

When asked what more should be done to stop sexual assault at Penn State, State College Police Chief Tom King said, “For the most part, much greater education to both young men and women about proper sexual relations and what is and is not consent.”

Educating the Penn State community about what constitutes sexual assault and how we can stop it is one of the most important components of the solution to this crucial issue, and it is a component that the university has not yet mastered.

The online sexual assault program Penn State AWARE is still mandatory for freshmen, but if you’re anything like the majority of first-year students, you clicked through the short quiz quickly sometime between your chemistry and math placement exams, and you never actually absorbed any information about sexual violence. No grades were given. No essays were written. No discussions were had. This sort of program is hardly educational. Students simply check Penn State AWARE off of their pre-freshman year to-do lists, much like their meningitis shots.

If the scary statistics we all hear about sexual assault are ever going to decrease, then we need to do more.

To its credit, the university has put forth more effort this year than in years past. Under President Barron’s lead, a task force to look at the issue of sexual violence on campus was named in July. The task force is expected to provide recommendations on investigating, mitigating and adjudicating sexual assault. UPUA has also taken a step forward with its Sexual Assault Prevention Roundtable. The two organizations are working to find successful methods for the university to utilize in battling sexual violence on campus.

The Centre County Women’s Resource Center, the Center for Women Students, CAPS, police, and University Health Services are all great resources for survivors. But where are our resources to decrease the number of survivors? Where is our mandatory, three-credit educational course instructing students on what constitutes consent, on bystander intervention, or on anything else that could give them the tools to help stop sexual assault?

It could be so simple. A required course that goes through the basics: what is consent, what is bystander intervention, and what are the resources available to survivors, with big exams on each topic. If the course is discussion-based, even better. But either way, students will learn the information to pass the course, and in studying for exams, they may finally understand the topic and join our efforts toward stopping the issue altogether.

“I think sexual assault is a cultural problem and everyone will need to work together to improve awareness and support for this issue,” said Moerschbacher. “Police alone will not be able to stop the problem.”

That much is clear. While the police respond to every report that they can in the best manner possible, this problem does not require a reactive solution, but rather, a proactive solution.

“We will continue to provide the most comprehensive and compassionate support possible for survivors of sexual assault; educate our community members about what constitutes sexual assault and sexual violence, and let them know how they can report these crimes; and hold accountable those who have committed a sexual assault,” said Parham.

Let’s hope that’s true. For the sake of the 12 survivors that reported instances of sexual assault already this semester, let’s hope that Penn State can follow through with each prong of that statement, particularly that it enforces some method of educating community members about what constitutes sexual assault and sexual violence. And if it’s not, let’s work together to find a solution. Because it’s true: It’s on us to stop sexual assault. It’s not on survivors to shoulder the brunt of finding a solution to this devastating cultural issue that has already taken so much from them. We need preventative solutions, like education, and we need them soon.

Share via
A Dozen Sexual Assaults Reported So Far This Semester
https://onwardstate.com/2014/11/10/with-sexual-assault-reports-rising-its-time-to-get-educated/
Follow @onwardstate
Send this to a friend