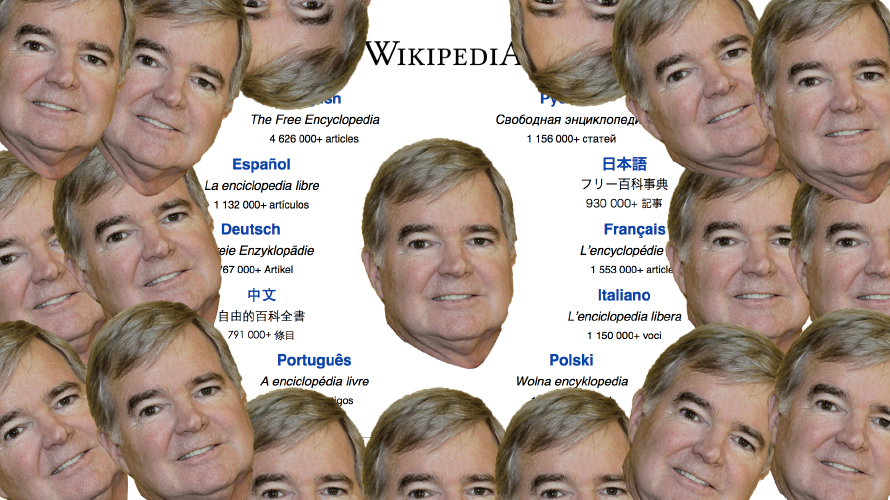 Among the transgressions displayed by the NCAA in its latest batch of emails was a knee-slapper: Mark Emmert found in December 2012 that his Wikipedia page “grossly” missed the mark in describing his Penn State decision, and he had his staff dedicate time to rectifying that atrocity. Well, after his emails about his image became public, the Internet did what the Internet should have done: It fucked with Emmert’s Wikipedia page! Before yesterday, Emmert’s page hadn’t been touched since Oct. 15. While some of the edits are super NSFW, such as making his avatar on the page a picture of something called “dickbutt”..

Only a matter of time before Wikipedia blocks editing of the Mark Emmert page. pic.twitter.com/Bz0wGYclWG — Kevin Horne (@KevinHornePSU) November 11, 2014

…others are more concerned with updating the facts. The good stuff starts in the section describing Emmert’s tenure as Chancellor at the University of Connecticut:

Yikes! No PR spin there! Moving along to Emmert’s next stop as Chancellor of LSU, we see another edit for accuracy:

And, yes, Emmert really did say that! It would be funny if it weren’t so not funny at all. But the section about Emmert’s own presidency contains the best edits. In the emails uncovered yesterday, Emmert had his PR team construct this bit, which is still on his page: “The NCAA Division I Board of Directors and NCAA Executive Committee directed Emmert to examine the circumstances and determine appropriate action in consultation with these presidential bodies. Ed Ray, Executive Committee chair and Oregon State president, said that while there has been much speculation on whether the NCAA had the authority to impose any type of penalty related to Penn State, the Executive Committee concluded the egregious behavior not only goes against NCAA rules and constitution but also against the NCAA’s values.”

But his PR team certainly did not come up with the next sentence, which is my favorite of the changes:

And in the very next paragraph, the gloves are dropped by the editor(s), and Rodney Erickson and the Board of Trustees enter the crosshairs as well. Whoever wrote the first sentence is especially crafty, because it is the exact sentence Emmert had his PR team remove when he discovered his page in 2012. All of these screenshots were still on the page Tuesday afternoon. Good job, Internet! If you want to join in on the fun, sign up with Wikipedia and follow these instructions. Let’s see how quickly Emmert’s PR team gets to his page this time.