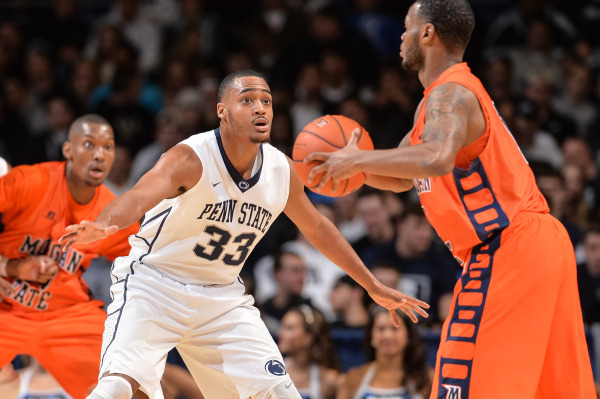 The men’s basketball team started its season off on a positive note, defeating Morgan State 61-48 in front of over 7,000 fans at the Bryce Jordan Center. Freshman Shep Garner earned his first start, and scored 14 points in his Nittany Lion debut.

“The kid earned the right to start,” coach Pat Chambers. “He gets it done on both ends of the floor. It shows as a team, a staff, and a program our confidence in him to be able to make plays. I’m proud of the way he competed; we obviously needed his production tonight. The future’s bright for him.”

Penn State clearly felt some early-season jitters in the first half, as the team shot just 2-of-8 to start, allowing the visitors jumped out to an early 16-8 lead. Garner then made his first basket as a Nittany Lion, starting a nice 12-2 streak that saw Penn State grab the lead. The Nittany Lions were able to hold onto the lead for the rest of the half, and went into the intermission with a 31-25 lead.

The half was an ugly one: Penn State committed eleven turnovers and was 1-of-7 from behind the arc. Luckily, Morgan State was worse (if that’s possible). The Bears shot just 27.8% from the field and 1-of-11 from three-point land.

“I felt like we were super excited [in the first half],” said DJ Newbill. “We had some careless turnovers. We were excited to be out there and play another team. It is something we have to work on. Just making crisp passes and little things like that.”

The second half was a much better one for the Nittany Lions. Garner made a 3-pointer on the first possession, and the team forced a shot-clock violation on the ensuing defensive possession to set the tone for the rest of the game.

The star of the night, Garner gave a glimpse of his potential late in the half. He made a beautiful pass to John Johnson for a wide open three, and then stole the ensuing inbounds pass. He went 6-of-9 from the field, and shot 40% from behind the arc.

“I thought [Garner] played great,” said Newbill. “He played with confidence. I told him he earned the right to start the game and to take advantage of the opportunity. He listened and worked hard every day. He is a big contributor to our team right now.”

The frontcourt struggled with Morgan State’s size on the offensive end, but Jordan Dickerson, Brandon Taylor, Donovon Jack, and Ross Travis picked it up on the defensive end, combining for 20 rebounds. On the offensive end, Garner, Newbill, and John Johnson picked up the slack, as the three combined for 42 points and six assists.

“The [frontcourt is] not selfish,” said Chambers. “There were a few times they could have gone and made their go to or counter move, but they kicked it out for open shots for their teammates. Maybe their shooting percentage wasn’t great and maybe they had a few turnovers like everyone else, but I thought they were very productive.”

The team takes on Fordham on Sunday at 5 p.m.