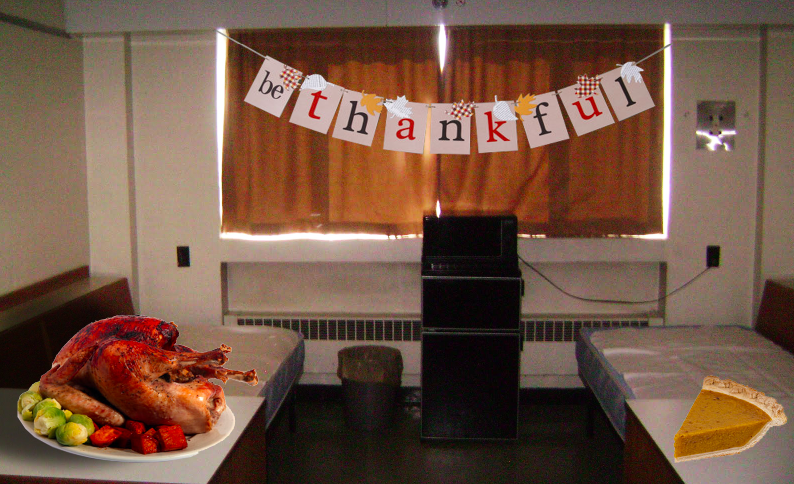 So you’re sitting there in your dorm room, debating the meaning of life and wondering what you can do to piss off your RA again when it hits you: Thanksgiving is coming. The best holiday in America — a day in which we collectively stuff our fat faces with food and alcohol — is just more than a week away. The cravings begin to set in and your mouth waters as you think of your mom’s famous roasted turkey and some savory sausage stuffing and a decadent slice of pumpkin pie. And now you’re desperately hungry for a good turkey dinner. The thought slowly creeps into your mind and you’re suddenly crazy enough to try cooking said dinner in a dormitory microwave. Well, slow down there partner, because you have absolutely no idea what you’re doing. It’s totally possible to pull off such a feat, but not without some preparation and strategic vision.

So first you need to prepare the turkey. And luckily for you, it’s already prepared since you’re going to buy it from your deli of choice. You can go to Wegman’s or McLanahan’s or wherever else, but don’t get this stuff in the little plastic container. Go to the deli counter and order it sliced thick so that your final product at least has some resemblance of a Thanksgiving dinner. Next up is the powdered turkey gravy mix. I don’t care what brand you buy, but at least get the stuff that actually has turkey in it. There should be microwave instructions on the package that basically say: 1. Add water. 2. Microwave.

And now you want mashed potatoes, but you don’t want to buy some of the dehydrated powdered potatoes. You’re already using one powdered food item in this meal, and as the rules of cooking dictate, one is the maximum. So you grab some russet potatoes. Remember what I just said. Not red or white or purple or fingerling potatoes. I said russet potatoes. They are fluffy and have a tasty skin and decent sugar content for some sweetness and since we’re using a microwave here, we need a potato that does half the work for us. Slice them up into even pieces (size isn’t important, but consistency is, so that they cook evenly), toss them in a bowl, and nuke ‘em. It should take about eight minutes. If they’re nice and fork-tender, go ahead and toss in a little milk, as much butter as your heart desires, and some salt and pepper. You can buy a potato masher or you can mash them with a fork and hate yourself when it takes half an hour. If they aren’t fluffy enough, go for another minute in the microwave.

But mashed potatoes can’t be your only side, right? Right. We’re making sausage stuffing, too. And again, don’t buy the boxed stuff. All you need is some cubed stale bread, minced onion, minced celery, butter, chicken stock, poultry seasoning, salt and pepper. You will want meat in this dish, so get some cooked sausage from the supermarket and slice it up. Mix everything together and microwave it for five minutes. Skimp on the stock at first and add more if it’s dry. You can add liquid but you can’t take it away. So you have most of your meal ready to go, but you know that there has to be something sweet at the end to balance out that heavy meal. And if you’re a real American, you eat pumpkin pie on Thanksgiving.

You’ll need one egg, a half-cup of pureed pumpkin, two tablespoons of sugar, and a teaspoon of pumpkin pie spice, which is just cinnamon, ginger, nutmeg, and cloves. This is a crustless pie because the filling is the only part that matters. Mix all of that together in a bowl and microwave it for two minutes or until the filling is cooked through. Now take out your pie filling and toss it in the freezer to cool down. Plate up the rest of your meal, all of which you already cooked. Microwave the whole plate to reheat everything for a minute or two. Eat it. Eat your pie. Cry yourself to sleep. Happy Dorm Room Thanksgiving.