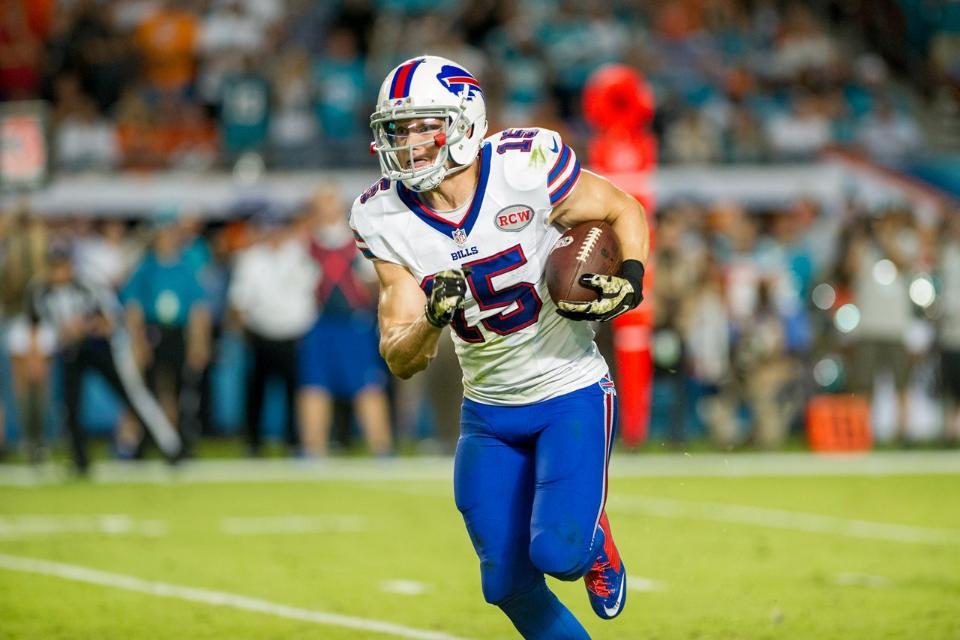 Former Penn State lacrosse player Chris Hogan has made an impact this year in a place that not many expected: the NFL.

The fourth-year wide receiver made it into the league as an undrafted free agent from Monmouth University, where he spent his final season of collegiate eligibility playing football. His journey to the NFL was not easy, but ever since he was promoted to the Bills’ 53-man roster, he hasn’t looked back.

Chris Hogan was a talented multi-sport athlete at Ramapo High School in New Jersey, where he played lacrosse and football. Prior to his high school years, Hogan was quite the baseball player, but a torn rotator cuff rendered his throwing arm much weaker than before, forcing him to pick up a new spring sport.

That is when lacrosse came into his life. As a ninth grader, learned the sport and progressed rather quickly. By the time Hogan’s sophomore year rolled around, he was elevated to the varsity team. As his high school career carried on, the accolades rolled in — second team All-League his sophomore year, first team All-County and All-State his junior and senior years, and State Player of the Year his senior year.

“My dad played lacrosse in high school on Long Island,” said Hogan in an interview with Buffalo Bills reporter Chris Brown. “He had an old stick in the garage and I picked it up and he went out there with me and started tossing it around. Just being an athlete I was able to pick it up really quickly and it just kind of went from there.”

Hogan was also a talented wide receiver during his time at Ramapo, where he received All-State accolades while also landing on the New Jersey Football Top 100 list and Tri-State Heisman Team after a stellar senior season. Despite garnering offers to play football at mid-level division one schools, Hogan decided to play lacrosse, choosing Penn State over hoards of national lacrosse powerhouses.

Hogan did not disappoint as a Nittany Lion. After starting as a freshman at midfield, he went on to tie for fourth on the team with 11 goals, while shooting .574 percent. His sophomore season came to an end after three games due a high ankle sprain. Despite playing in so few games, Hogan was still able to score two goals. Hogan came back the following season with a vengeance, posting a team-high 29 goals and five assists, earning him first team All-ECAC honors.

Hogan’s senior season brought more success, and established himself as one of the best midfielders in the entire country after scoring 15 goals and posting nine assists, again garnering himself first team All-ECAC honors. Despite a successful collegiate lacrosse career, Hogan’s passion for football still burned strong. Since his sophomore year was lost to injury, Hogan still had one more year of athletic eligibility remaining, and with it he strapped on the helmet and laced up the football cleats.

At first, Hogan expressed interest to play for schools such as Rutgers and Syracuse, who were enticed by his abilities on the gridiron. Complications arose with the NCAA regarding its transfer policy, and Hogan would be unable to attend another major division one program. Hogan and his family then decided to send his high school tapes to Monmouth University, which was not too far from his home in Wyckoff, New Jersey. Monmouth welcomed Hogan with open arms, and just like that, he was back out on the football field.

Hogan displayed his athleticism and versatility as a two-way player while at Monmouth, lining up as cornerback and wide receiver.

“When I went to Monmouth, starting off I didn’t have any plan to play in the NFL,” Hogan said in an interview with laxmagazine.com. “It was like back in high school, just being that guy that could go play offense and defense. It was like that in lacrosse. I was a two-way midfielder.”

Hogan’s statistics did not pop off the charts, as it was his first football action in over four years. He made 28 tackles and recorded three interceptions on the defensive side of the ball, and put up 12 catches for 147 yards and three touchdowns as a receiver. Despite being relatively unknown within NFL scouting circles, his football resume earned him a pro day invite at New York City’s Fordham University. The 6’1, 215-pound Hogan impressed during his workouts, running a 4.47 40-yard dash, while also recording 28 reps of 225 pounds in the bench press.

After going undrafted, the San Francisco 49ers signed Hogan as an free agent, giving him the opportunity to make the transition from college lacrosse to NFL football. He injured his ankle early on in training camp, forcing him to lose precious reps. The lost time buried Hogan on the depth chart, resulting in his release from San Francisco. After getting cut, Hogan returned to his native New Jersey to coach lacrosse at Bergen Catholic High School. During the season, however, the New York Giants signed Hogan to their practice squad. Three weeks later, he would again be released. He remained a free agent up until the final week of the 2011 NFL season, when the Miami Dolphins signed Hogan to their practice squad.

It was in Miami where Hogan would gain some popularity as a fan favorite on the HBO series “Hard Knocks.” Hogan’s play in training camp drew the attention of some notable Dolphins players, including running back Reggie Bush. Bush dubbed Hogan “7-Eleven” because he was “always open.” Despite his catchy nickname and relentless effort during camp, Hogan would eventually be released by the Dolphins.

He worked out with the Buffalo Bills soon after his release from Miami, and he would be signed two months later to Buffalo’s practice squad. With the Bills receiving corps in shambles due to injury, Hogan was elevated to the Bills active 53-man roster. The 2012 season ended with Hogan posting no statistics, but 2013 would be a different story.

After being resigned to the bench in 2013, Hogan won the final wide receiver spot over a much larger Brandon Kaufman, who came in at 6’5, 235 pounds. Playing under new Bills head coach Doug Marrone — the man who once expressed interest in adding Hogan to his Syracuse Orange football team — Hogan made a noticeable impact. Be it on special teams or in the slot, Hogan gave everything he had just to make a difference.

Hogan went on to record 10 catches for 83 yards, while making an appearance in all 16 games for the Bills. He flashed his special teams savvy as well, tallying 10 tackles on the year. Hogan got a full offseason in 2014 to hone his skills further, all while working with then starter E.J. Manuel, which gave him confidence going through training camp. He would survive roster cuts and find his name on the Bills final 53-man roster.

Chris Hogan is an overachiever, be it hustling to block on a run play, or fighting to make a tackle on special teams. Despite all of his high school accolades, he still needed to prove himself among the most elite athletes in the country. It is no coincidence that his perseverance has resulted in a role in the NFL.

On Oct. 12, Hogan reached one of the biggest milestones a young player can achieve: his first NFL touchdown in the fourth quarter against the New England Patriots. Lined up in the slot next to Robert Woods, Bills quarterback Kyle Orton beat the defense with a hi-low route combination, and found Hogan in the corner of the endzone for the score.

Hogan also reminded his former team, the Miami Dolphins, why it should’ve kept him around with a seven catch, 74-yard performance in front of a national television audience on Thursday Night Football. Although the Bills lost, Hogan showed NFL fans across the country just how good an undrafted wide receiver who played one year of college football can be.

Hogan is becoming a fan favorite in Buffalo, and has solidified his role as the Bills’ go-to wide receiver in the slot, with 25 catches for 307 yards and two touchdowns on the season. He has thrived playing alongside young wide receivers Sammy Watkins and Woods, and based on the rate he’s going, should continue to get the ball thrown his way.

Making the jump to the NFL after playing four years of college lacrosse is no easy feat, but as the NFL season progresses, Chris Hogan continues to prove his doubters wrong and make a name for himself with the Buffalo Bills.