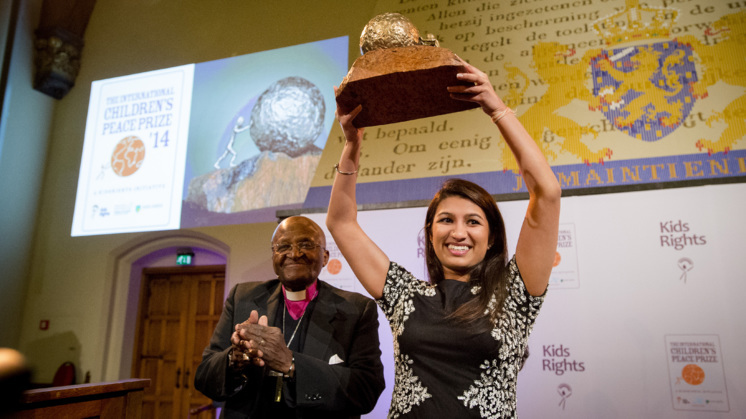 A Penn State freshman and Philadelphia native today became the first American to win the International Children’s Peace Prize for her charity work.

Neha Gupta, a freshman in the Schreyer Honors College, was presented with the award today in the Netherlands. Gupta was awarded for her work in raising money for the world’s underprivileged children through Empower Orphans, a charity that she founded after an inspiring visit to India with her grandparents when she was only 9 years old. The organization’s goal is to help orphans and other abandoned children, specifically in India and the United States. The project has grown into a charity that has raised more than $1 million and helps more than 25,000 children.

“Neha’s leadership, vision and work ethic have helped countless orphaned, abandoned and impoverished children, and most remarkably she was just a child herself when she began this work,” said Penn State President Eric Barron in the press release. “We’re very proud that she has been recognized with the 2014 International Peace Prize, and hope that this visibility with inspire others to also pursue worthy endeavors to benefit humankind.”

Some of the projects that Gupta’s foundation helped create include:

The majority of the charity’s funds come from making and selling wine charms at community events, and to friends and family. There have also been several corporate sponsors giving generous donations. To help out the cause yourself, visit the website’s donation page. Future projects that the organization is looking toward include micro-financing, solar projects, and vocational training centers.

Starting in 2005, the Peace Prize is annually given to “a child anywhere in the world for his or her dedication for children’s rights.” It’s the same award that was given to Malala Yousafzai (whose father is speaking at Penn State tonight) last year for her efforts in women’s rights to education. Malala then went on to win the 2014 Nobel Peace Prize.

Though this award is the most prestigious, Gupta is no stranger to them. Her laundry list of accolades includes:

ABC News recently profiled Gupta, as you can see below: