The Great Wings Over Bracket, Pt. 7: The Champion 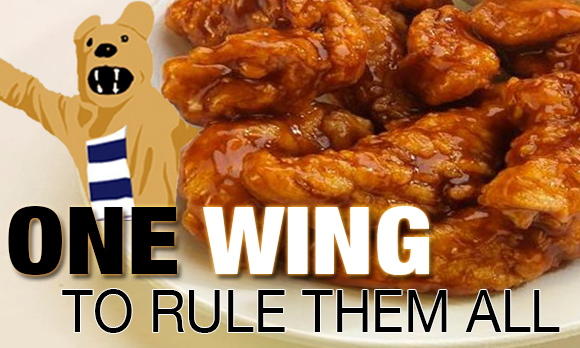 “And believe me, a good piece of chicken can make anybody believe in the existence of God.” – Sherman Alexie

When I came up with the idea of seeding wing flavors and pitting them against each other, I never thought it’d take off like this. Like many Penn Staters, I had heated debates with my friends over how to best divide our order from our favorite chicken joint. The argument that sparked this bracket occurred a few months ago, when a friend told me that Golden BBQ was definitively the best Wings Over flavor, an abject falsehood I rejected immediately. There was no way, as a community, we had decided on a best flavor yet, and that needed to change.

When I set about on this quest, I knew it would be difficult. Seeing flavors I love, flavors like Honey Mustard and Cajun Blackened, knocked out before their time hurt. It was worth it though. This great endeavor is proof that the Penn State community can band together on just about any topic, especially if that topic is crispy chicken bits covered in calorie-laden sauce. I want to thank you all for participating in what might just be the most important survey ever done.

Without further ado, the winner of The Great Wings Over Bracket is: We all knew this was going to happen. It was destiny. It was Lew Alcindor and John Wooden’s UCLA walking through March like they were playing in an AAU tournament. It was Tiger Woods on the back nine at Augusta. There were moments where you thought somebody else had a chance, but deep down, you knew it wasn’t meant to be.

Despite losing in the championship, you have to respect Sweet Chili’s hustle in this tournament. It was a No. 1 seed, sure, but there were always concerns: whispers that the seemingly more out-there name of the flavor could be its ultimate demise. In the end, it fought valiantly, the closest anyone came to beating Honey Barbecue in what was an undefeated season.

The community decided, and decided with force. Until the final round, it scored no lower than 60 percent of the vote. In the championship, after nearly 4,000 votes cast, Honey Barbecue received 55.67 percent to defeat Sweet Chili. The result was close, but the victor was never in doubt. While many will argue Honey Barbecue to be overrated, the fact is it had passionate supporters and an elite level of lovability. It’s hard to compete with a flavor as robust and comprehensive and deep as Honey Barbecue, and it proved its worth in the end.

The crown belongs to Honey Barbecue, the first ever undisputed champion of The Great Wings Over Bracket. Now, go order to celebrate the victory. The flavor deserves it.

Share via
The Great Wings Over Bracket, Pt. 7: The Champion
https://onwardstate.com/2015/01/16/the-great-wings-over-bracket-pt-7-the-champion/
Follow @onwardstate
Send this to a friend