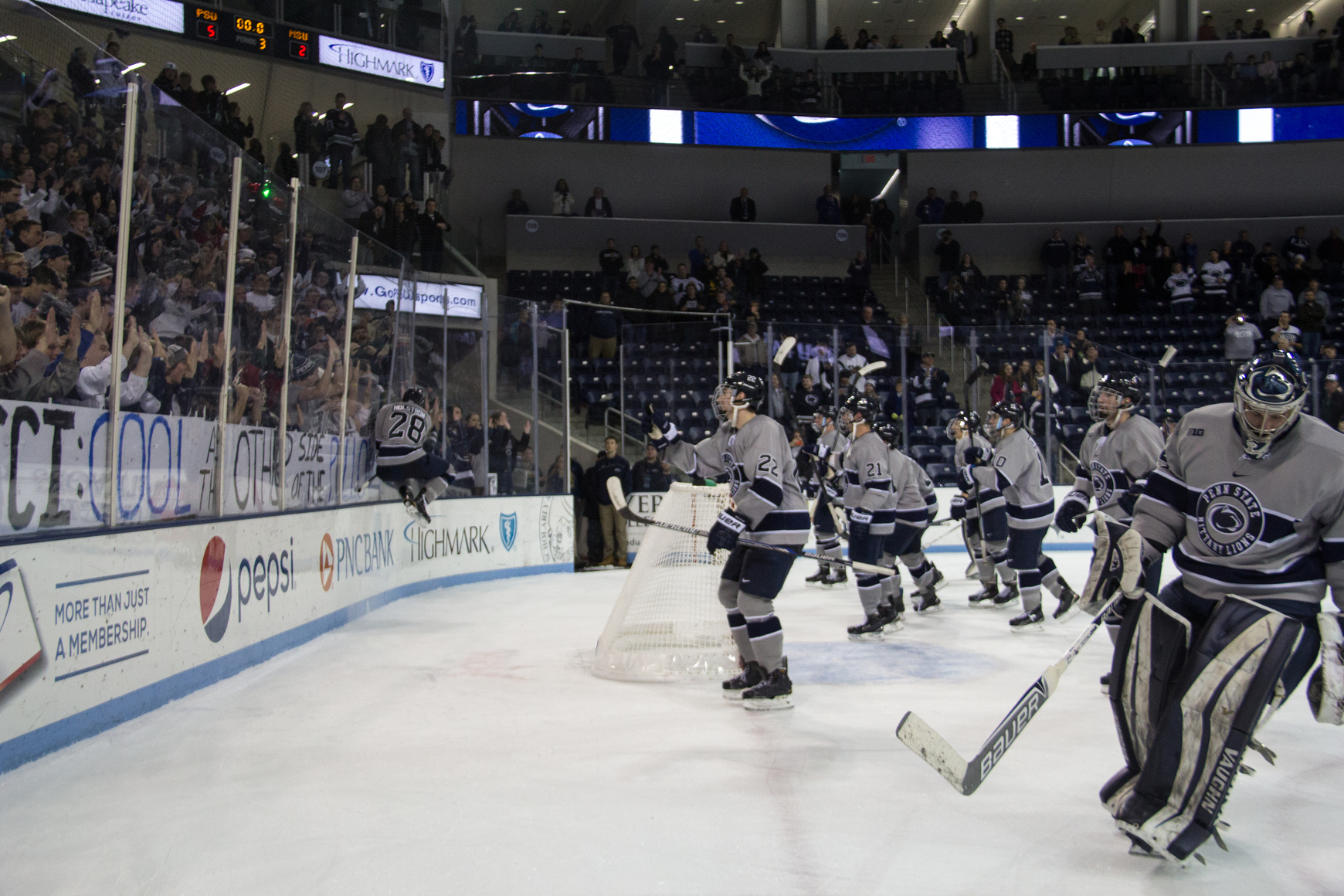 Penn State’s second-biggest attraction tonight was across the street from THON, where Penn State took on No. 17 Minnesota in the teams’ first game of the weekend series. The arena was filled with electricity start-to-finish, but Minnesota came away with the 2-1 win. Goals were scored by Penn State’s David Goodwin and Minnesota’s Christian Isackson and Justin Kloos. Goalie P.J. Musico was credited with the loss while Adam Wilcox earned the win.

The Lions came out flying and dominated physical play for the first few minutes of the game. Unfortunately, as would be a common occurrence throughout the night, Penn State found itself on the penalty kill, and the momentum that it was trying to generate was stifled.

Despite displaying less discipline than Coach Guy Gadowsky would have preferred, Penn State escaped the period with a one-goal lead. Erik Autio started a rush up the ice, then quick passing between David Goodwin and Taylor Holstrom ended when Goodwin fired a laser past Wilcox.

The lead wasn’t to last, however. Less than three minutes into the next period, a long shot from the point hit Isackson’s stick down low and deflected past Musico. One minute after the Golden Gophers tied the game, a Zach Saar penalty gave them the man-advantage yet again. They had no trouble converting, when Kloos cut to the slot and beat Musico just inside the post.

An uneventful end to the frame saw Minnesota comfortably maintain its lead into the third.

The third period, as had become customary, was a flurry as the Nittany Lions tried to even the score. Adam Wilcox stood on his head in the frame, turning away all fifteen shots he faced. With two minutes left, Gadowsky pulled Musico as his team tried to take advantage of some 6-on-5 play. The effort didn’t result positively for the Lions, and the Gophers held on to take the 2-1 win.

Gopher goalie Adam Wilcox. His 1.00 goals-against-average and .971 save percentage are what coaches dream of.

Quote of the Game

“I felt that we weren’t committed enough to stay out of the box. It doesn’t take Scotty Bowman to figure out that they’re good on the powerplay,” Gadowsky said after the game.

Apt analysis from Bucci Mane himself. “Wilcox single-handedly won it for [Minnesota] in the third period,” he told me after the game.

Saturday, Feb. 21, the two teams will rematch at 5 p.m. The game will be aired on ESPNU and WatchESPN with Blake Geoffrion and John Buccigross on the call.

Share via
Penn State Hockey Falls to Minnesota 2-1 on THON\'s Opening Night
https://onwardstate.com/2015/02/20/penn-state-hockey-falls-to-minnesota-2-1-on-thons-opening-night/
Follow @onwardstate
Send this to a friend