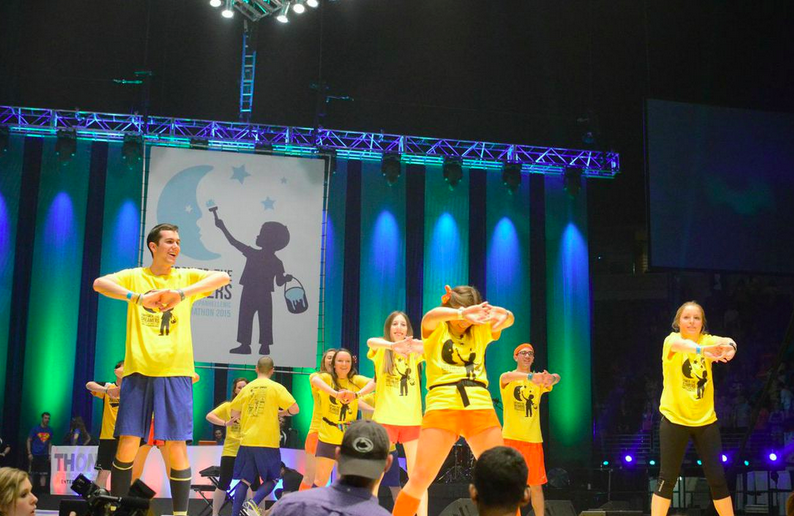 We’ve nearing the Sunday of #THON15, and it has been an electric first day-plus. All of the events have been well-planned and executed, and you wouldn’t be able to guess how long the dancers have been going at it by looking at them. It’s easy to say THON’s looked fun from a media perspective, but what do the other attendees think? We took to the bleachers and the internet to find out.

(Spoiler alert: The folks love it.)

“It’s my first year on a committee and it’s been pretty awesome,” Allison Monkman said. “I’ve been here before but just as a spectator. It’s a lot different to actually be a part of the event.”

“This is my second year on a committee and last year I did R&R and I really really am enjoying this THON a lot more, just because I really like my committee. Everything else is just awesome,” added Kaila Marunaik.

Chris Dudek, originally from Wisconsin, came back for THON and also holds it in high regards. “I got here for the human tunnel at 4 p.m. Friday so I’ve been here for a while. I’m not counting the hours but it’s been insane. Even with the weather being terrible, the lines have been enormous. In the past I’ve been involved in committees and stuff for the past four years so I’m coming back as a visitor this year and it gives you a different perspective. It’s absolutely packed, energy through the roof. When you hear those beats and see the kids singing stuff, it really moves you. It gets emotional here towards the end and you’re seeing a lot of that. It’s been a phenomenal journey, the past few years have been amazing, and this year is stacking up too.”

“I was here for seven hours yesterday and nine hours today and it’s been unreal,” said freshman Kenny Grozier. “It’s my first THON at Penn State and it’s unlike anything I’ve ever seen before. All the songs, all the dances, and all the events have been great to see and be a part of.”

Next time I sit down it'll be 4:00 tomorrow afternoon… But it's all worth it! #THON

The impact of THON was even felt across the street, as the hockey team channeled more #PegulaMagic in an overtime win against No. 17 Minnesota.

"I thought we benefited a lot from both Thor and @THON" – Head coach Guy Gadowsky's opening statement.

Whether you’re on the floor, in the stands, or following along from home, how is this year’s THON so far? Let us know in the comments!