Donovan Smith Drafted No. 34 Overall By The Tampa Bay Buccaneers 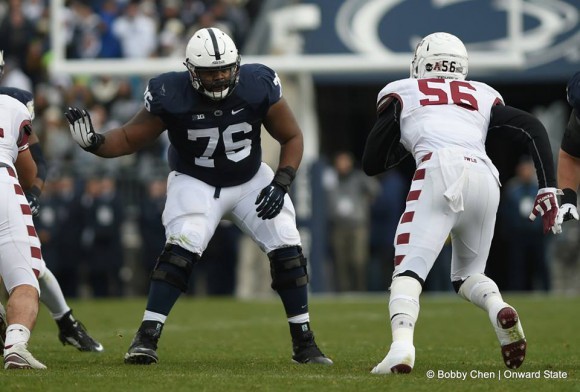 Former three-year starting left tackle Donovan Smith, who left Penn State with a year of eligibility remaining, was selected by the Tampa Bay Buccaneers in the second round, No. 34 overall, of the 2015 NFL Draft. The massive left tackle fell right where he was predicted by many experts, becoming the highest Penn State draft pick since defensive end Jared Odrick went 28th overall to the Miami Dolphins in the 2010 NFL Draft.

Smith’s stock has been soaring ever since a dominant showing at the Senior Bowl in January, coupled with an impressive performance at the NFL Combine. Smith will team up with offensive tackles Demar Dotson, Kevin Pamphile, and Matt Patchan to bolster the team’s front five, and could become a permanent fixture protecting Jameis Winston’s blindside.

Smith protected the blindsides of both Matt McGloin and Christian Hackenberg during his time at Penn State. He flashed brute-like strength in pass protection, going up against some of the top pass-rushers in the Big Ten.

The announcement was made a bit sweeter by the fact that Smith was invited to attend the draft in person, a rare honor reserved for only the top prospects in each draft.

Congrats Donovan, and best of luck in the NFL.