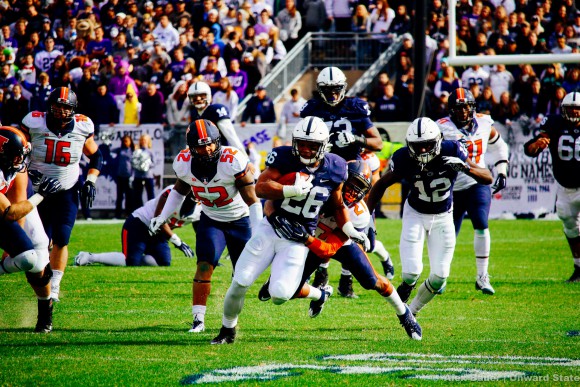 Saquon Barkley was listed as the No. 24 running back in the Class of 2015, ranking behind 23 other players signed to powerhouse programs like USC, Alabama, and Notre Dame. After a sensational freshman campaign in which he racked up 1,007 yards and seven touchdowns in his first season of Division I competition, Barkley has been named to the USA Today All-Freshman Team alongside Iowa State running back Mike Warren.

The prestigious list recognizes the top freshman players in America, and is reserved for those entering their first season of play and those who redshirted their freshman season, but still retain freshman eligibility. Barkley’s addition to the elite group solidifies his status as one of the most exciting young players in the nation, and puts him alongside some stellar talent.

Barkley is one of two Big Ten players on the list, joining Ohio State defensive end Sam Hubbard as ambassadors for the conference on a national scale.

It’s encouraging to see such a deserving young man receive the proper recognition for his stunning body of work, and if Barkley can capitalize off his surprising freshman season, he’ll surely see his name added to a number of distinguished lists in the future. Penn State has a gem in No. 26.