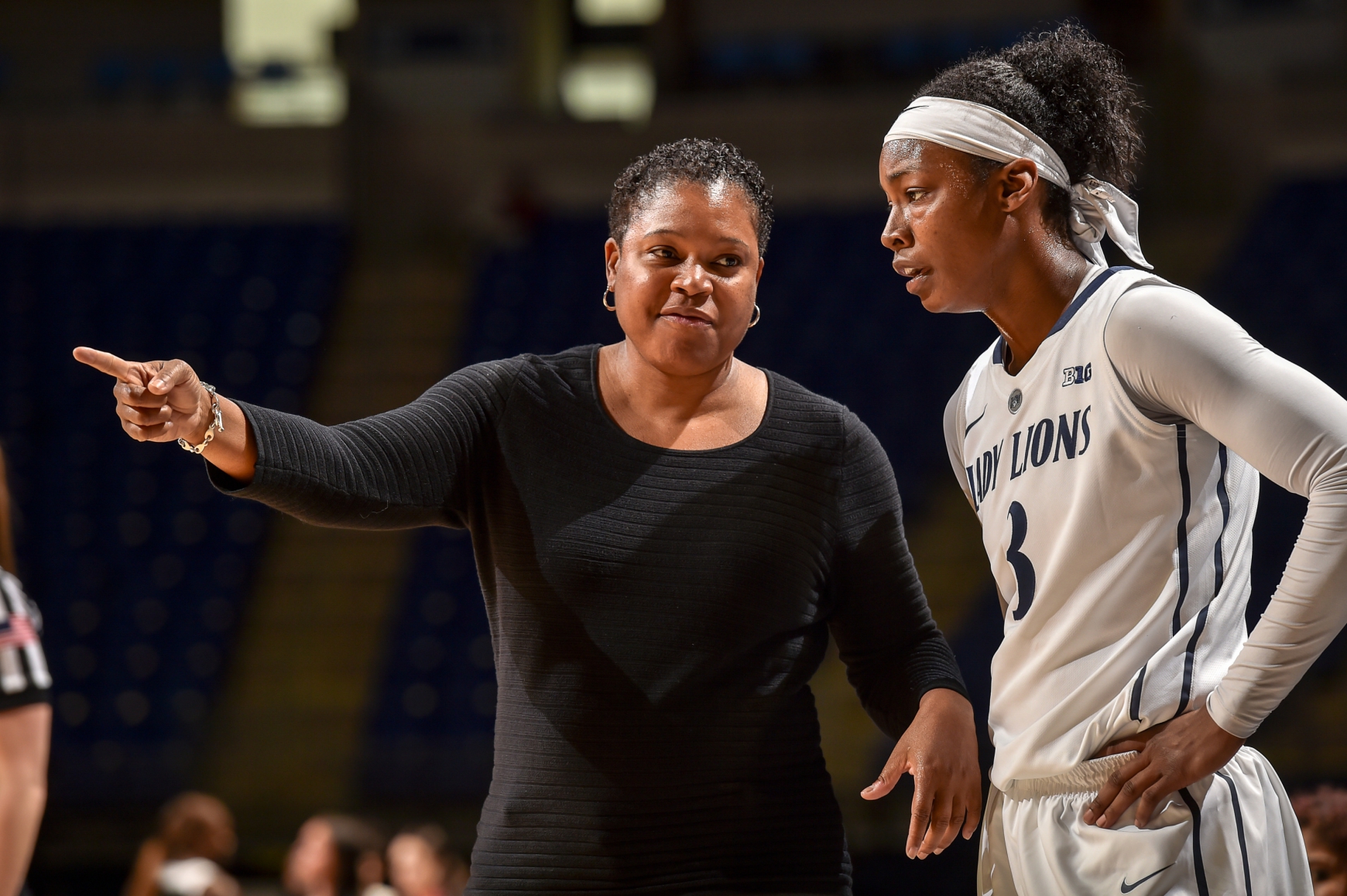 Brianna Banks is a winner. Maybe it’s the competitive drive that compels her to win at everything she does, or maybe it’s the passion she has for what she loves. One of those loves, basketball, brings Banks to the BJC as she prepares for Lady Lions Senior Night on Wednesday against Iowa at 7 p.m. But after four years of college hoops, she’s not ready to give up this love quite yet.

Banks was a top talent in AAU, named a McDonald’s High School All-American, and was highly recruited by a number of schools across the country. She ended up at UConn in a recruiting class that included future WNBA first-round draft picks Kaleena Mosqueda-Lewis and Kiah Stokes.

“The atmosphere is different because UConn people expect you to win,” Banks said. “I could say it’s a lot more pressure that you have to deal with than here.”

In her time with the Huskies, she was a key role player off the bench averaging 7.3 points in 17.1 minutes per game during her sophomore season. That breakout season was cut short because of an ACL tear, and her chances of shining in the NCAA Tournament were diminished. The Huskies went on to win the National Championship and found their future guards in her absence.

Banks’ junior season saw decreased playing time in the later parts of the season. Her Huskies were succeeding and won another National Championship, but seemingly had left Banks out of the fold. By the summer after her second championship, Banks made her choice. She would transfer to Penn State, enrolling in August 2014. “The hardest part for me was leaving the people you’ve been hanging out with the most and that I’ve spent most of my college years with,” Banks said. “It was just a sad time. It sucks that I couldn’t tell nobody to their face.”

Due to NCAA rules regarding transfer students, Banks had to sit out the 2014-15 season. The team struggled on the court and it was surely tough to watch from the sidelines. Still, she knew she would get her chance to shine for the Lady Lions in their next season.

On the court this year for Penn State, Banks has been a key veteran presence for a young team. Consistently one of the team’s top scorers and an important cog in the defense, the senior guard has been a welcome addition to the team.

“Bri is fearless,” Penn State coach Coquese Washington said. “It really doesn’t matter who we’re playing against, she’s going to be aggressive and she’s going to attack. I think our kids feed off of that. She brings that energy, that leadership, and that big game experience that we need that takes the edge off of some of our younger players.”

However, off the court, Banks is known for being quite the fun-loving person. With her SpongeBob pillow constantly by her side, she brings joy to the team. She might describe it as being “annoying,” but it comes as no surprise that teammates of the past and present love the fact she can keep it light in tough situations.

Still, when she needs to keep it serious, she does. That’s what it takes to be a leader within this team. One of the best attributes Banks brings to the court is the fiery mentality that she has become known for at the Bryce Jordan Center. When things are going well, or not so well, Banks’ voice will resonate through the arena. She’s never one to hide her emotions during games and her reactions show that true passion for the sport.

Even as she looks ahead to playing her last game at the BJC, she knows how to stay level-headed. Without any hesitation, Banks states that senior night is a chance to leave her home court with a win instead of getting caught up in the moment.

After her time at Penn State is complete, the Lady Lions star has some adventurous but attainable goals.

“Hopefully more basketball,” Banks said. “The dream is to play overseas in Germany. I was born in Germany so I’ve got dual citizenship.”

With dual citizenship, her goal isn’t only to play professionally in the German league, but also eyes a spot on the German National Team. She also acknowledged playing in the WNBA is part of the dream for some point in the near future.

Brianna Banks has had quite the journey over the course of her basketball career. As she prepares to step on the court at the BJC one last time, she’ll keep in mind the journey is far from over. That fiery passion for the game will live on for whatever jersey she dons next.