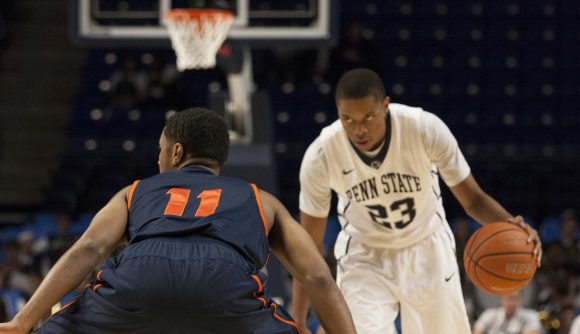 Tim Frazier’s 2015-16 campaign was in some ways a glorified highlight reel, with the former Nittany Lion point guard making head-turning performances commonplace — both during his stints with the NBA D-League’s Maine Red Claws and NBA’s New Orleans Pelicans. Frazier’s had an enjoyable offseason to say the least; the 25-year old’s consistent play with the Pelicans was rewarded in the form of lucrative job security — Frazier signed a two year, $4.1 million contract with the Pelicans after turning in a handful of impressive performances.

Though he balled out late in the season at the NBA level, arguably some of his best performances came during his time in the D-League. One in particular against the Westchester Knicks earned him a spot on the D-League’s “Top-10 Moves Of The 2015-16 Season” highlight reel.

Frazier’s highlight (seen here at No. 10) came at the expense of Knicks forward Darion Atkins, who was completely spun around by a driving Frazier. His fadeaway jumper only sealed the deal, adding to Frazier’s growing collection of standout plays.

After entrenching himself into the Pelicans’ lineup, it’s unlikely we’ll see Frazier make a return to the D-League. Hopefully Penn State’s favorite point guard will break plenty more ankles as he helps guide New Orleans into the playoffs next season.