Penn State Takes Down Michigan State 72-63 At The Palestra 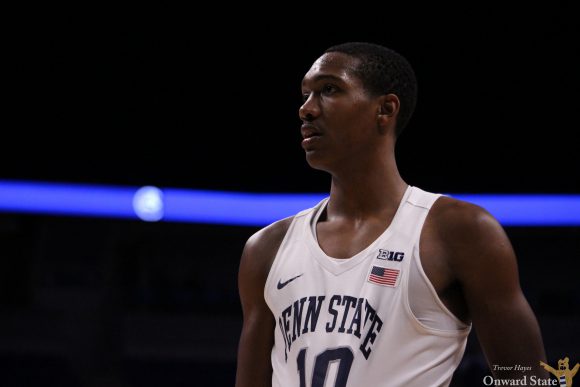 Michigan State entered the Palestra as favorites against the Nittany Lions — who were fresh off blowing a 14-point lead on the road against the Michigan Wolverines — but left the hallowed arena with a loss. The Nittany Lions played as a unit in the stunning victory over a talented young team thanks to the play of its young group of talent. Take a look at how everything unfolded in Philadelphia.

Penn State’s young guns started things off with a bang against the Spartans in the Palestra, and they looked every bit the part of veterans. After a deep three from Tony Carr — who finished the first half in double figures with 11 — Mike Watkins blew the lid off the arena after receiving a slip pass from Shep Garner and flying through the lane on his way to the rim for a thunderous slam. He proved why his ceiling is so high with dominant defensive play — including a heads up play down low and four more points in the span of 40 seconds to make it 12-6 in favor of the Nittany Lions.

Payton Banks earned his stripes in front of an electric crowd with 10 points in limited action and a dagger three later in the half to give Penn State a 27-19 lead over the battle-tested Spartans. The Nittany Lions stayed strong down low, maintaining its presence on the glass while staving off a late charge by the Spartans capped off by a Joshua Langford three that cut Penn State’s lead to seven.

The most surprising statistic was the lackluster first half performance of star freshman Miles Bridges. He finished the half 2-5 from the floor with only four points to his credit.

The second half began on a much different foot than the first after the Nittany Lions allowed the Spartans right back into the contest with a fast-paced series that ended with Michigan State cutting the lead to seven behind Langford and his stingy unit.

Shep Garner made some history midway through the final half by becoming the 32nd Nittany Lion to eclipse 1,000 career points. What made it even more special was the fact he did it in his hometown at one of the most historic arenas in America.

Meanwhile in the half, Josh Reaves broke out of his shell and made plenty of these types of plays after an impressive showing.

Josh Reaves just put a serious hurtin’ on the rim for @PennStateMBB. https://t.co/DgrVHZoq31

In the end, it was the defensive prowess of the entire unit that willed it to victory — along with some clutch late shooting from Tony Carr, who finished the contest with 14 points — and proved how high the ceiling is for Pat Chambers’ young unit. It also proved why fans need to stay patient; Michigan State’s record may seem lackluster, but its non-conference resume is far from it. This is a talented young team, and the Nittany Lions gelled and played as a unit. This win was no fluke — it was hope.

A handful of Nittany Lions earn this tag, but Carr rebounded from a five point performance to lead Penn State in scoring in arguably its biggest victory of the year. His development is evident, and he played a major role in today’s important victory. He finished with 14 points, six rebounds, and three assists.

The Nittany Lions are off until Jan. 14 where they take on Minnesota at noon in the Bryce Jordan Center on ESPNU.