Men’s Basketball Takes Down No. 24 Minnesota 52-50 With Late Free Throws From Tony Carr 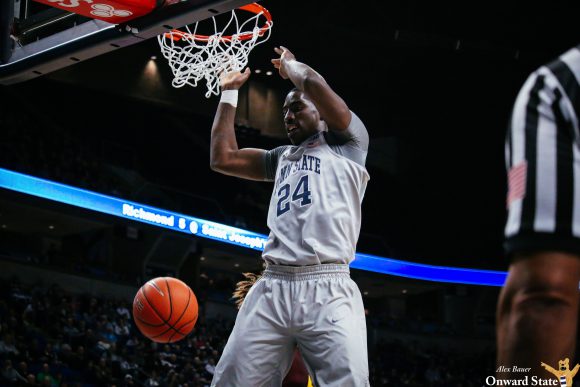 Penn State (11-7, 3-2 Big Ten) returned to the Bryce Jordan Center for the first time since its loss to Northwestern in late December to open Big Ten play. Minnesota (15-4, 3-3 Big Ten) was Penn State’s opponent on the day, and the Golden Gophers couldn’t hold on to a double-digit first half lead as Tony Carr nailed two late free throws to secure a 52-50 win for the Nittany Lions.

Penn State got off to a slow start from the field — hitting just four of its first 15 shots. Minnesota was hitting its shots, but quality defense from the Nittany Lions forced a number of turnovers to keep the Golden Gophers in check for the first few minutes of action. A 11-2 run midway through the half helped open up a 20-8 lead with 10 minutes. Minnesota shot 67% from the field to open up the double digit lead through the first quarter.

Offensive production slowed down even more during the second quarter of action. Minnesota suffered through a stretch of 4:39 without a bucket, while Penn State’s shooting woes continued — hitting just two of 12 during one stretch late in the half. Ameer Springs nailed a three to end the Golden Gopher drought and Dupree McBrayer knocked down another from beyond the arc to open up Minnesota’s lead to 14 with just a minute left.

Penn State managed to cut the lead to 10 heading into halftime. Mike Watkins was the leading scorer for either side in the low-scoring first half with six points and he added eight rebounds as he went into the break on his way to a double-double. The Golden Gophers led 32-22 after 20 minutes of play.

Julian Moore came out in the second half flying — scoring four points including a put-back slam — and Payton Banks added a three as Minnesota was forced to call timeout with its lead cut to six. Watkins secured his fourth double-double of the season with a slam to bring the Nittany Lions within one possession, trailing 38-35 with just over 11 minutes remaining.

Watkins continued to pounce on the Golden Gophers, giving Penn State the lead on a three-point play with 10 minutes left. Minnesota retook the lead after Josh Reaves was called for a flagrant foul on Golden Gopher fastbreak, which turned out to be a four-point swing. Reaves came back strong, drawing a number of fouls and coming up with a huge block as part of a good day all-around for the sophomore.

Payton Banks drained the game-tying three with two minutes remaining, but Minnesota went straight back down the floor with a Nate Mason jumper to make it 50-48. Watkins hit a pair of free throws on the next trip down the floor and a jump ball gave the Nittany Lions a chance to take the lead. Josh Reaves secured an offensive rebound to give Penn State last shot, and Tony Carr was fouled with five seconds left.

Carr hit both foul shots and Minnesota missed a deep three and a put-back opportunity as time expired with the Nittany Lions coming back from a 14-point deficit to win 52-50.

The first-year player recorded his fourth double-double on a lower scoring day in the BJC. He finished with 15 points and 15 rebounds in the tight win over the Golden Gophers.

The Nittany Lions are back at the BJC on Wednesday for a clash with Indiana. Tipoff against the Hoosiers is at 7 p.m. and can be seen live on BTN.

Share via
Men\'s Basketball Takes Down No. 24 Minnesota 52-50 With Late Free Throws From Tony Carr
https://onwardstate.com/2017/01/14/mens-basketball-takes-down-no-24-minnesota-52-50-with-late-free-throws-from-tony-carr/
Follow @onwardstate
Send this to a friend