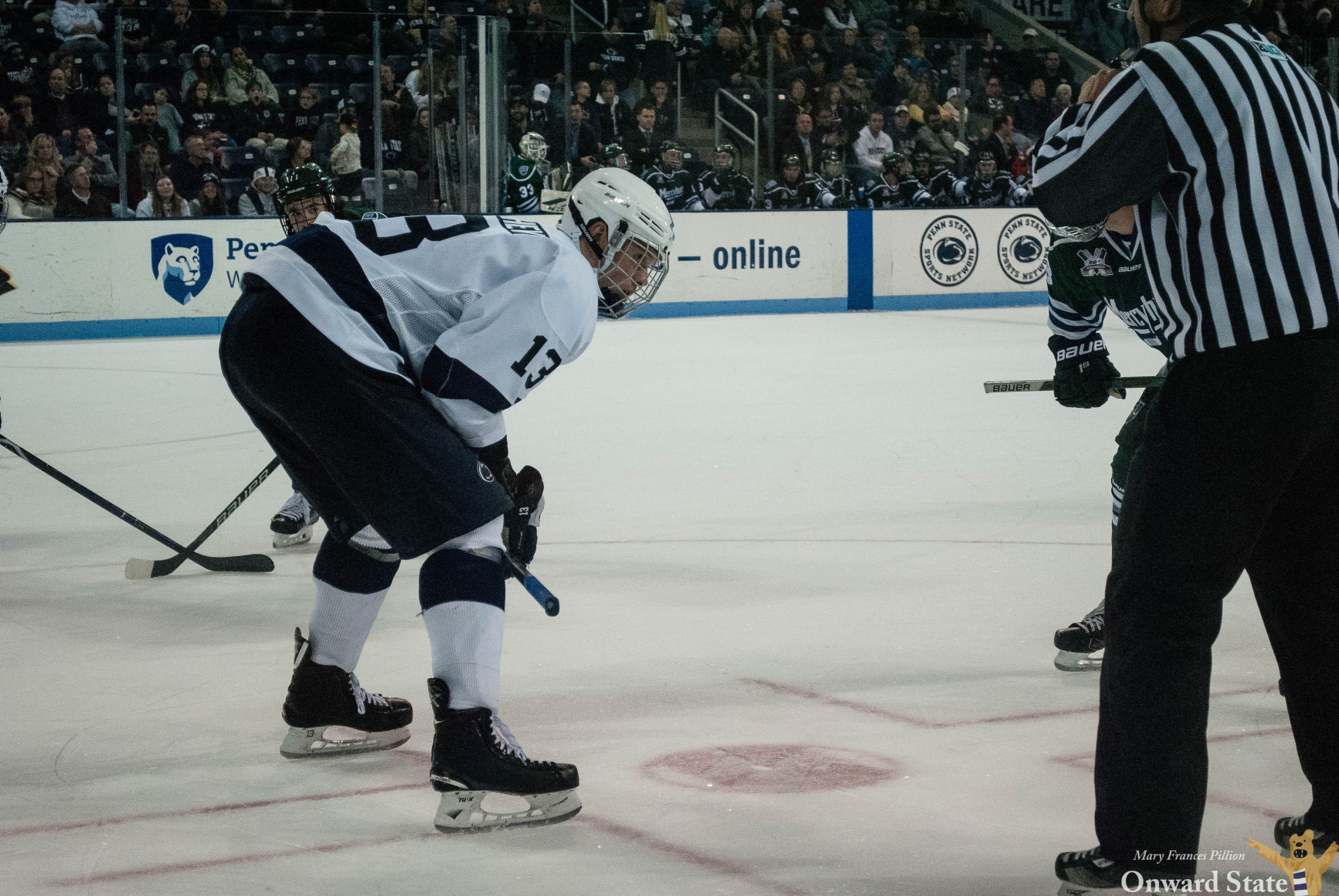 Blake Gober scored the opening goal of tonight’s game for Penn State and Nikita Pavlychev and Andrew Sturtz each scored a goal in their fourth consecutive game tonight.

Peyton Jones made 14 saves in the defeat.

Penn State was the better team for a good chunk of the first period and wasted very little time in jumping out to the first lead of the game.

After a number of slow starts in the first ten games of the year, Blake Gober buried a perfect feed from Alec Marsh at 4:39 of the opening frame. Defenseman Derian Hamilton picked up the secondary assist on Gober’s second of the season.

Notre Dame responded with a goal of its own with 8:05 left in the first. Bo Brauer’s first goal of the season tied things up, but the Nittany Lions would respond well to conceding this goal.

Penn State took over and generated plenty of offensive chances, but the team’s pressure would not be rewarded until the final minute of the frame.

Nikita Pavlychev restored the Nittany Lion lead with 29 seconds left in the period with a beautiful shot past Notre Dame goalie Cale Morris. The big Russian’s fifth of the season was assisted by Liam Folkes. Pavlychev now has goals in four consecutive games for Guy Gadowsky’s squad. Penn State held this lead heading into the first intermission.

In the second period, Notre Dame tied the game midway through the period off the stick of Bobby Nardella. His shot from center ice trickled past Peyton Jones with 10:46 left in the frame.

The Nittany Lions responded to Nardella’s goal by putting the puck right back into Cale Morris’ net, but the goal was disallowed. Kris Myllari’s point shot beat Notre Dame’s goalie, but the referee determined that Morris was interfered with and washed out the goal.

Penn State would go to the power play shortly after the disallowed goal, but Notre Dame’s penalty kill did not concede a shot on goal during the opportunity. The Fighting Irish took momentum from the strong kill and turned it into their first lead of the evening. Andrew Oglevie scored at with 5:40 left in the period to give his team a 3-2 lead of the game.

Instead of trying to escape the period with just a one-goal deficit, Penn State responded with a goal of its own 1:28 after Notre Dame took its first lead of the evening. Andrew Sturtz’s team-leading seventh goal of the season leveled the score at three; Brett Murray and Chase Berger picked up assists on the goal.

Penn State finished the second period with a 33-15 advantage in shots on goal, but the game remained tied entering the final stanza of tonight’s matchup.

The third period got off to a slow start, but Notre Dame took a 4-3 lead with 8:19 remaining in the period after a Matt Hellickson shot was deflected into the goal by Dawson Cook.

The Nittany Lions responded with a flurry of shots on Notre Dame’s goal and maintained a high level of offensive pressure throughout the game, but the comeback effort would fall short.

An empty net goal with 19 seconds left sealed the victory for Notre Dame and saw Penn State drop to 5-6-0 on the season.

Nikita Pavlychev has been on fire for Guy Gadowsky’s squad recently. With a goal tonight, he now has five on the season and goals in four consecutive games.

Penn State and Notre Dame will finish the weekend series tomorrow at 5:30 p.m. at the Compton Family Ice Arena.