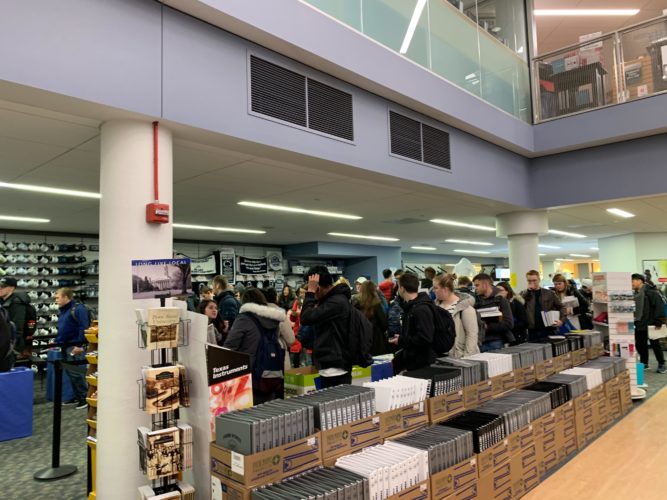 Although Sylly Week lacks the homework and stress levels of the rest of a typical semester, long bookstore lines filled with students gathering materials for their newest classes can ruin your day faster than an icebreaker in your 8 a.m.

These brutal bookstore queues can seemingly stretch for miles and take up hours of your precious time. Yet, they’re a fate every student experiences at least once during their Penn State career.

To put the line’s length into perspective, we compiled a list of things still likely to be shorter than a Sylly Week bookstore line.

The Great Wall of China

One of history’s most impressive architectural feats, the Great Wall of China, stretches for more than 13,000 miles across the northern part of the country. As incredibly long as it is, the wall’s length pales in comparison to the mighty Sylly Week line.

Yankees legend Joe DiMaggio’s 56-game hitting streak is perhaps one of the most astonishing records in all of sports. The Hall of Fame slugger batted .408 throughout this span that lasted over two months, which is less than the time you’ll be stuck in line behind that guy trying to figure out if he wants to buy or rent his books at the register.

Queen Elizabeth took the throne on February 6, 1952, and has faithfully held her position for the past 68 years — 24,442 days, to be exact. Even though you’ll spend more time in line than she has as monarch, don’t expect a crown and royal escort when you finally hand over your hard-earned cash.

A dynasty that spanned over six centuries, the Ottoman Empire quickly grew into one of the world’s most powerful states during the 15th and 16th centuries. Try not to collapse from exhaustion from waiting in line the Ottomans did after World War I.

Everybody knows Barkley has serious skills when it comes to ball security, but his streak without a fumble is a truly impressive stat. Barkley went 1065 days (and more than a thousand touches!) losing a ball unintentionally from 2016 to the beginning of the 2019 NFL season. Pray your time in line doesn’t come anywhere near No. 26’s stats.

Share via
Things Shorter Than The Syllabus Week Bookstore Line
https://onwardstate.com/2019/01/09/things-shorter-than-the-syllabus-week-bookstore-line/
Follow @onwardstate
Send this to a friend