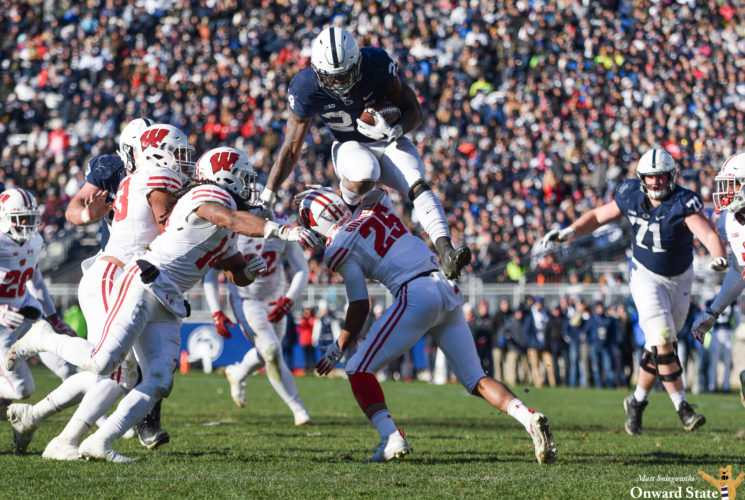 After standout performances at the NFL Scouting Combine and Penn State football’s pro day, Miles Sanders’ draft stock is on the rise. NFL Network host Peter Schrager thinks he’s done enough to be selected in the first round of the 2019 NFL Draft.

Schrager’s latest mock draft was released Tuesday morning, and he thinks Sanders will be selected by the Los Angeles Rams with the 31st overall pick. The reigning NFC champions already have an established star in Todd Gurley at running back, but Schrager thinks the team will try and bolster its depth at the position in the first round.

“Sanders isn’t getting the same pre-draft buzz as other running backs in this class,” Schrager said. “But his combine performance turned heads around the league. His pass-catching ability — SEE: the Indiana game, when he hauled in six catches for 54 yards — helps him.”

The former five-star recruit hauled in 24 passes for 139 yards along with 1,274 rushing yards and nine touchdowns during the 2018 season. He also put on impressive pass-catching exhibitions at the Combine and pro day — Sanders previously said he’s focused on that part of his game throughout the offseason because of running backs’ evolving role at the next level.

Alabama’s Josh Jacobs is the only other running back in the first round of Schrager’s mock draft. The host of NFL Network’s “Good Morning Football” thinks the Crimson Tide prospect will be selected 25th overall by the Philadelphia Eagles.

At this point, the second or third rounds are the running back’s most likely destinations once the NFL Draft gets started at the end of April. However, Sanders has plenty of momentum thanks to his strong offseason, and he doesn’t have as much wear and tear as other running backs in the 2019 draft class with just one full year of starting experience under his belt.