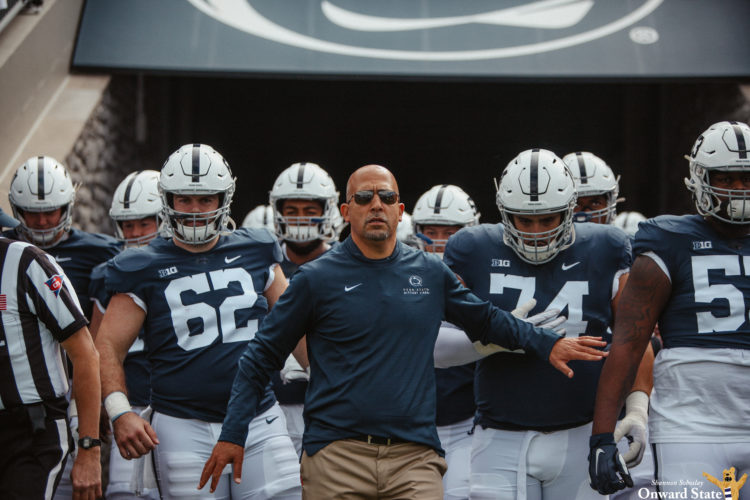 Penn State football head coach James Franklin responded to the racist letter sent by a fan to one of his players at his weekly press conference on Tuesday.

Franklin was visibly emotional and had tears in his eyes as he made the statement, which you can read below:

The football that I know and love brings people together. It embraces differences. Black, white, brown — Catholic, Jewish, or Muslim. Rich or poor, rural or urban, Republican or Democrat. Long hair, short hair, no hair — they’re all in that locker room together. Teams all over this country are the purest form of humanity that we have. We don’t judge — we embrace differences.

We live, we learn, we grow, we support, and we defend each other. We’re a family. Penn State football, Penn State University, and Happy Valley provide the same opportunities to embrace one another 12 Saturdays each Fall. PSU football brings people together like very few things on this planet. 110,000 fans from all different backgrounds throughout our region from all different parts of the state are hugging, high-fiving, and singing ‘Sweet Caroline’ together. This is my football.

Lastly, Jonathan Sutherland is one of the most respected players in our program. He’s a captain, he’s a Dean’s list honors student, he’s confident, articulate, intelligent, thoughtful, caring, and committed. He’s got two of the most supportive parents, and I would be so blessed if my daughters married a man of his character and integrity.

Franklin was also asked about his’ players response to the letter, but he insisted that he wants to keep the program’s focus on Iowa.

“I’m pretty pleased with how our guys have handled it, but the way we keep our focus is to keep talking about Iowa and preparing for Iowa,” Franklin said. “It’s not like we stick our heads in the sand and don’t have an awareness of what’s going on in our country, but I also know that our guys want to continue building what we’re building from a football perspective. The way we do that is by sticking to our process.”

In addition to Franklin’s comments, Penn State vice president for intercollegiate athletics Sandy Barbour and the university itself both responded to the letter on Twitter.

The letter was signed by a man named Dave Petersen and addressed to redshirt sophomore safety Jonathan Sutherland. The Tribune-Democrat — a local newspaper based in Johnstown, Pennsylvania — confirmed with Petersen that he did send the letter to Sutherland.

In the letter, Petersen said that Sutherland’s “shoulder length dreadlocks look disgusting and are certainly not attractive.” He also said that he and his wife “miss the clean cut young men and women” that played sports in the past, and he also said that they stopped watching NFL games “due to the disgusting tattoos, awful hair and immature antics in the end zone.”

“We congratulate you on your game against Pitt but you need to remember you represent all Penn Staters both current and those alumni from the past,” Petersen wrote. “We would welcome the reappearance of dress codes for athletes.”

You can watch Franklin make his statement below, courtesy of 247Sports’ Tyler Donohue: