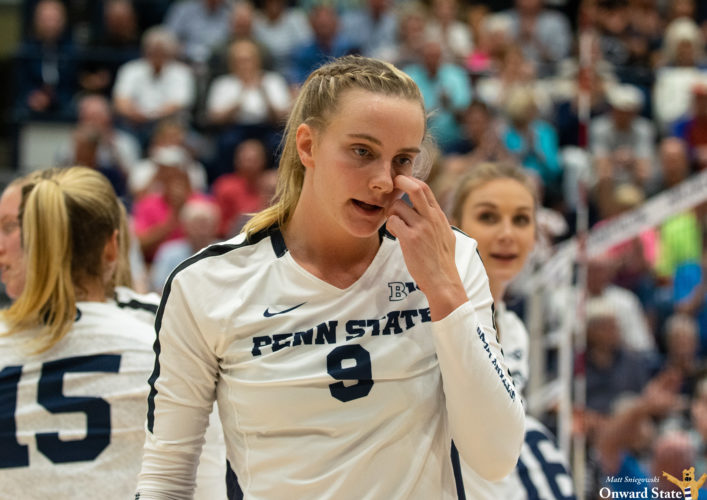 Well, folks. All good things come to an end, eh?

Blossom got things started for the Nittany Lions by serving an ace to open the match. Penn State got out to a 20-14 lead before Stanford scored four straight and ultimately took its first lead at 23-22. The Cardinal went on to win the first frame 25-22.

Stanford jumped out to a quick 3-1 lead to begin the second set and never looked back, winning the frame 25-15. The Cardinal led by as many as 10 points in the second game and hit a whopping .607 as a team to seal the victory.

At this point in the match, it was truly Stanford’s game to lose. The Cardinal looked unstoppable and the Nittany Lions were truly no match for such a potent offensive attack. Stanford won the final frame 25-17 after hitting .500 as a team and racking up 19 kills, ultimately winning the match 3-0 and punching its ticket to Pittsburgh.

Although the match was ugly on paper, Penn State played reasonably well. Tori Gorrell led the Nittany Lions with 13 kills on .667 hitting off of the bench, while Parker totaled 10 herself.

White tallied 13 digs in the match, finalizing her career total at 1,996. She’ll leave Penn State as one of the most accomplished liberos in program history after setting the team’s all-time digs record and being named the 2018 and 2019 Big Ten Defensive Player of the Year.

Speaking of Rose, the 2019 Big Ten Coach of the Year just missed the chance to record his 1,300th career victory in the loss to the Cardinal. Sitting at 1,299, he’ll need to wait until August to further cement his collegiate volleyball legacy.

Finally, if an Elite Eight loss to Stanford sounds familiar, it’s because Penn State did the same in last year’s tournament. The Cardinal went on to win that year’s NCAA Championship, and Stanford could very well be on its way to its ninth title as it heads to Pittsburgh.

Plummer played as good as it gets tonight, folks. The 2017 and 2018 AVCA Player of the Year led all players with 24 kills on .512 hitting and clearly didn’t miss a beat after being sidelined for 10 matches earlier in the season with an undisclosed injury.

The Nittany Lions’ season is now over. They’ll head back to State College as the Cardinal travel to PPG Paints Arena in Pittsburgh to play No. 7 Minnesota in the NCAA Tournament’s Final Four on Thursday, December 19.