Team McKay-Pathickal: An Open Letter To The Student Body 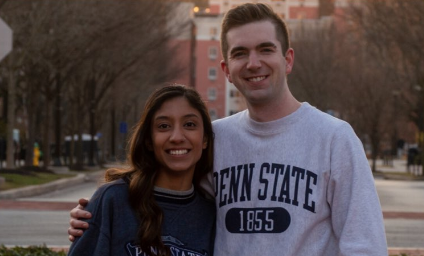 Editor’s note: This is not an endorsement from Onward State. Both tickets seeking the presidency in this year’s UPUA election were offered the opportunity to write an op-ed on Onward State about any issue or topic they’d like. You can read the Boas-Larson op-ed here.

Were we back on campus, April 15 — UPUA Election Day — might have been exactly like every other UPUA Election prior to it. The scores of students moving to shove iPads in front of folks asking for their support in a total of three seconds, the identifiable neon t-shirts with campaign logos on the front, and the rushing of apartment buildings to knock doors before the polls closed at 9:00 p.m. could all be expected. For many candidates, this day has always been viewed as the first, last, and only day of campaigning — of listening to the student body; but not for Zach McKay and Lexy Pathickal.

That they had intended to spend no money on t-shirts, but far more on virtual mediums to reach students, or that they had planned to visit individual fraternity chapters among other organizations in the weeks leading up to Election Day as part of a Campaign Listening Tour (emphasis on listening), or even that they intended to stay away from the regular suit-and-tie and opt for their casual, vintage Penn State gear makes little difference considering our newly remote circumstances in light of the coronavirus pandemic. What matters to us is that even during this time, they’ve striven to be different. They’ve been authentic, because the student body needs authentic leadership from the UPUA President and Vice President.

Our collective experience on this campaign has forever reshaped our perception of what it means to run in an election of students, by students, and for students. Since day one, we’ve watched Zach and Lexy lead our team in reaching out to hundreds if not thousands of students virtually as part of their Virtual Listening Tour. We’ve watched as they consistently challenge the status quo culture of campus sexual assault, various environmentally unsustainable university policies, and even the way which our university honors our country’s POW/MIA Service Members. They have drilled the ideals of honesty, integrity, transparency, accountability, and responsibility — ideals which have long been held in their individual leadership philosophies — into this campaign, and as a result, into their future UPUA Administration.

Because of Zach and Lexy’s genuine friendliness and approachability, we often found that as many as three students would reach out per day about problems they had seen around campus and which they’d like to see fixed. We watched as the duo worked with students to amplify those voices—not steal them—by collaborating with them on the actual language for various initiatives.

Our “living and breathing” platform — another new take on student government politics — allowed us to not only be responsive to the student body’s needs as we heard them, but actually include it in those conversations moving forward. This campaign has proven that no list of 70+ initiatives is ever needed on day one of election season, but that an open heart, an open mind, and open ears to the students we hear from will always be necessary moving forward. Collaboration with the students the UPUA President and Vice President lead is absolutely crucial, and the fact that they’re now nearing triple digits of ideas all worked on with students themselves goes miles to showing that potential.

We see the potential for real, substantive change that these two bring — trust us, we wouldn’t be on their team if not. The duo and the Policy Team have consistently released robust plans to leave this university better than they found it.

Despite the unexpected challenges we’ve faced along the campaign trail (i.e. never seeing each other in person!) Zach and Lexy’s exemplary leadership has guided us through, and we’re incredibly confident knowing we’re helping elect the ticket committed to tackling the university’s biggest problems. Zach and Lexy are by far two of the most empathetic, authentic, effective, and experienced students you’ll ever meet—if you haven’t yet met them, we’re sure you’ll agree when you do.

We can’t thank those of you who’ve joined us on this campaign enough for spending time sharing your concerns and ideas with us. What began in the midst of an unprecedented crisis has developed into a unique and truly one-of-a-kind journey that, regardless of the election outcome, is an absolute victory for student voices. We’d like to thank Zach and Lexy for being the authentic leaders and candidates our university needs in a time like this, as well as our campaign staff for the countless hours, zoom calls, and conversations spent to ensure your voice—the student body’s voice—is heard from the offices of Old Main to the highest levels of our government.

It’s clear that Zach and Lexy love Penn State like very few others. They intend to leave it a little greener, a little safer, and a little better than they found it, both for the glory of Penn State and for our shared, collective, and common future. We hope you do, too.

With love and support,