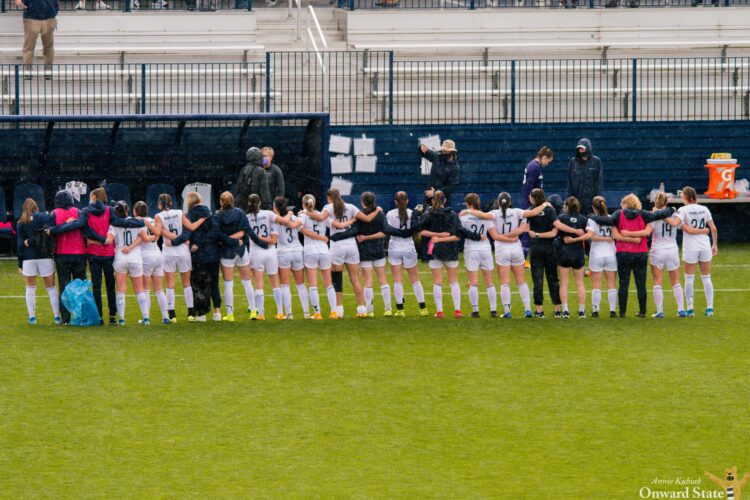 Both Penn State men’s and women’s soccer had impressive regular seasons end in Big Ten Tournament heartbreak. But in the end, it all boils down to a handful of must-win games in the North Carolina “bubble” against the nation’s elite.

For the first time in recent memory, both Nittany Lion programs have a legitimate chance of going the distance in the NCAA Tournament. With that said, here is a preview of the first obstacles for each program:

Despite being harshly underrated, the women’s team will take on Alabama State in the first round on Wednesday.

Regardless of the committee bizarrely selecting Penn State as the No. 17 seed, head coach Erica Dambach is not unfazed. If anything, she and the rest of the Nittany Lions are ready to take on the underdog mentality.

“That’s the NCAA decision. Who knows what the parameters were this year, but that is what they decided,” Dambach said of the surprisingly low ranking. “For us, we are playing with a chip on our shoulder, and that’s a good thing. This group thrives when they feel they have something to prove.”

Dambach believes that the attackers will threaten Alabama State. Senior McKenna Wiscombe leads the team with seven goals and is known for her speed and athleticism.

“They have three attackers up top who have all scored goals who can run at you and break you down 1-v-1. I think that’s where the strength of their team lies. They have a talented No. 9 who has scored goals and kind of leads the line a bit,” Dambach said.

The Nittany Lions will also need to be careful not to underestimate an unfamiliar opponent. Dambach noted that the team will be ready for everything, but it is tough to play against a team with no links to any Big Ten programs.

“To be frank, they are a little unpredictable. It’s not a team that we are familiar with, that we [haven’t] played common opponents,” Dambach said. “That actually leads to a lot of excitement right now, because it is not a team we see year in and year out. That is exactly what I love about the NCAA Tournament — different chances and different opportunities.”

Penn State will definitely be the odds on favorite to advance to the Round of 32, where the team would face No. 16 Vanderbilt. To ensure they do it without too many hiccups, the Nittany Lions need to come out strong.

The Nittany Lions have proven this season that they can dispatch teams of less quality ruthlessly. Alabama State will be a challenge, but Penn State should be able to jump on the Hornets early just as it did against Maryland on Senior Day.

“I am really pleased with the energy in this group right now,” Dambach said. “Certainly you can feel the excitement across the board. The team is in a really good place, and we are ready to kick off tomorrow night.”

Dambach also stressed that the players need to play like their classic, loose selves. A trademark of Penn State women’s soccer has been the smile of Ally Schlegel after yet another goal. That enjoyment of the game was missing in the Big Ten Tournament, which ended in a shocking semifinal defeat to Iowa.

“It is about playing with some joy again. We got a little tight [in the Big Ten Tournament], I think we got a little nervous and a little tight,” Dambach said. “We were really successful [in the regular season]. Big Ten Tournament? Not as successful. Now, we are in a phase where it could be a little bit longer. We need to understand that we have put together some really good back-to-back performances, and now, it’s about consistency.”

Jeff Cook and the men’s program will face off with the UMass Minutemen in the second round on Sunday after receiving a bye and avoiding the midweek play-in games.

The team won’t be as favorited as its female counterpart’s first-round matchup with the Hornets. However, Cook’s team still has confidence and believes it has what it takes to advance.

“When the whistle blows, we have a chance to play another great team in UMass, and we need to maximize that opportunity,” Cook said. “Every team that is traveling to North Carolina will have their own set of circumstances, but when the whistle blows 1 o’clock [on] Sunday, [we will show] that we are ready to go.”

The Minutemen played in an Atlantic 10 conference that was split into three geographical groups to lessen travel. UMass placed second in its own, tied on points with eventual conference champion Fordham, but missed out on the top four tournament spots. Instead, it tactically played Virginia Tech on April 17, where UMass earned a 3-3 draw, proving the team should be considered for the final field.

“It’s a team that believes in themselves. When you look at the matchups in the first round, you see a lot of teams with a lot of similar records. UMass is a team used to winning games and playing in big environments. They are a group of good athletes, they are really well organized, and they really believe and are committed to what they do well.”

UMass ranked No. 10 in the nation for goals per game (2.36) and No. 14 in total goals (26). Alec Hughes and Filippo Begliardi led the conference in goals scoring, tallying seven and six, respectively, in 11 games played.

The Nittany Lions will undoubtedly have trouble at times with the high-profile attack, and Kris Shakes will need to have a good game in goal.

However, the Nittany Lions have a fierce combination in front of goal as well.

Striker Danny Bloyou hasn’t been able to stop scoring since March and places second in the Big Ten with seven goals. Freshman Peter Mangione and captain Pierre Reedy have both notched five as well this campaign. With the addition of Liam Butts finally hitting his stride in the postseason, it is clear that the Nittany Lions have one of the nation’s most dangerous front lines.

It will be interesting to see how Cook deals with rotating the forwards, but the head coach sees it as only a positive.

“It means [it’s] a headache for me,” Cook joked. “We have three very talented forwards and more. It’s a great opportunity for us. It is great to have depth. I think you’ll see different combinations of those three guys on the field at different times.”

“We have a ton of respect for UMass and what they’re going to bring to the table,” he continued. “So, having three outstanding, proven goal-scorers gives you a little more confidence. We will have to be really sharp, but [Butts, Bloyou, and Mangione] are very mature, team-oriented, smart, and they are really good at soccer.”

A native of Massachusetts, Cook actually began his career as an assistant coach in Amherst, coaching the Minutemen from 1989-1991.

“I’m a Penn Stater. Don’t get me wrong, my loyalties are clear for the Nittany Lions,” Cook said. “But it’ll be a special game.”

Share via
Penn State Soccer Teams Head To NCAA Tournament With Eyes On The Prize
https://onwardstate.com/2021/04/28/penn-state-soccer-teams-head-to-ncaa-tournament-with-eyes-on-the-prize/
Follow @onwardstate
Send this to a friend