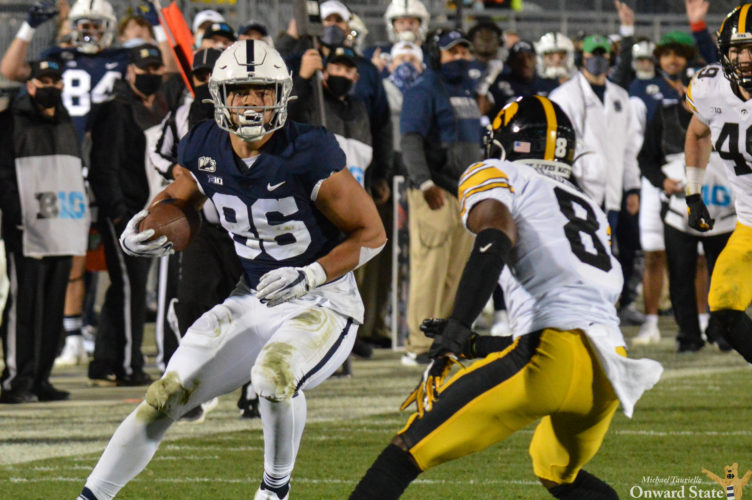 After losing such a big star in Pat Freiermuth, you might not single out Penn State football’s tight ends as a position to watch in the 2021 season. James Franklin disagrees.

The head coach met with the media on Beaver Stadium’s grass Wednesday night to give updates on the waning offseason, as a matchup against Wisconsin is just 10 days away. Amongst the other things Franklin discussed, he certainly didn’t hold anything back when talking about Penn State’s tight ends.

The room is highlighted by emerging star Brenton Strange, who recently found himself on the John Mackey Award watch list. After Freiermuth went down with a shoulder injury in 2020, Strange vaulted into the starting role, totaling 164 yards and two touchdowns on 17 receptions.

While Strange is the headliner, Theo Johnson isn’t far behind him. At 6’6″ and 250 pounds, the sophomore clearly has the physical attributes needed to build on a solid true freshman season in 2020. The room is then rounded out by redshirt freshman Tyler Warren and true freshman Khalil Dinkins.

While this tight end group has lots of potential for big plays and an explosive passing game, Franklin thinks their depth is what makes them so great. The head coach sees the top three guys on the depth chart as both pass-catching and blocking options, rather than just specializing in one of the two.

Strange, who also spoke after practice Wednesday, harped on the importance of his unit’s versatility as well.

“Versatility plays a big role,” Strange said. “There’s a lot of things that tight ends do that you guys won’t see or doesn’t show up on the stat sheet. We could make a big, impactful block and no one would ever know besides our teammates…you have to be a good run blocker, a pass protector, and you have to be good in the run game.”

The West Virginia native also believes the depth Penn State has at tight end helps make the group so special. He expects all three of them, and maybe even Dinkins, to see the field during the season. If injuries play as big of a role as they did in 2020, this extra depth will come in handy.

While Strange and Johnson got a solid chunk of experience last season, you could certainly describe this tight end corps as “new-look.” Between a new offensive coordinator in Mike Yurcich and a new tight ends coach in Ty Howle, things could look different

Despite all this turnover, it seems to be smooth sailing so far. Howle was with the program in 2020 in an analyst role, so the guys in the tight end room are already familiar with him. Of course, issues may not present themselves until it’s game time, but Howle believes offensive installment is going well.

“It’s been great. We’re a tight end-friendly offense so it’s been awesome and the guys have been making a lot of plays during camp,” Howle said Wednesday. “As far as the learning of the offense, football is football…they’ve done a great job working at it because that’s what it takes.”

It’s not just the offensive scheme that’s changed since Penn State’s tight ends last played football. Howle emphasized that the whole room has been working hard both during and outside of camp. Strange also highlighted the mental advances his crew has made since 2020.

As a younger unit, this type of maturity and mental conditioning is paramount. While Franklin expects big things from this group, it’s no secret that they don’t have as much pure experience as years past. Strange and Johnson undoubtedly showed they have great football skills last season, but the sample size just wasn’t big enough to draw big conclusions from.

Strange backed up Howle’s statement that the tight ends have been putting in work over the offseason, again circling back to the mental advances he’s made.

“I know football a lot better,” Strange said. “I have a lot more confidence in myself, as last year I hadn’t played a lot.”

Needless to say, the expectations for the Nittany Lions’ tight ends continue to grow. There’s now both internal and external pressure for Penn State to perform, but this hype hasn’t played a role in the attitude of the team just yet.

“It doesn’t mean a lot to us because the season hasn’t started yet,” Strange said. “We haven’t made any plays and until we do that, that’s what matters.” 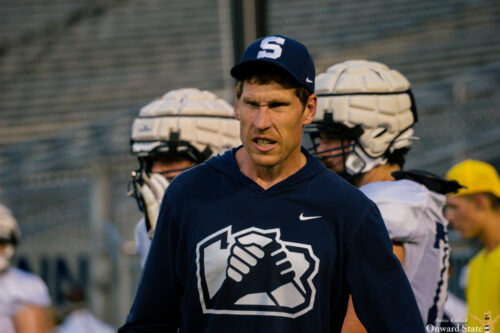 The tackle was set to graduate from Harvard and join the Nittany Lions for the 2022 season.