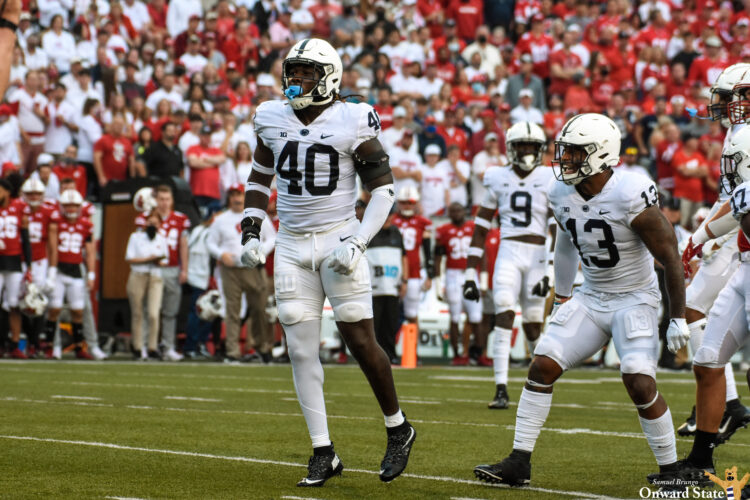 After a defensive battle in the first half that saw that game go scoreless into halftime, the Nittany Lions’ offense woke up in the second half with some big plays and more consistency. While the Badgers made some adjustments of their own and almost took the lead at the end, Penn State’s defense came up with a huge stand to hold on and win the game.

Coming into the game as 5.5-underdogs, James Franklin’s squad overcame the odds and now heads home with a huge win over a ranked Big Ten opponent.

Wisconsin won the toss and deferred its choice to the second half, giving Sean Clifford and Penn State’s offense the ball to start the game.

Noah Cain was dropped for a one-yard loss on first down, and the Badgers sacked Clifford on third down to force a three and out. Wisconsin signal-caller Graham Mertz led the offense out onto the field on their own 23-yard line.

Despite picking up a first down early on, an intentional grounding call set the Badgers back, eventually leading to an Andy Vujnovich punt.

Mike Yurcich’s offense got the ball moving on the next drive. On third down, Clifford connected with Parker Washington for a 24-yard gain to put the Nittany Lions in Badger territory. However, facing a 4th and 4 on Wisconsin’s 34-yard line, Clifford’s pass to KeAndre Lambert-Smith came up incomplete, and Wisconsin took over.

After the two teams exchanged three and outs, the Badgers started to click offensively with three first downs to bring them deep into Penn State territory. The first quarter ended with the Badgers threatening on the Nittany Lions’ three-yard line.

Brent Pry’s defense held strong to force a Collin Larsh field goal attempt. Penn State defensive end Arnold Ebiketie, who was already having a monster game, blocked the kick to keep the Badgers off the board.

Penn State’s offense just couldn’t get anything going, though, and punted the ball back to the Badgers after a three and out.

On the next drive, the Badgers ran the ball at will against Penn State, driving down all the way down inside the Nittany Lions’ 15-yard line. Then, on 3rd and 6, Mertz fumbled the ball on the exchange and it was recovered by Penn State’s Nick Tarburton. The Badgers’ 12-play, 62-yard drive ended with no points as Paul Chryst’s squad blew a major opportunity.

Once again, Penn State’s offense failed to take advantage and went three and out, which was followed up by a Wisconsin punt, too. The Nittany Lions took over at their own 37-yard line with 1:41 left in the half.

After another Penn State three and out, Wisconsin wasn’t able to put any points on the board, and the game remained scoreless going into halftime.

Penn State’s defense continued its remarkable performance at the start of the third quarter and forced a punt after just three plays. Whatever Yurcich said to his offense at halftime may have worked, as Clifford and Co. came out firing with two immediate first downs.

On the the fourth play of the drive, Clifford connected with a wide-open Jahan Dotson for a 49-yard touchdown to finally break the scoreless tie. After Stout converted the extra point, Penn State took a 7-0 lead early in the third quarter.

Unfortunately for the Nittany Lions, the Badgers answered right back with a scoring drive of their own. On the 10th play of what turned out to be a 75-yard drive, Chez Mellusi punched it in from three yards out to tie the game up at seven with 8:01 remaining in the quarter.

On the ensuing drive, Clifford found Lambert-Smith on third down for a 52-yard completion to put the Nittany Lions in business once again. Wisconsin’s defense bent but didn’t break, as the unit forced the Nittany Lions to kick a 23-yard field. Jordan Stout missed the chip-shot kick, and the Badgers took over with the game still tied up at seven.

Penn State’s defense bounced back by forcing a Badger punt on the next drive. Clifford missed an open Dotson on a deep pass on second down and was sacked on third down, leading to a Stout punt.

The third quarter ended with the Badgers driving in Penn State territory. The Nittany Lions forced a Larsh 43-yard field goal attempt, which he converted to put Wisconsin up 10-7 with 13:36 left in the game.

Penn State’s offense immediately came out firing on the next drive, as Cain broke off a 34-yard run to set up the Nittany Lions in Badger territory. Later in the drive, Clifford connected with Cain for a 13-yard gain to convert a key third down.

Wisconsin’s defense kept the Nittany Lions out of the end zone, and Stout drilled a 24-yard field goal to tie it up at 10 with 11:26 remaining.

After the Badgers went three and out, Clifford and Dotson connected for a 42-yard gain to set the Nittany Lions up at Wisconsin’s 21-yard line. A few plays later, Cain ran it in from two yards out to give Penn State a 16-10 lead. However, Stout missed the extra point, so the lead stayed at six with 9:17 left in the game.

On the ensuing drive, linebacker Ellis Brooks was ejected due to a controversial targeting call, which not only lost Penn State its starting linebacker, but also moved the Badgers up 15 yards to Penn State’s 23-yard line. Later in the drive, on 1st and goal from the one-yard line, Wisconsin fumbled the ball but recovered it on the seven-yard line.

Facing 4th and goal from the eight-yard line, Mertz threw a pass that was intercepted by Jaquan Brisker and returned all the way to Penn State’s 42-yard line.

Wisconsin got the ball back after a Penn State three and out with just over a minute left and drove the ball into Penn State’s territory. However, the Nittany Lions held strong with a Ji’Ayir Brown interception to end the game with a 16-10 win.

Penn State will host Ball State at 3:30 p.m. next Saturday in its 2021 home opener at Beaver Stadium. The game will be broadcast on FS1. 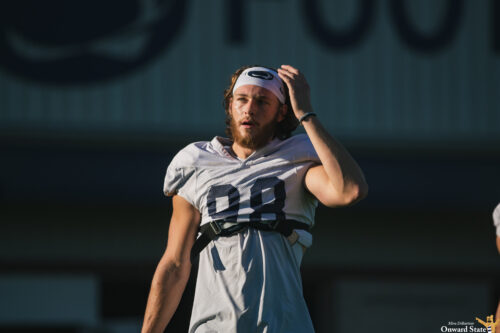