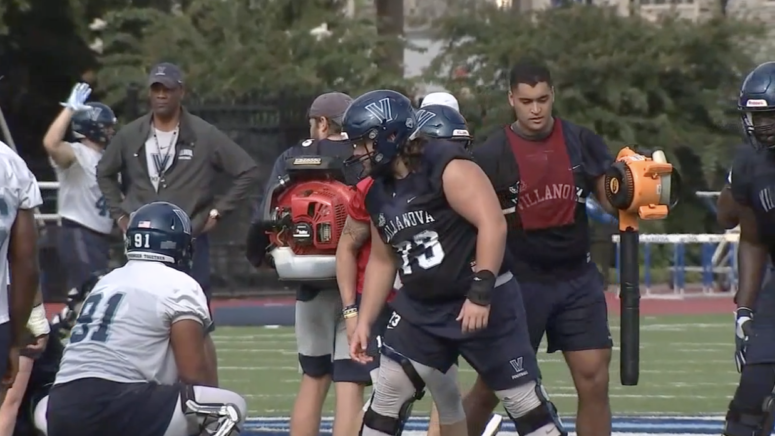 Most college football fans would agree there’s nothing quite like a raucous Beaver Stadium crowd. This week, Villanova football knows that better than anyone.

While practicing before their matchup with No. 6 Penn State, the Wildcats are reportedly using a wide array of leaf blowers to simulate crowd noise and run through plays when little can be heard. According to Philadelphia 6ABC’s Jeff Skversky, it might not be helping too much.

“It’s been helping a little, but I don’t think you can mimic what it will sound like,” head coach Mark Ferrante told 6ABC.

Asking a few leaf blowers strapped to trainers to mimic a crowd that’s #107kStrong is a tall task. In fact, Villanova’s players believe a packed Beaver Stadium would easily be the largest crowd they’ve ever played against.

“Just to simulate the noise, probably the most we have ever played in front of in the country, ” said running back Justin Covington.

Villanova’s own stadium can welcome just about 12,500 fans on Saturdays. Beaver Stadium, of course, tops out well over 100,000. Last Saturday, 109,958 fans gathered to watch the Nittany Lions defeat Auburn at this year’s White Out.

Whether it’s prepared for crowd noise or not, the Wildcats are likely in for a doozy when they head up to Happy Valley this weekend. Our staff overwhelmingly predicts a big win for Penn State.

You can catch Penn State-Villanova at noon on Saturday, September 25, on the Big Ten Network.

Share via
Villanova Preparing For Beaver Stadium Noise With Leaf Blower Practices
https://onwardstate.com/2021/09/24/villanova-preparing-for-beaver-stadium-noise-with-leaf-blower-practices/
Follow @onwardstate
Send this to a friend