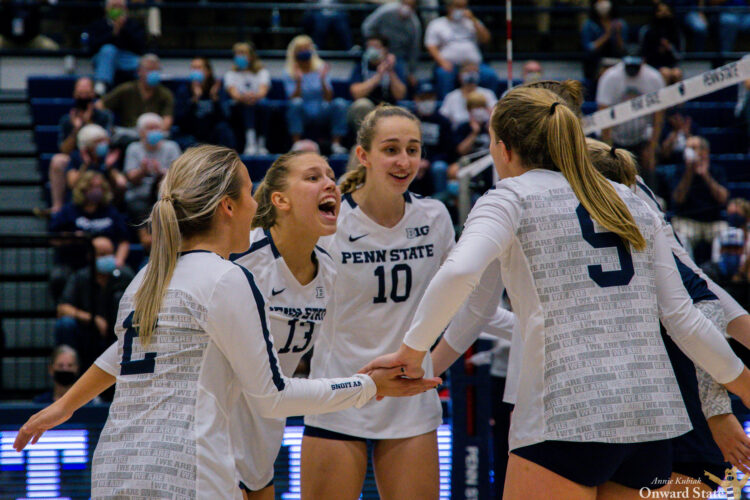 The match doubled as the Nittany Lions’ annual “Dig Pink” game. In addition to donning all-pink uniforms, Penn State asks all fans to wear pink in support of breast cancer survivors and an increase in cancer research. Proceeds from the match benefited the Site-Out Foundation, which supports breast cancer research.

Kaitlyn Hord began the night with two straight kills. A Rutgers hitting error and a solo block from Jonni Parker put Penn State up 4-0 early in the frame. The Nittany Lions took a 7-1 lead into Rutgers’ first timeout of the match.

From then on, Penn State maintained full control of the first set. Good passing and setting from Gabby Blossom helped the Nittany Lions hit well and maintain a strong lead ahead of Rutgers. By the time the Scarlet Knights had used their second timeout, Penn State led 19-11.

Penn State quickly reached set point but couldn’t convert until its fourth shot, when Adanna Rollins fired a ball to the very back of the court for a much-needed kill. The Nittany Lions won set one 25-17.

Rutgers quickly jumped out to a 2-0 lead in set two, but Penn State regained control before long. Hord and Parker made an impressive play when they combined for a block to put the Nittany Lions up 6-2. By the time Rutgers took its first timeout, Penn State held a 12-6 lead.

Later on, middle blocker Allie Holland served an impressive ace that left a Rutgers receiver stunned and put Penn State up 15-7. The Nittany Lions never looked back and won the frame 25-10 thanks to a set-winning kill from Holland.

Rutgers looked much stronger in set three, and sloppy play from the Nittany Lions certainly didn’t help Penn State’s cause. The Scarlet Knights took the lead on a few different occasions throughout the frame and brought a 15-15 lead into a timeout midway through the set. At the time of the break, Penn State was hitting just .087 in the third game.

Penn State’s momentum crashed later in set three, and Rutgers took a 24-21 lead to bring up set point. Penn State staved off a point, but the Scarlet Knights captured a 25-22 set three win — its first set win against Penn State since 2001.

Quite frankly, Penn State looked furious entering the fourth game. The Nittany Lions posted a 6-0 lead early on and forced Rutgers to burn a timeout. By the time the Scarlet Knights used their second timeout, Penn State was up 15-9.

Penn State put its head down and powered to a 25-13 win over Rutgers, solidifying a 3-1 win. A solo block from Hord iced the game for the Nittany Lions.

Setter Gabby Blossom dished out 42 assists. She and libero Jenna Hampton led Penn State with 20 and 21 digs throughout the match.

Following the win over Rutgers, Penn State is now 39-9 in the series dating all the way back to 1977. The Nittany Lions have now won 30 straight games over the Scarlet Knights.

Hord has easily made a case as Penn State’s MVP so far this season. Tonight, she led the team with 16 kills on .667 hitting. The senior middle blocker also tacked on seven total blocks, including the match-winner, to truly stuff the stat sheet.

Penn State will rest up and hit the road to face Purdue on Sunday, October 17. First serve in West Lafayette is set for 2 p.m. on ESPN2.

Share via
No. 15 Penn State Women\'s Volleyball Takes Down Rutgers 3-1
https://onwardstate.com/2021/10/15/no-15-penn-state-womens-volleyball-takes-down-rutgers-3-1/
Follow @onwardstate
Send this to a friend