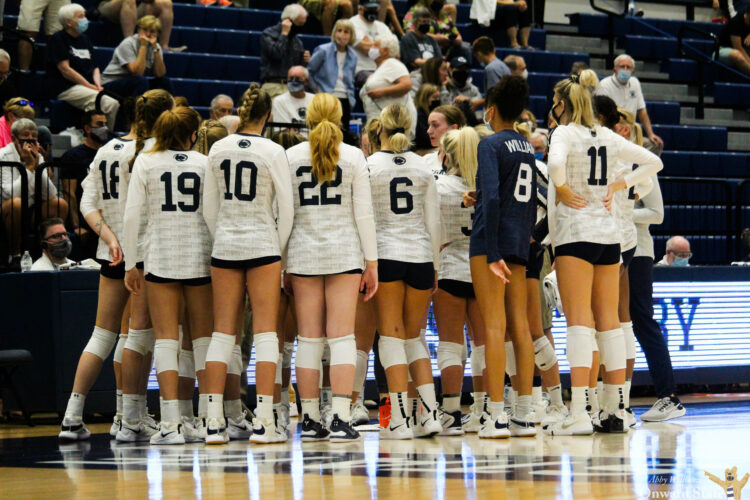 Fresh off a huge win over No. 12 Minnesota, Penn State women’s volleyball couldn’t get it done against No. 3 Wisconsin Saturday night.

The No. 14-ranked Nittany Lions (14-6, 7-3 Big Ten) battled fiercely against the Badgers (17-1, 9-1 Big Ten) but lost steam in the fourth and fifth sets. Strong performances from Kaitlyn Hord and Erika Pritchard weren’t enough to give Penn State a win at the UW Field House.

Wisconsin came out swinging against Penn State and bullied its way to a 7-3 lead early in the first frame. However, a 5-0 scoring run fueled by attack errors put the Nittany Lions on top 8-7 moments later. Although the Baders soon retook the lead, Penn State stormed back to tie them 16-16 and 18-18.

The Nittany Lions’ strong play helped them stave off Wisconsin’s set point and inevitably tie the Badgers 24-24. A kill from middle blocker Kaitlyn Hord and a huge solo block from Adanna Rollins helped Penn State complete the comeback and claim a 27-25 set one victory.

Wisconsin jumped out to a big lead to begin the second frame and remained in control until late. Thanks to another gutsy effort, Penn State caught up and tied the Badgers at 22, 23, 24, 25, 26, and 27 points apiece. Kills from Erika Pritchard gave Penn State its first leads at 28-27 and 29-28. The teams tied again 30-30, and ultimately, a kill from middle blocker Dana Rettke gave Wisconsin the 32-30 win in set two to tie the match 1-1.

The two teams’ heavyweight matchup continued in the third set through back-and-forth scoring without much separation, but Penn State took a 15-11 lead into a media timeout midway through the frame. Although the Badgers later embarked on a 6-0 scoring run to cut their deficit to 21-20, Penn State scored four straight points to ice the 25-20 set three win. A kill from right-side hitter Jonni Parker sealed the win and put Penn State up 2-1 in the match.

Wisconsin began the match’s fourth set with a 3-0 scoring run that largely benefited from two errant Penn State swings. The Badgers extended that lead to 7-2 before cruising their way through the frame as the Nittany Lions trailed a handful of points behind. A 3-0 run late in the set pulled Penn State within two points, but the Badgers won the frame 25-23 to send the match to a fifth and deciding set.

Penn State needed to quickly burn a timeout as the fifth set began once Wisconsin jumped out to a 5-1 lead. The Badgers never relented, though, and cruised to a 15-7 win to defeat Penn State 3-2.

Hord and Parker led the Nittany Lions with 21 and 20 kills, respectively. In her first game since September 26, outside hitter Erika Pritchard posted 10 kills, seven digs, and three blocks but committed a team-high 10 hitting errors, too.

It’s getting pretty tough to put into words how absolutely insane of a player Hord is. Tonight, she racked up a team-high 21 kills on a .475 hitting clip, all on top of seven total blocks and a dig. Her rock-solid productivity has single-handedly kept Penn State in close games, and the Nittany Lions will need to lean on her to stay alive as conference play continues.

Penn State will rest up and return home for a much-needed four-match homestand beginning with Maryland on Friday, October 29. First serve from Rec Hall is set for 7:30 p.m.

Share via
Penn State Women\'s Volleyball Falls To No. 3 Wisconsin 3-2
https://onwardstate.com/2021/10/23/penn-state-womens-volleyball-falls-to-no-3-wisconsin-3-2/
Follow @onwardstate
Send this to a friend