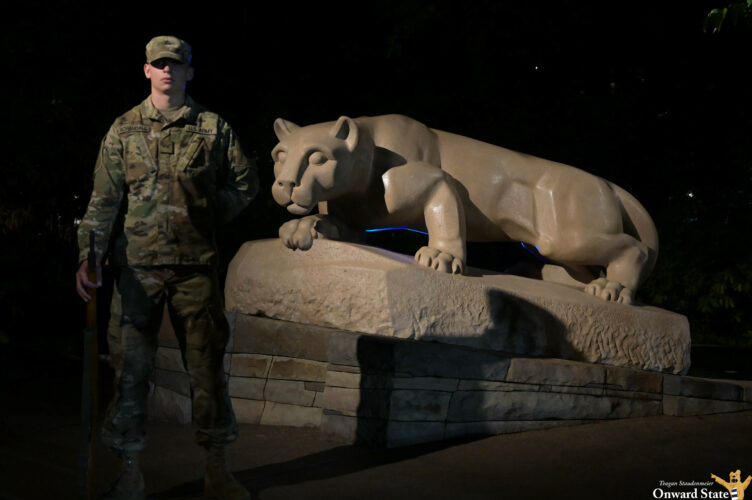 For the first time in about two years, Penn State recognized one of its most time-honored Homecoming traditions — the annual Guard the Lion Shrine event — Friday night.

Every year, Penn State sweetheart Sue Paterno attends the event and shares the story of why Penn State’s Army ROTC program guards the Symbol Of Our Best on the Friday night of Homecoming. Syracuse fans once covered the Lion Shrine with orange oil paint, which was very difficult to clean off, a year after Paterno and a friend painted it with latex paint (that was much easier to get off the shrine) to fire up Penn State’s fanbase.

These days, the Lion Ambassadors work to host the annual event. Even decades later, Guard the Lion Shrine remains one of the best parts of Homecoming.

Infographics scattered around the Lion Shrine’s vicinity shed light on the tradition’s history. It’s remarkable reading about how far both the shrine and its traditions go back.

Throughout the night, ROTC members guarded the shrine in 30-minute intervals.

A little while into the program, Sue Paterno stopped by to remind folks why we guard the Lion Shrine in the first place. Nobody tells stories quite like her!

I mean, just look how captivated everyone was while Paterno spoke. Everyone loves SuePa. It’s a fact!

The Blue Band’s drumline also stopped by the shrine to play for the crowd of Penn Staters. The group got plenty of practice in before the Nittany Lions’ game against Illinois on Saturday.

Other festivities included face-painting and a performance from the Singing Lions, one of Penn State’s oldest choir groups.

Of course, the night wasn’t complete without an actual appearance from the Nittany Lion, who attentively listenet to Paterno’s speech and posed for photos with fans.

Penn State’s Homecoming festvities wrap up with the Nittany Lions’ football game against Illinois at noon on Saturday, October 23.