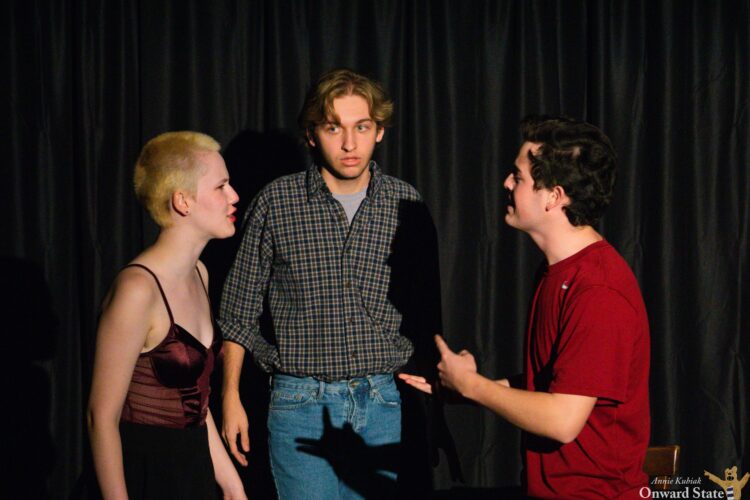 No Refund Theatre is back again with another production in its fall catalog. This week, the organization presents “The Intimate Life of Eliza Logan.”

Written and directed by senior Blake Pierson, the story sheds light on the spectrum of sexuality, encapsulating the brutal reality of modern-day struggles with internal conflicts.

In this reality, the production centers on a female protagonist defining sexuality in modern times. Hoping to pursue her dream of becoming a filmmaker, Cynthia Lee quits college and joins the adult film industry. Pursuing this career option, Lee becomes Eliza Logan, a characterized persona that finds herself losing humanity as she is objectified and exploited by society.

Exploring relationships in the ever-changing 21st century, the story tackles themes of domestic violence, gender inequity, and sexual fluidity with graceful explanation and strives to emphasize the strength in oneself only present to the most courageous souls. Defining clear consent, reproductive education, and the spectrum of sexuality, one message is clear: Building lasting relationships is a lifelong pursuit, but self-discovery is always the first step.

Incorporating live theatre with interpretative, pre-recorded interviews, the production juxtaposes the current life of Cynthia Lee with the unsure Eliza Logan. In this comparison of the same protagonist at different times in life, the story presents the unique struggle of self-discovery within sexuality and relationships.

Within this unapologetic presentation of fluidity, director Blake Pierson revealed his mentality when creating these two personas within the same character.

“I wanted to give light to everything. All the good, all the bad,” Pierson said.

Originally planning on directing an alternative title, Pierson created his own work in the pursuit of honesty and achieved that goal through truthful representation of sexual struggles for young people.

When casting his show, Pierson found a young cast filled the roles and worked tirelessly to stress the comfortability of his team throughout the entire process. Formulating strong relationships within this new community was important to the process, yet utilizing a youthful cast was an asset to the production team.

“It’s much easier to build a relationship, a good one from scratch,” the director said. “I want them to be confident on stage.”

In addition to fulfilling this goal of teaching the next generation of actors, putting on The Intimate Life of Eliza Logan allowed Pierson the opportunity to share his work with the Penn State community.

“I just love hearing how people interpret things. I started writing this in December last year, I’ve heard the lines…I’ve written every line!” he laughed.

Still, Pierson founded a collaborative environment, and was grateful for others’ opinions in formulating this production.

“You should be willing to take advice from everyone,” he explained. “That’s been really rewarding, to see people think about the stuff I spent all my time writing.”

Working with his team was a key part of the process for Pierson, and his cast reflects his joy in teamwork as well.

Playing the role of Eliza Logan, Plante was initially concerned to join the production, especially as a first-year student. After reading the synopsis, they turned away from the show, yet turned back after reading the trigger warning and content warning.

“I have to be a part of this, cause this is a story that has to be told,” they thought and shared with us after the performance.

After finding inspiration within the story itself, Plante looked inward to tell the story of self-discovery and proud sexuality. They explained an often painful truth faced by the LGBTQ+ community when defining sexual preference, especially within a society that is not always accepting of diversity.

“Being queer, it’s a little bit more difficult to acknowledge that, especially when other people are saying no,” they explained.

When comparing this struggle of the LGBTQ community with her own character, Plante drew a parallel.

“In a way, she’s saying no to herself as being a person, because she views herself as an object, which is something I feel like a lot of female people go through,” Plante said.

Even with this lack of humanity within the story, feminism ran true as a clear theme. While exploited and challenged within the adult film industry, Eliza Logan maintains self through individual choices and pursuits without fear of retaliation, an obvious indication of female strength even through societal struggles. In addition to feminist values, the production itself presented an opportunity for inclusivity and acceptance. From this, another bold message rang true.

“Don’t let other people stop you from being who you are,” Plante said simply.

In this path to confidence, Jonathan Yourchak, a second-year student who played multiple roles, continued the message.

“There’s a lot more to someone underneath the surface, just beyond their looks,” Yourchak said.

Taking this idea beyond the production to the organization as a whole, Yourchak explained the message behind No Refund Theatre.

“It welcomes anybody with any background with open arms. I think that creates a safe space, regardless if you want to be on stage, or backstage, or even in the audience,” Yourchak said. “It’s also fun to get involved with a community that’s just welcoming to everybody. That’s kind of refreshing to see, after stuff we’ve seen recently.”

Following the “Love Is Louder” event presented by Penn State’s Center for Sexual and Gender Diversity, this production comes to campus at just the right time. Unapologetic in its portrayal of the real-life struggle for sexual freedom, “The Intimate Life of Eliza Logan” serves as the pursuit of honesty for societal acceptance. Displaying the spectrum of sexuality, this production champions self-discovery free of judgement and proud individualism, bold and bright for the world to see.

As always, NRT performances are free of charge. An adult content warning is emphasized for sexual content and language, as well as a trigger warning for sexual violence. 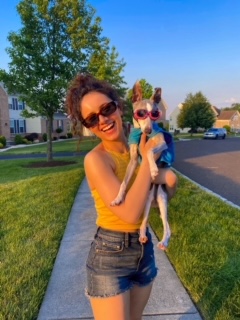 Lizzie Palmieri is a current sophomore with an undecided major from Bucks County, Pennsylvania. Ask her about Disney World, Diet Pepsi or dancing on the Jumbotron at Beaver Stadium. When not causing general trouble, Lizzie enjoys playing golf, performing in theatre, and being the CEO of reorganizing the fridge. Her favorite thing to do is hang with her sassy sidekick, 17-year-old Italian Greyhound, Macaroni. Follow her on Twitter @lizziepalmieri if your deepest desire is bestie vibes only. 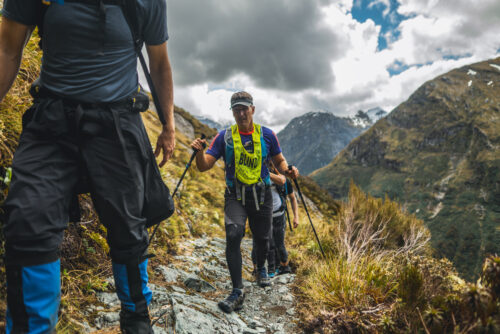 How One Blind Penn Stater Is Changing Lives By Changing Minds

From climbing mountains and running marathons to starting non-profits, Dan Berlin is challenging the world to recognize ability within disability.

Dreams Come Blue: The Story Of The Blue Sapphire

Share via
NRT Presents: \'The Intimate Life Of Eliza Logan\'
https://onwardstate.com/2021/11/04/nrt-presents-the-intimate-life-of-eliza-logan/
Follow @onwardstate
Send this to a friend